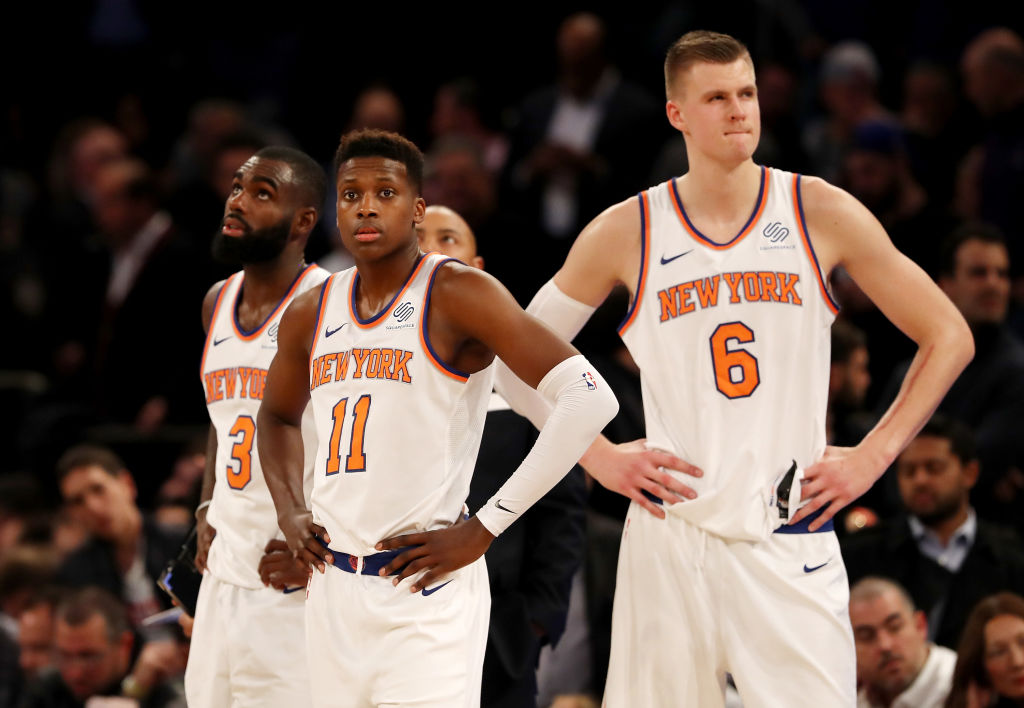 Kristaps Porzingis is becoming human. He’s missing shots, slowing down, and having difficulty adjusting to the new attention from opposing defenses. Everyone, including Porzingis himself, knew this was coming. When Carmelo Anthony was traded, Porzingis subsequently emerged as the primary focus for the defense going forward. Part of the reason why the 22 year has come to shock the entire NBA landscape this season is because he’s continued to rise above the pressure and succeed at an elite level that positions him with some of the best players in the league (statistics wise).

But alas, fourteen games in and opponents are finally beginning to figure out how to contest him properly. Following a poor shooting night in New York’s loss to the Cavaliers, Porzingis’ started off rather slowly on Wednesday against the Jazz. He missed three shots early in the first quarter and couldn’t find his rhythm. His ineffectiveness caused the Knicks to play with less energy and thus, Utah soon got out to what became a double-digit lead.

Often times, Porzingis’ hot streaks have served as a springboard for the Knicks to get off to a positive start on a nightly basis. The fact that he couldn’t get it going had an opposite effect on his team. No one seemed to step up in lieu of the big man’s struggles. For the first time this season, Jeff Hornacek seemed to make some questionable decisions with his rotation. The reserves he called upon came in with little to no energy, and it was often difficult to identify a go-to scorer on the court. Frank Ntilikina arguably had his worst game of the season, picking up four poor fouls and making a questionable decision with time expiring to run the ball up and miss an easy layup, as opposed to holding on and letting Utah foul.

Despite Ntilikina’s naive play, New York still walked away with another come from behind victory of 106-101. But after trailing for three quarters, how did the Knicks get the win? Tim Hardaway Jr. came alive in the second half, attacking the basket like a maniac. Going to the line for a game-high 10 free-throws, keeping the defense on its toes made the guard much more effective than hoisting up lower-percentage shots across the perimeter.  He did, however, hit a couple of timely three-point field goals to help New York seal the deal. He led the team with 26 points and 6 assists, while also adding 6 rebounds. Porzingis fed off of his teammate’s rhythm and added a few key buckets in the final period. He finished with 22 points, and Courtney Lee was also clutch, adding 19. Kyle O’Quinn and Lance Thomas both came up with key defensive stops down the stretch. With Ntilikina struggling, Jarrett Jack played 28 minutes — his third highest of the season, and most since November 3rd. He provided a steadying hand during a key run.

This was yet another thrilling victory for New York. The key to this one, however, went far beyond letting Porzingis awe the home crowd. The Knicks can hopefully learn from this win, understanding that it takes a collective effort and that a healthy combination of contributors need to step up (and continue to play with full on energy) even if their budding star is struggling.