Recap: Celtics Win a Wild One Against Warriors to Extend the Streak 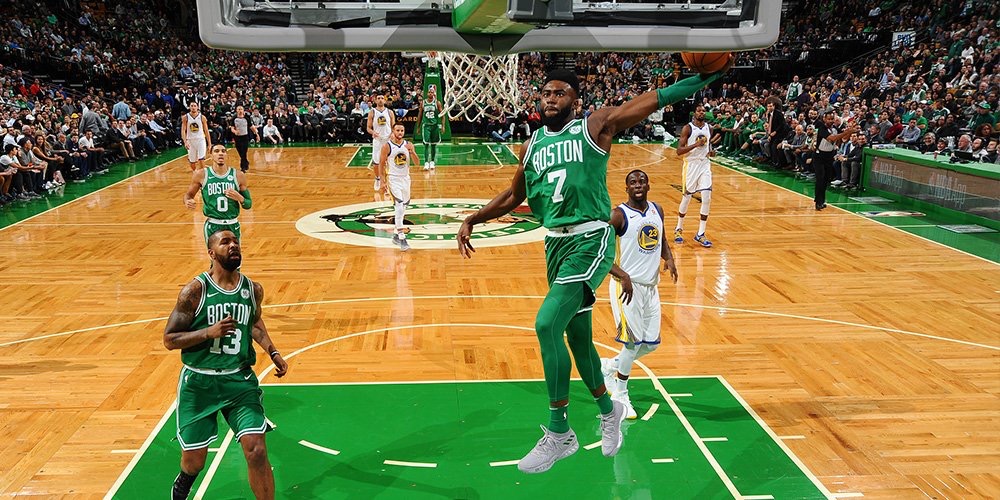 Recap: Celtics Win a Wild One Against Warriors to Extend the Streak

Wow. What a game.

The Celtics shot just 33% from the field, made only 7 shots from deep on 32 attempts, and found themselves down double-digit deficits TWICE. Yet this team still found a way to beat the best team in basketball thanks to their otherworldly defense (holding Curry to 3 of 14 shooting and just 9 points) and an unbreakable will (led by a mourning Jaylen Brown, who scored a team high 22 points just one night after learning his best friend had died). Final Score: 92-88

Damn, that was fun – let’s jump right into it.

The game was plagued by ugly shooting from the jump. After the Celtics hung around for the first few minutes, the Warriors were able to put together a 10-0 run while Boston had missed 8 of 9 attempts from the field early in the game. The Celtics consistent bricks allowed the Warriors to get out in transition and feast– the Warriors had the edge in fast break points after Q1 by a wide margin (10-2). Kyrie and Jaylen were each aggressive on the offensive end early, but had little to show for it in way of points. Nick Young ended Q1 by scoring his team’s final 7 points, and the Celtics were trailing 28-18 heading into the second quarter. Honestly, though, when your team just shot 32% from the field overall.. a 10 point deficit didn’t seem too bad.

Unfortunately, just about two minutes into Q2 and we’re reminded how cold the Celtics were once more. Boston had missed 8 of their last 9 attempts (AGAIN), this time allowing the Warriors to go on a 12-0 run which stretched their lead to a game high 17 points.

Boston was only able to make the game close again due to their dedication to get to the basket. After not attempting a single free throw in Q1, Boston had made 12 of 13 from the charity stripe in the second quarter and clawed their way back into the game. Jaylen Brown, in particular, remained aggressive despite starting the night 2 of 8 from the field. Once he made his first shot from deep, he gave himself a heat check the following possession but was blocked. Jaylen stayed with the play, grabbed the ball, and converted for 2 more under the hoop. On the other end, he blocked Klay Thompson and allowed for Horford to go coast-to-coast in transition to cap a 15-3 run for the Celtics. You could see the confidence oozing from the 2nd-year pro despite his less than stellar shooting performance thus far.

The Warriors had missed 8 straight at the end of Q2, and KD/Steph combined to go 5 of 18 from the field, but GS still clung to a 47-42 lead heading into Q3 thanks in large part to the Celtics piss-poor shooting (4 of 19 from deep and 30% from the field overall) and uncharacteristically dumb plays (such as Marcus Smart’s offensive goaltend to reverse a Kyrie layup at the end of the half). Nevertheless, Boston felt confident going into the second half trailing by 5.

Marcus Smart, not very smart on this play 🤭 pic.twitter.com/LRsNlnOqms

The Celtics had the good fortune of Steph Curry picking up his 4th foul early in Q3, but Boston still allowed their 5 point deficit to grow into 17 despite Curry sitting on the bench. The Celtics were frustrated, but none more than Kyrie Irving who, at that point, had shot just 2 of 10 from the field. In fact, Irving was so frustrated that he took off his protective face mask for the remainder of the game. Jaylen Brown wasn’t going to let his team go down like this, though. Brown turned in his most aggressive game as a pro by scoring 11 of his 22 points in Q3, and lead his team all the way back to tie the game with an unfathomable 19-0 run against these Warriors.

Just as Coach Stevens has stressed all year – it all started on the defensive end. Jaylen and the C’s first mounted their comeback by forcing a backcourt violation on KD. Brown then made an elbow jumper followed by a couple of 3’s. When Smart missed an ugly shot from deep (a recurring theme for his night), guess who was there to scoop up the rebound? Mr. Brown, who was fouled on his layup attempt and made both FTA to complete an incredible string of plays. The Celtics and Warriors found themselves tied at 68 heading into the fourth quarter.

Boston kept up the pressure and was fueled, in part, by a raucous TD Garden crowd that could taste the looming come-from-behind victory in the air. The teams volleyed leads back and forth during the final frame, marking a fitting end to an insane night. The difference in the end, as it has been so many times already this season, was Boston’s ability to defend.

When an errant pass from Marcus Smart led to another transition 3 for the Warriors, Boston found themselves down 88-86 with just under 2 minutes to go. It was officially gut-check time. Boston clamped down on D and Kyrie turned on the jets on the other end to get to the free throw line on consecutive possessions. He drained all 4 attempts and the Celtics claimed a two point lead with :14 seconds left. The Warriors called a timeout, and Stevens made a defensive substitution – Morris for Irving. The Warriors ran a play for KD in which he shot a baseline jumper, but Marcus Morris was there to put a hand in his face and the shot clanged off of the rim. Al Horford scooped up his 11th rebound and threw an outlet pass to rookie Jayson Tatum, who was promptly fouled. Tatum sank both attempts to stretch the Celtics lead and effectively iced the game (Noteworthy: the Warriors entered the bonus early in Q3 and the Celtics made them pay for it dearly – 33 of Boston’s 92 points came via the FT line including the team’s final 8). Kyrie finished the game 4 of 16 from the field, but he scored 11 of his 16 total points in the final quarter and led his team to victory when it mattered most.

Hot: Jaylen Brown. Oooooh-wee! We mentioned Jaylen started 2 of 8 from the field, but did we mention that he then proceeded to make 5 of 10 for the rest of the night? It’s great to see a fighters mentality from such a young man, especially considering the fact that he had lost a long-time friend last night. Jaylen finished with 22 points and 7 rebounds and was crucial in delivering the energy needed on both sides of the floor. One example:

Jaylen Brown turns defense into offense and jumps into tonight's @JetBlue Play of the Game! pic.twitter.com/480NZY8bEa

Not: Marcus Smart aka Dr. Jekyl and Mr. Hyde. He made exactly 0 shots from the field on 7 attempts, and while his defensive ability still brought him to a +15 (trailing only behind Al Horford who was a team high +16 thanks to his 18pt 11reb performance) – the Celtics almost lost the game due to stupid turnovers and terrible shot selection from Marcus.

Let's all try to never be like Marcus Smart on this sequence… pic.twitter.com/f9Z6gIrBhw

This tweet from the boss pretty much sums it up:

Let's just be clear about what happened tonight:

The Boston Celtics trailed the Golden State Warriors 66-49 with 4:59 remaining in the 3rd.

A crucial put-back dunk by Horford to tie the game in the final frame:

Jaylen Brown is getting it done for the C's! 🔥🔥🔥 pic.twitter.com/tLadQgBPVQ