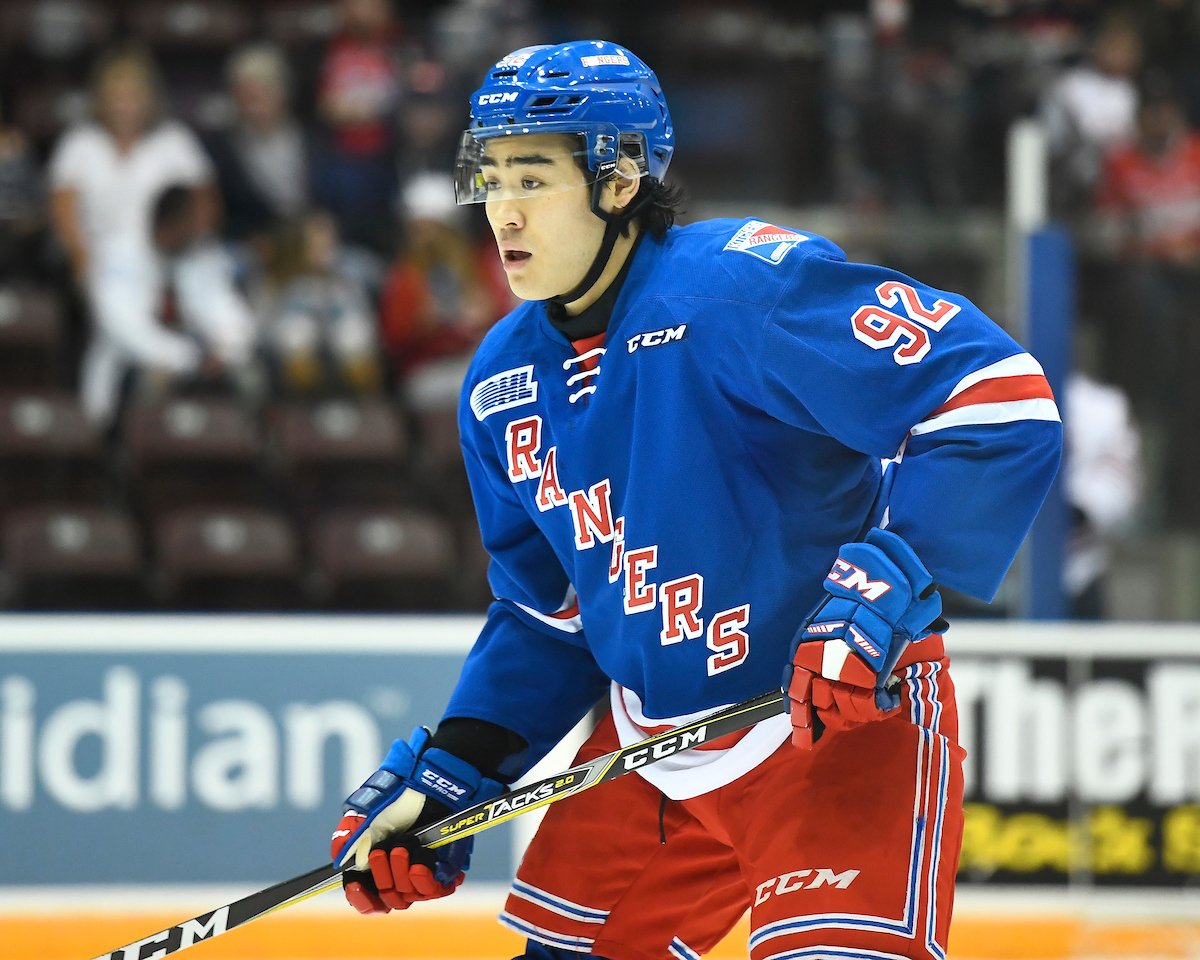 Greetings all, time for a quick recap from around the CHL and NCAA prospects for the CBJ. We’re skipping the Monsters from lat week because…it was not a good weekend in Iowa. So let’s move on to some more positive news.

Kole Sherwood-Kitchener Rangers (OHL)
Season Stats 8GP 3-5-8 +1 8PIM
Last week the Rangers took part in a home and home with the Windsor Spitfires. First up on Friday in Kitchener, Kole picked up an assist on a goal by a player who appears to becoming his new partner in crime, Adam Mascherin. Kole passed to Joseph Garreffa who found Mascherin. He went bar down to make it 1-1. After Mike Petizian’s first career goal, Kole picked up an assist when he took a drop pass and came off the wall to find team captain Connor Bunnaman in front who made it 3-1. The teams traded goals but the game ended in a Rangers 4-3 win. In honor of Canada’s Remembrance Day, the Rangers wore these special jerseys

In the rematch the next night, the Spits got off to a hot start taking a 3-1 lead before Kole would strike. Late in the second period, Adam Mascherin and Greg Meireles worked a give and go with Mascherin finding Kole just above the circle where he hammered a shot for his 3rd of the season to make it 3-2. The Rangers ultimately fell in overtime by a score of 6-5.

Maxime Fortier-Halifax Mooseheads (QMJHL)
Season Stats 20GP 13-15-28 +11 12PIM
After missing time last week with a shoulder injury, Maxime returned for a game against the Baie-Comeau Drakkar and little brother Gabriel. The pair took the opening faceoff and some of Gabriel’s teammates think Maxime may have gave it to him. Early in the first with the Herd on the power play, Maxime fired a shot that was tipped by Otto Somppi to make it 1-0 in a 3-2 Mooseheads win. Maxime missed the rest of the team’s games last week due to his shoulder injury. In off-ice antics, here’s an interview with Maxime that includes him talking about signing with the CBJ.

Vitaly Abramov-Gatineau Olympiques (QMJHL)
Season Stats 16GP 12-13-25 +5 21PIM
Vitaly and the Piques opened the week with a game against Shawinigan. In the second with Gatineau leading 1-0, Vitaly won a footrace to the puck and passed to Pier-Olivier Lacombe at the point. He fired a blast to make it 2-0 in a 6-1 Gatineau win.

In the team’s final game of the week, after a penalty shot goal Vitaly picked up an assist on Will Thompson’s goal to make it 2-0. Early in the third with Gatineau leading 3-1, Vitaly and Mitchell Balmas skated in on a two on one at high speed with Balmas passing to Abramov and firing a shot to make it 4-1. Late in the third after two Tigres goals, Vitaly got the puck and fired from his own blueline to make it 5-3. Gatineau added another empty net goal to make it 6-3, in the win Vitaly was named first star. Some believed it might have been Abramov’s last game with the team. There are two reasons people believe this: one, just after this game Abramov was off to the Maritimes to meet up with Team Russia to play in the team’s two games against Team QMJHL. Two, the rumor mill makes it sound like the deal could be done by the end of this week. (Spoiler alert – the trade was confirmed Friday Nov. 17 – we’ll have more on that transaction in a separate post)

Robbie Stucker-Chicago Steel (USHL-Committed to Colorado College)
Season Stats 11GP 1-7-8 +1 16PIM
It was a light week for Robbie and the Steel with only one game against Dubuque. In the second with the Steel trailing 1-0, off a faceoff Robbie took a pass and fired a shot that was tipped by Samuel Bucek to make it 1-1 in a 3-2 Steel win.

Kale Howarth-Trail Smoke Eaters (BCHL-Committed to UConn)
Season Stats 21GP 14-21-35 22PIM
Kale opened the week by adding to his season long pointless streak. He’s now gone two games without a point…it’s been a good year for Kale. In the Smokies next game against the Salmon Arm Silverbacks (great name btw), Kale had his third career four point game collecting a goal and three assists. Kale’s 35 points are currently tied with teammate Ross Armour for the lead.

Tyler Bird-Brown University Bears (ECAC)
Season Stats 6GP 2-0-2 -5 2PIM
Tyler and the Bears opened the weekend with a game against Clarkson. In the 5-3 loss Tyler was held without a point.

Up next in a game against the St Lawrence Saints, in the second period it was posted on twitter that Tyler had scored the Bears second goal but it would be later changed to teammate Charlie Corcoran. After a Saints goal, and with the Bears on the power play, Max Willman sent a no look pass to Corcoran who fired to Tyler in the slot. His shot clinched the Bears a 3-1 victory.

Peter Thome-North Dakota (NCHC)
Season Stats 4GP 2-0-2 .929Sv % 1.92GAA
In the biggest games involving ND and Miami last week, we had a prospect match up involving Carson Meyer and Peter Thome. Starting off on Friday night, Peter put on a clinic while getting some run support as North Dakota gave him a 3-0 lead before the RedHawks could score. North Dakota added another goal to give Peter his second win of the season, in the win Peter would make 27 saves.

It should come as no surprise Peter has been a story since his debut. Here’s what people have said. First is an article talking with North Dakota Baseball coach Jeff Dodson (I can explain why they spoke to him), comparing Thome’s debut to cousin Andrew when he debuted for the Sioux. Another article compared what Peter is going through now with current goalie coach Matt Hrynkiw who did the same thing two seasons ago filling in for Cam Johnson.

In the rematch, it would be the opposite kind of game as the RedHawks took a 2-0 lead before the Hawks would roar off three straight to take the lead. But, North Dakota allowed a late extra attacker goal sending the game into overtime and then a shootout. The shootout went for four rounds with North Dakota finally getting a score. Miami would need a goal to continue the shootout and who would Enrico Blasi send out…fellow Jackets prospect Carson Meyer, and well let’s go to the gif. In the shootout win, Peter stopped 20 shots along with all four in the shootout. As for next week, it’s rivalry week as North Dakota travels to Denver for a series against the #1 team in the country, the Denver Pioneers. that matchup will be #1 vs #3. Its unconfirmed if Peter will continue to start for North Dakota as Cam Johnson has begun skating.

A quick update on our international prospects playing in various tournaments last week.

Emil Bemstrom had three points helping Sweden win the U20 Four Nations Tournament. He collected all three points in a 6-4 win over Finland.

Vladislav Gavrikov was held without a point while playing for Russia in the Karjala Cup held in Finland.

Alexandre Texier played for France in a Four Nations Tournament held in France. Texier sat out an overtime loss to Slovenia, but in the team’s next game against Belarus, Alexandre would not only play but go straight to the Roosters top line. He picked up an assist on the team’s opening goal of a 3-2 overtime loss. In the tournament’s final game, Texier remained on the team’s top line but went without a point in a 3-1 loss to Latvia.

Well that’s all folks! As for next week I’ll be back with hopefully a full recap, but it could be a two week recap coming, we’ll see what happens