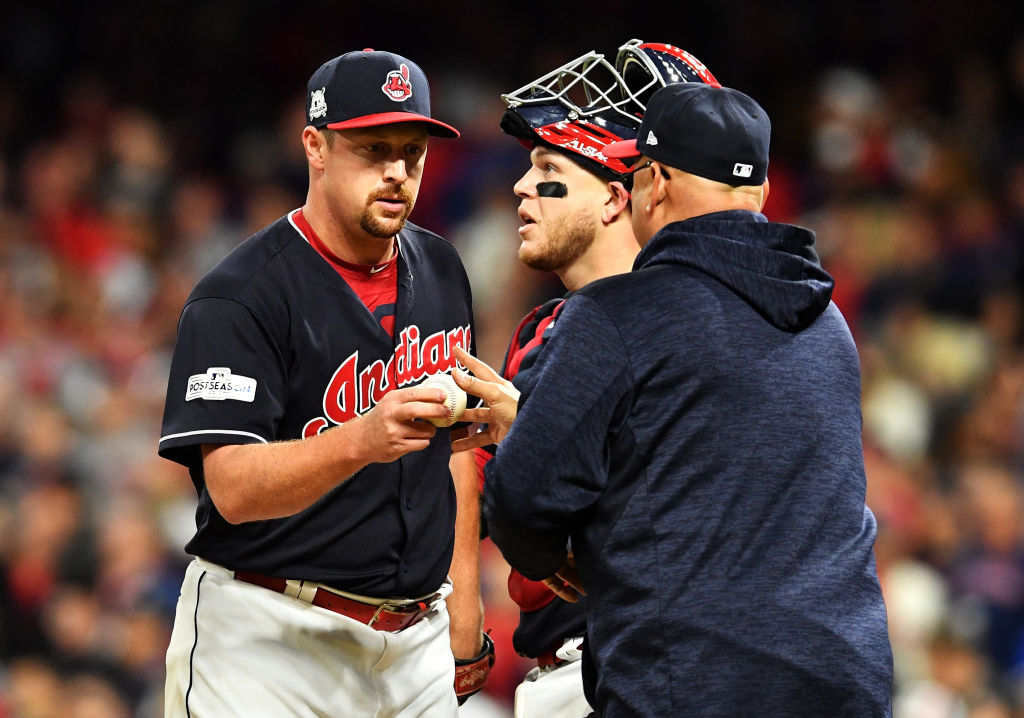 Ever since he took over as General Manager for the New York Mets in 2011, Sandy Alderson has avoided long term deals to relievers. Alderson has always had a philosophy of building bullpens on the cheap since relievers are volatile commodities from year to year, with many non elite options having wild swings in performance. That philosophy may have been fine while the Mets weren’t contending, but their bullpen has cost them a lot of games over the past few seasons while other contenders have gone deep in the playoffs on the strength of their relievers. Alderson finally appears willing to embrace the “bullpenning” movement and is now prepared to give free agent relievers multi-year contracts, MetsBlog.com reports.

CLEVELAND, OH – OCTOBER 11: Manager Terry Francona #17 pulls Bryan Shaw #27 of the Cleveland Indians from the game in the eighth inning against the New York Yankees in Game Five of the American League Divisional Series at Progressive Field on October 11, 2017 in Cleveland, Ohio. (Photo by Jason Miller/Getty Images)

While the Mets aren’t expected to go after the top tier free agents, like closers Greg Holland or Wade Davis, they are expected to be in pursuit of the next wave of relievers. That group includes former Met Addison Reed, Dodgers’ postseason iron man Brandon Morrow, and Indians’ set up man Bryan Shaw. Shaw makes a ton of sense for the Mets, who employ his former pitching coach (Mickey Callaway) as their new manager. The above group of relievers is expected to command deals between two and four years in length, and it appears the Mets are willing to give at least one of them a contract of that size.

This is a significant change from even last winter for Alderson, who only gave one guaranteed year to Jerry Blevins and Fernando Salas while ignoring the rest of the market. This left the Mets’ bullpen undermanned, and combined with the suspension of Jeurys Familia and the team’s decision to go easy on their starters early exposed the lack of depth early on. With Callaway looking to ease the burden on his starters by routinely removing them after two times through the batting order, the Mets are expected to carry an eight man bullpen for much of the season. The Mets only have three quality relievers right now, so they need to add at least two more viable arms to make this strategy effective. Offering multi-year deals should allow Alderson to accomplish that objective, which can only help the Mets’ chances of winning in 2018.