New York Mets Have Some Interesting 40 Man Decisions To Make 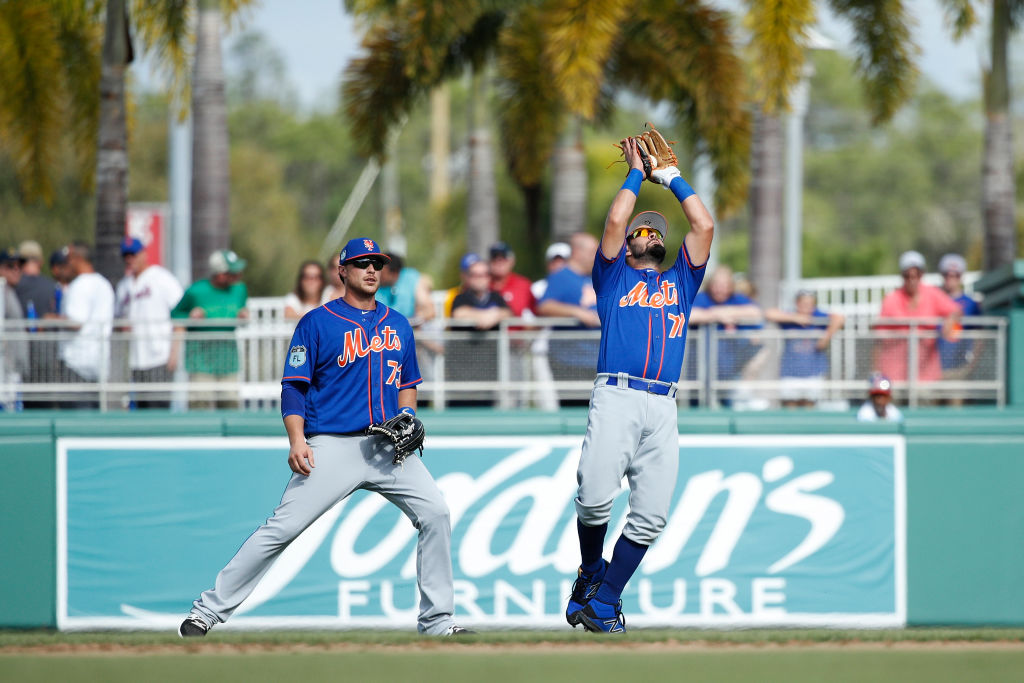 New York Mets Have Some Interesting 40 Man Decisions To Make

The deadline to protect eligible prospects from the Rule V draft is tomorrow, and the New York Mets will have some interesting decisions to make on that front. The Mets currently have 35 players on their 40 man roster, meaning they can protect up to five prospects from the draft, but 40 man roster spots will be at a premium since they need to add major league talent to improve the roster. Here’s a look at some minor leaguers who are draft eligible that the Mets might consider protecting(Note: All prospect rankings come from MLB.com’s list of the Mets’ top 30 prospects):

FORT MYERS, FL – FEBRUARY 24: Luis Guillorme #77 of the New York Mets catches a pop fly in shallow right field in front of Travis Taijeron #73 during the game against the Boston Red Sox at JetBlue Park at Fenway South on February 24, 2017 in Fort Myers, Florida. The Mets defeated the Red Sox 3-2. (Photo by Joe Robbins/Getty Images)

IF Luis Guillorme: Guillorme recently received the Mets’ Sterling Award, the equivalent of a team MVP, for AA Binghamton. In 128 games for the Rumble Ponies in 2017, Guillorme batted .283 with a solid .376 on base percentage, which is an intriguing development. Guillorme has always drawn rave review for his defensive ability, which has helped him become the team’s 11th best prospect according to MLB.com’s prospect rankings. If the hitting development continues, the Mets could definitely shift Guillorme to second to form an elite defensive infield with Amed Rosario in a few years. Guillorme could be a potential trade chip in a deal to help the Mets acquire a veteran second baseman, such as Cleveland’s Jason Kipnis, so don’t be surprised if the Mets leave him off the 40 man roster and deal him before the Rule V Draft.

IF Jhoan Urena: After not doing much in the minors prior to 2017, Jhoan Urena had a breakout season. Urena batted .282 with 11 homers and 62 RBI’s in 122 games for High-A St. Lucie, which earned him a promotion all the way to AAA Las Vegas. The Mets left Urena off their 40 man roster last season, which wasn’t an issue when he hit .225 with St. Lucie, but the fact Urena made it to Triple-A could entice a team to take a flyer on him in the draft. Urena is currently rated as the Mets’ 15th best prospect.

RHP Corey Oswalt: Like Urena, Corey Oswalt put together a breakthrough campaign in 2017 after struggling in previous minor league stops. Oswalt spent 2017 with AA Binghamton, where he went 12-5 with a 2.28 ERA in 24 starts, including two complete games and a shutout. That stellar showing led the Mets to name Oswalt the organization’s Minor League Pitcher of the Year, and he is eligible for the Rule V draft for the first time this winter. MLB.com currently ranks Oswalt as the Mets’ 27th best prospect, but he is a strong candidate to get added to the 40 man roster since the Mets need more quality pitching depth.

RHP Mickey Jannis: Mickey Jannis is an intriguing pitching prospect for the Mets. After failing as a conventional starter, Jannis decided to try using the knuckle ball and has managed to resurrect his career. The Mets took a shot on Jannis after experiencing tremendous success with R.A. Dickey, giving Jannis plenty of time to develop in the minors. Jannis had a solid season for AA Binghamton, going 8-7 with a 3.60 ERA in 21 starts, and he has carried that success over to the Arizona Fall League. The Mets sent Jannis to the AFL to see how he would fare against some of the game’s elite prospects, and Jannis has passed the test with flying colors, going 1-3 with a 2.33 ERA in six starts. Jannis’ strong season could lead an organization to take a shot on him in the Rule V draft, so the Mets may have to consider keeping him on the 40 man roster to avoid losing him.

RHP Gerson Bautista: Gerson Bautista was one of three relief pitching prospects the Mets acquired from the Boston Red Sox in the Addison Reed trade. Although he was known for his power arm, Bautista experienced limited success in the Red Sox’ system, going 3-2 with a 5.16 ERA prior to the deal. Things clicked for Bautista in St. Lucie, where he impressed by pitching to a 1.26 ERA in 10 appearances and striking out 20 batters in 14.1 innings pitched. Bautista is eligible for the Rule V draft for the first time, so expect the Mets to protect their 30th rank prospect since they asked for him in the Reed deal.

C Ali Sanchez: One more guy worth watching is catcher Ali Sanchez, who is currently rated as the Mets’ 15th best prospect. Sanchez played the whole season for Low A Columbia, where he batted .231 in 56 games for the Fireflies. The Mets like Sanchez’s defensive capabilities and his potential to develop on offense, but they already have three catchers on the 40 man roster in Travis d’Arnaud, Kevin Plawecki, and Tomas Nido. Adding a fourth doesn’t seem very practical, and since Sanchez is so far from the major leagues the Mets might gamble by leaving him exposed for this year. The odds of a big league club plucking a catcher from Low A and keeping him on their active roster for the entire season are very slim, so the Mets should be safe if they don’t protect Sanchez.

In the end, the Mets will likely protect Oswalt and Bautista at minimum. Guillorme is a toss up candidate since he might be trade fodder, but they will likely add him to increase their options. The trickiest calls are Jannis and Urena, both of whom posted breakout campaigns after struggling in the minors prior to 2017. If push came to shove, the Mets would probably protect Jannis first since he has the potential to get outs at the big league level with his knuckleball, which isn’t something you can easily find.