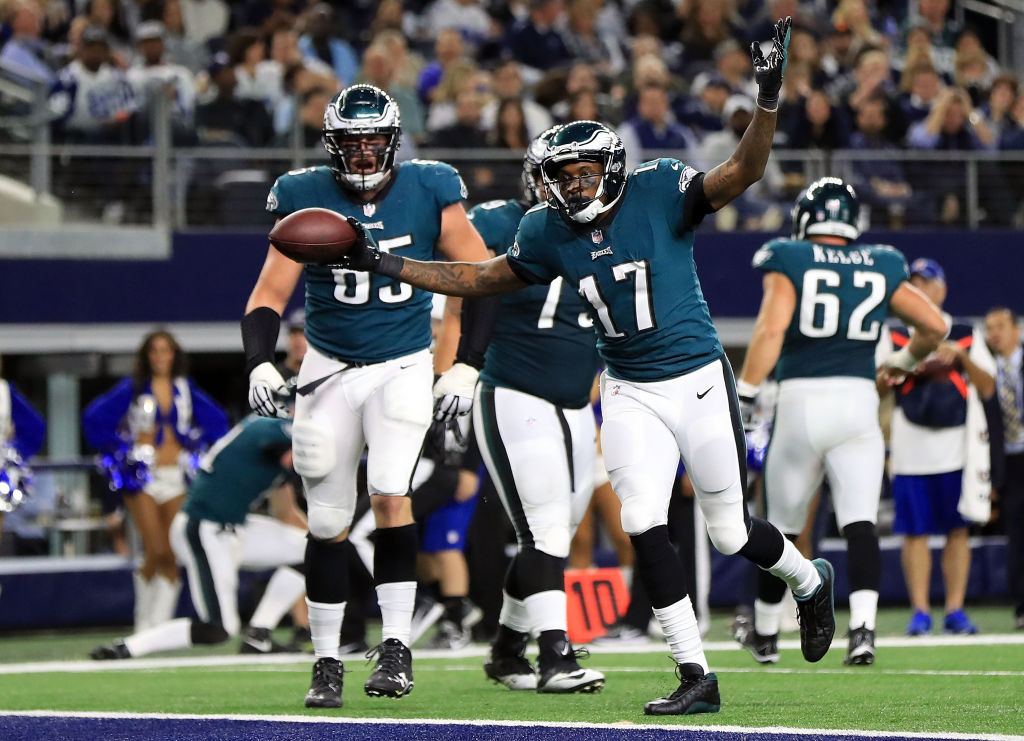 After getting out to an 8-1 start to begin the regular season, the Philadelphia Eagles had a well-deserved bye last week. However, they were back in action on Sunday night taking on NFC East division rival, the Dallas Cowboys. It was a tough first half for both teams, but the Eagles were able to dominate in the second half and win 37-9.

Dallas got off to a quick start as rookie wide receiver Ryan Switzer returned the opening kickoff 61 yards to give the offense good field position. However, the Eagles’ defense did their job, shutting down Dallas’ offense on third down. Kicker Mike Nugent made a 48-yard field goal, giving the Cowboys an early 3-0 lead.

Nevertheless, Dallas’ early lead would not last for long as the Eagles’ offense put together an eight-play, 75-yard scoring drive, which featured six first downs. On the seventh play of the drive, quarterback Carson Wentz hit running back Kenjon Barner for a 22-yard reception down the sideline to put the Eagles inside the five-yard line.

Following the ridiculous catch by Barner, Wentz gave the ball back to him and he punched it for a four-yard rushing touchdown, putting the Eagles back up on top 7-3.

The Cowboys’ offense struck back on their second drive of the game as running back Alfred Morris ripped off runs of 22 and 11 yards. Later in the drive, Dallas quarterback Dak Prescott got involved in the running game too, taking the keeper for 11 yards and putting his team inside the 15-yard line.

However, just like the opening drive, the Eagles’ defense held firm as Prescott went after cornerback Ronald Darby on third down, but to no avail, Prescott could not hit wide receiver Dez Bryant for a touchdown. Dallas would have to settle for another field goal, making the score 7-6.

With 1:15 to go in the opening quarter, Prescott would make his first of many mistakes in the game. The former Mississippi State product was looking for wide receiver Terrence Williams to make a play on the ball but tipped it in the air, which was intercepted by safety Rodney McLeod.

Thanks to the McLeod interception, the Eagles’ offense had great field position. But they could not capitalize on it as kicker Jake Elliott missed a 34-yard field goal to end the first quarter.

In the second quarter, Prescott made his second mistake of the game, thanks to rookie defensive end Derek Barnett applying pressure and forcing him into another interception. This time around, Darby was the recipient of the Prescott errant pass. The Eagles’ offense could not do anything with the latest Prescott gift as they had a quick 3-and-out.

After holding the Eagles to no points, Dallas put together a methodical 15-play drive that ate up 7:19 off the game clock. Once again, the Eagles’ defense did not allow a touchdown, but Nugent converted a 47-yard field goal to give Dallas a 9-7 lead.

To begin the third quarter, the Eagles got the ball and made a concerted effort to lean on the running game. Running back Jay Ajayi started off the drive with two tough runs, putting the Eagles in a manageable third-down situation.

On third and one, Wentz bootlegged to right and found tight end Brent Celek for a 28-yard pitch and catch, giving the Eagles another first down. Later in the drive, Wentz stood tall in the pocket and delivered a strike to wide receiver Alshon Jeffery on third down, putting the offense in the red zone.

In the red zone, the Eagles called consecutive running plays for Corey Clement, who ran for 11 yards through the middle of the Cowboys’ defense for a touchdown.

After scoring the touchdown, Philadelphia decided to go for a two-point concussion as kicker Jake Elliott left the game with a concussion. The Eagles completed the two-point conversation thanks to Clement, retaking the lead 15-9.

On their first possession of the second half, Dallas could not put together a sustainable drive and was forced to punt. The Eagles, however, on their second drive, smelled blood in the water and attacked.

With 7:27 left on the clock, Ajayi ripped off a 71-yard run, putting the Eagles back in the red zone. Once inside the red zone, Wentz hit wide Torrey Smith for an 11-yard touchdown reception to increase the Eagles’ lead to 23-9.

In the fourth quarter, the Eagles continued to impose their will on the Cowboys, as they drove 85 yards down the field, which was capped off by a 17-yard touchdown reception by Jeffery.

A couple of minutes later, the Eagles’ defense forced Prescott into his third turnover of the game as Barnett strip-sacked the quarterback and linebacker Nigel Bradham recovered the fumble for a touchdown, putting them up 37-9.

Finally, the Eagles’ defense was able to get one more turnover off Prescott as he was intercepted by safety Malcolm Jenkins.

Next Sunday, the Eagles will take their eight-game winning streak back to Lincoln Financial Field as they host the Chicago Bears. Kickoff is scheduled for 1 p.m.