Will Doug McDermott Step Up For the Knicks? 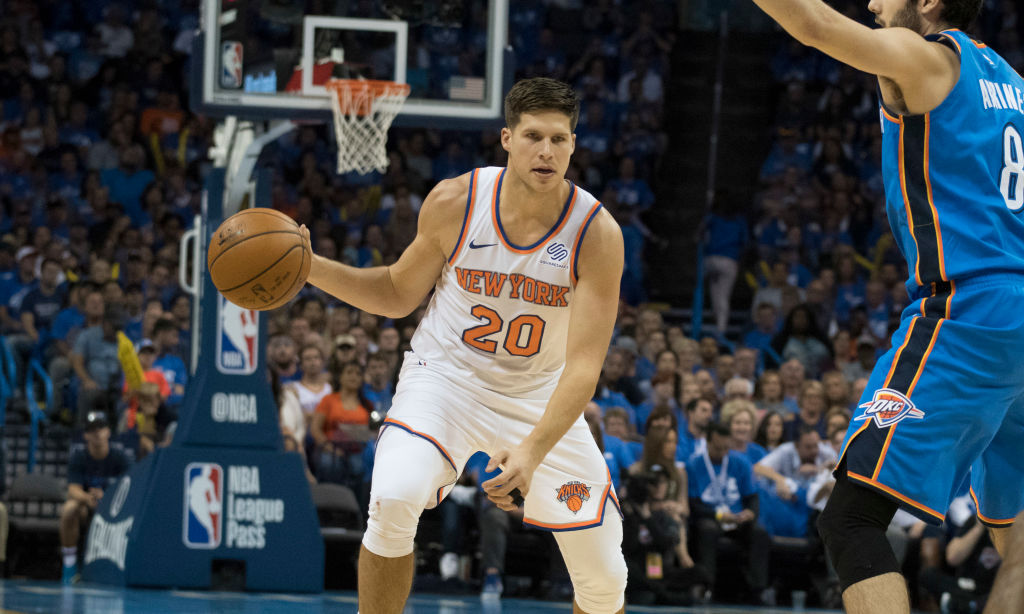 Will Doug McDermott Step Up For the Knicks?

With Tim Hardaway listed as “questionable” for Monday’s game against the Clippers and the Knicks unable to guarantee his quick return, the team will need to make some adjustments. With the 25 year old still experiencing soreness in the bottom of his foot, New York will undoubtedly miss his versatile efforts. Hardaway Jr. has been a steady secondary scoring option behind Kristaps Porzingis’ 27.8 points per game. Upon re-acquiring him, the Knicks were confident he could rise up and serve in such a capacity. What’s come as an added bonus, however, has been the swingman’s versatility. Hardaway Jr. has done a good job of helping the team push the pace, distribute the ball, and his defense has even improved a bit as well.

Should their starting small forward indeed miss Monday’s contest (and potentially beyond), Jeff Hornacek and Co. will be tasked with accounting for his missing production. They have a number of options.

Because Courtney Lee and Hardaway Jr. are seemingly interchangeable at the two and three, the Knicks have flexibility. The most sensible possibility would be to promote Doug McDermott to the starting five. Commonly nicknamed ‘Dougie McBuckets,’ the sharpshooter can do just that: he has the ability to pour in the points and score with ease. McDermott would help spread the floor and create more space for Porzingis. It’s been refreshing to see Hardaway Jr. be so aggressive and attack the basket early and often when looking for his own offense. At a time like this, it would be helpful if New York still had the recently waived Mindaugas Kuzminskas (and his excellent slashing ability) on the roster. Nevertheless, the 6’8″ McDermott may be the next best thing. There’s no denying he’s comfortable beyond the arc. He, however, has surprised opposing defenses this season by occasionally putting the ball on the floor and driving to the hole. Should he get the starting nod, the Knicks will need even more of that from him to mix things up.

McDermott is averaging 7.9 points on a shooting clip of 48/41/90 this season. With five double-digit scoring outings in 15 appearances, he has the potential to serve as a clutch performer. Having said that, sometimes coaches are weary of disrupting their rotation. Promoting McDermott could create another void on the bench. After scoring 10 points in Friday night’s loss to the Raptors, Michael Beasley proved he’s staying ready for any opportunity for increased playing time. If Coach Hornacek still prefers to keep McDermott on the bench, he could alternatively turn to a couple of his team’s youngsters.

Slotting someone who hasn’t broken into the rotation just yet in the starting five is a practice often used by coaches who are mindful of not shaking things up for their team’s reserves. Rookie Damyean Dotson has been praised by the coaching staff thus far for having NBA-ready defensive abilities, despite being a second round pick in this past summer’s draft. He’s shown potential in limited minutes on the offensive end, and recently scored 23 points while on G League assignment with the Westchester Knicks on Sunday. Ron Baker has struggled to break into the rotation this season after battling off an injury, but he did start thirteen games last season and clearly holds high favor with Hornacek and Co.

Ironically enough, a backcourt featuring Jarrett Jack and Baker/Dotson may in fact be too defensive minded. The Knicks will be looking for a spark as they attempt to make up for Hardaway Jr.’s 17.5 points per game. A committee of McDermott, Beasley, and Lee (who has averaged 13.8 points in last his five games) will be expected to score the ball a bit more during Hardaway Jr.’s absence.

Given the many options, perhaps Hornacek will look to roll the dice with different lineups, based on the opposing matchup, on a nightly basis. Should Hardaway Jr. sit out against the Clippers, McDermott should get the first call.