Season Over for the Dogs of the Desert: Indians Prospect Wrap 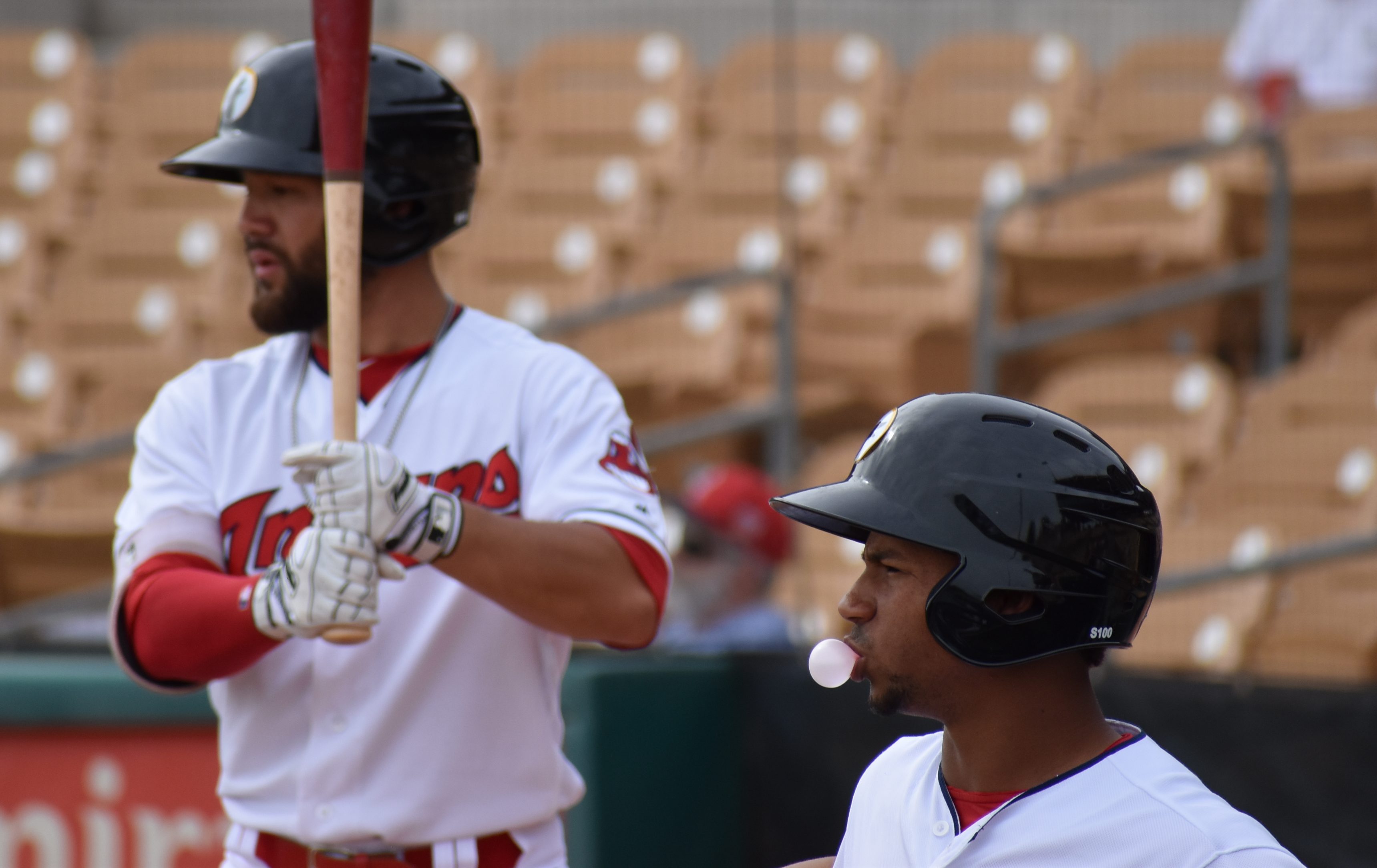 Season Over for the Dogs of the Desert: Indians Prospect Wrap

With the Peoria Javelinas taking the Arizona Fall League championship on Saturday against the Mesa Solar Sox, the 2017 AFL season has come to an end. For the first time in three years, the Indians affiliate did not represent the league in the championship game as the Glendale Desert Dogs as they finished two games out in the West.

While Braves top prospect Ronald Acuna took home MVP honors, the Indians Francisco Mejia had a strong case as well. He hit safely in 14 of his 15 games played and was used exclusively as either the DH or third baseman, never at his normal position of catcher. Throughout the year, Mejia hit .365/.397/.476 getting even hotter as the season ended with seven hits in his final five games (despite taking that one 0 for 4) without a strike out.

Mejia waits at third during an AFL game late in the 2017 season. – Joseph Coblitz, BurningRiverBaseball

Defensively, Mejia still has work to do. Unfortunately, due to the unpredictable nature of baseball, Mejia didn’t get too many chances at third and when he did, he committed two errors. Both of these were in his first three games at the position however and he looked more comfortable as the season went on. At the moment, he wouldn’t be considered a Major League option at third base, but if he gets a full spring work load of ground balls, he could potentially be ready by the time the season opens.

Another Indian with a solid fall was Sean Brady, who was the only starting pitcher to continue play in Arizona this year. He made six starts and posted a 2.78 ERA with four of his seven earned runs coming in one rough start of 2.2 innings. Overall, his strike out numbers were unimpressive, but he was very successful at keeping the ball on the ground, something that had a tendency to hurt him in the AFL, but would be a great advantage in front of the current Major League Indians infield and should be in Akron next year. Most importantly, his command was good despite missing a large chunk of the 2017 regular season with injury.

While he started the season slowly, Ka’ai Tom ended on fire with a five game hitting streak that included four multi-hit games. In just 11 games, Tom took 10 walks, leading to a .425 season OBP while striking out just 14 times. If there was a negative to Tom’s season, it was that he should probably never play center field again. He simply doesn’t have the height or speed for the position, but looked fine in left when given the opportunity.

Bradley sits in the dugout with his Desert Dogs teammates during the 2017 AFL. – Joseph Coblitz, BurningRiverBaseball

On the topic of walks, Bobby Bradley finally took one in his second to last game of the season, then took another in his final game to give him two on the season compared to 19 strike outs in 43 at bats. After it appeared that Bradley really had a breakthrough playing with Akron after a historically rough season in Lynchburg in 2016, this was a huge step back. Swinging at nearly everything thrown his direction, Bradley hit just .230/.260/.365 with a 4 for 34 to end the season (16 K’s). For a positive note, Bradley showed extreme athleticism and flexibility playing first base this fall and should be considered an elite defender at the position. In addition, he continued to flaunt his prodigious power, even if it didn’t amass into a large amount of home runs. Whether on foul balls or deep fly outs, the power is definitely there and if he can become more selective in the pitches he swings out, we may see the results that match his potential.

The rest of the Indians AFL participants didn’t fare as well as Tom, Mejia, Brady and Bradley. Tyler Krieger was an odd selection from the start as he played the entire 2017 season in addition to the World Baseball Classic and already hit AA despite being drafted in 2015. He should get some very well deserved time off now before he needs to be back in Arizona in March. Analyzing Krieger off his fall performance would be incredibly unfair as he didn’t look anything like the player who I’ve seen in the past, including his time with team Israel on an international stage.

Angulo throws in relief for the Glendale Desert Dogs in the 2017 AFL. – Joseph Coblitz, BurningRiverBaseball

At the same time, it’s hard to judge any of the Indians relievers, who combined for just 24.1 innings. Argenis Angulo was good enough to make the Fall Stars team, but struggled in that game as well as two others in his final four appearances, completely ruining his season stats. His biggest problem through eight innings was his walk rate, possibly the only thing keeping Angulo from being Major League relief option as early as 2018.

Possibly a victim of small sample size as well, this was the first time I’ve been able to see Leandro Linares in person since 2014 and he seemed nothing like advertised. Expecting a pitcher with a K/9 of 10 in Akron and a career rate of 8.9, he struck out just two in seven innings. Overall, he pounded the strike zone, but didn’t miss many bats or have overwhelming stuff. Linares has long been considered one of the Indians top relief prospects and potentially an option to replace Cody Allen as closer after 2018 and seven innings can’t change that, but his fall was not confidence inducing.

Finally, Luke Eubank also saw limited action in relief while returning from injury. He missed most of 2017, but is well on his way back and should be able to at least return to Lynchburg to start 2018 if not Akron.

While the primary focus of Burning River Baseball is always on the Indians, one of the most enjoyable parts of the Arizona Fall League is the fact that you can see so many great prospects from many teams in one place. Last year, then Boston now White Sox third baseman Yoan Moncada really stuck out as a breakthrough star. This year, the Braves Acuna was tremendous on a similar level. Of the Desert Dogs, both primary catchers had great years, but the Dodgers Will Smith really made an impression. He has impressive power and was second on the team to Matt Beaty (also with LA) with seven extra base hits.

Based on personal observances, the best pitcher was a member of the Pirates, but it wasn’t the expected Mitch Keller. J.T. Brubaker struck out 16 to just two walks in 13.2 relief innings and didn’t give up a run in his final three appearances, spanning 5.1 innings (9 K’s, 0 BB,  5 H). Between Keller, Brubaker and Taylor Hearn, the Pirates had three of the Dogs top five pitchers (including Sean Brady of the Indians and Andrew Sopko of LA) and that should bode well for the Major League franchise in the near future.