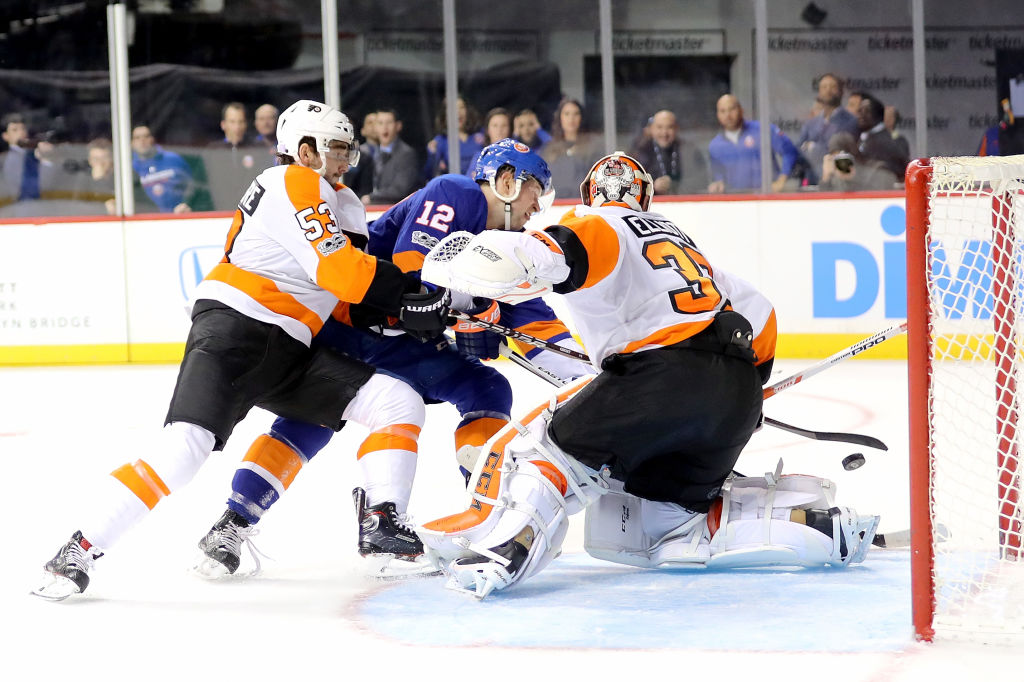 NEW YORK — It took 32 seconds into overtime for the New York Islanders to keep their unbeaten-in-regulation streak on home ice going, as they held off the Philadelphia Flyers 4-3.

One unbelievable display of finesse, skill and determination from Captain John Tavares to send a cross-ice pass to the waiting stick of Josh Bailey was the difference maker. Bailey finished off his own rebound for his third point of the night and eighth in five contests.

The Islanders were the better 5-on-5 team despite trailing twice: 1-0 and 2-1. New York has 11 wins in the last 15 games, a 7-0-2 record at the Barclays Center and sit alone in third place in the Metropolitan Division – a place where many teams desire to be by Thanksgiving.

Though the teams traded chances throughout the first period, Taylor Leier scored his first of the season, his first marker since December of 2016, to put the Flyers up 1-0.

After Shayne Gostisbehere committed a head-scratching tripping penalty late in the opening frame, Mat Barzal trusted his own wrist shot to snap one past Brian Elliot (stopped 35 of 39) for his fifth on the campaign to tie things up, 1-1.

Philadelphia came out fast in the second period and grabbed a 2-1 lead due to Michael Raffl’s first of the season at 46 seconds. But the Islanders, like they have done all season on home ice, refused to quit. An established forecheck pressured the Flyers into taking more penalties resulting in another power play goal – a rocket from Johnny Boychuk.

Josh Ho-Sang and Jakub Voracek would finish the second period with tallies for their respective teams and after a scoreless third, overtime commenced.

1. The legend of Mathew Barzal continues to grow. At this point, it would be a shock for the forward to not be in the running for the Calder trophy. You notice each time when the Barzal -Andrew Ladd-Jordan Eberle line is on the ice. The speed, skill and youthful confidence from Barzal are a perfect combination with the steady veteran in Ladd and dynamic playmaker Eberle. Aside from the Islanders top line of Anders Lee, John Tavares and Josh Bailey, this line does more than score.

2. Speaking of Barzal, he is getting more ice time and power play time as the games go on, and Wednesday night was no different. Special teams played another important role in the latest Islanders victory. While the Flyers went 1-for-2 with the man advantage, New York scored twice in five chances and that proved to be the difference maker.

“Special teams were huge,” Barzal said after the win. “It’s a heck of a penalty kill, and a lot of guys that like to battle. They did a great job against a pretty lethal power play, especially late in the game. Our power play did pretty well.”

3. The youth movement is real. Trust the process, right? In Wednesday night’s starting lineup, seven forwards were former first round draft choices by the Islanders. One young former first rounder, Josh Ho-Sang, showed flashes of returning back to normal as he finished with a goal, saw 13:54 in total ice time and also saw some action on the power play. It’s been a challenge for him – the 21-year-old has bounced in and out of the lineup as well as spent time in Bridgeport. If the Islanders could get him going, their depth will clearly be more effective.

4. Another former first rounder, who has received a ton of backlash over the course of his career, had another impressive night on the ice on Wednesday, capping it off with the game winner in overtime. Josh Bailey is putting up elite numbers. Forget about disparaging him, Bailey is a highly effective forward with the scoring touch. As of Thanksgiving Day, Bailey is ranked eighth in points around the league. He is up with Steven Stamkos, Connor McDavid, Jakub Voracek – the list goes on and on of elite status. Maybe it’s time to anoint the man who has 26 points in 21 games this season as an elite playmaker.

5. Did Fort Neverlose move to Brooklyn? The Islanders are 7-0-2 at home this year and have scored 41 goals in those nine contests. The players are feeding off the crowd’s energy and have made history, matching their best start in their history (seven wins, two ties in 1978-79; eight wins in 1984-85): 16 points through nine home games.

“We just like to play here,” Barzal said. “We’re not out of any game. We think we can beat anybody in this league. I just think we’re all really comfortable at the Barclays.”

6. Anthony Beauvillier easily had one of his better games of the season on Wednesday. Though he only played 10 minutes, Beau was a catalyst in the corners and grinded out every shift. There were several instances during the first and second periods where the Brock Nelson-Beauvillier-Ho-Sang line got caught on the ice after failed opportunities to clear but the unit, Beauvillier in particular, stayed strong and added a blocked shot to his resume.

7. Finally, make sure you refresh your memory about the interesting statistic that showcases a wild trend that has taken the NHL by storm for the last decade. Over 77 percent of teams who are in playoff positioning by Thanksgiving will be playing postseason hockey come springtime. New York currently sits alone in third place in a highly competitive Metropolitan Division. Of course, that could all change in one week’s time. In fact, do not be surprised if more standings changes occur, especially with just five points separating eighth place from third place in the division. Also worth noting, the Islanders are much better than last year’s group when they were 7-10-4 at this time.