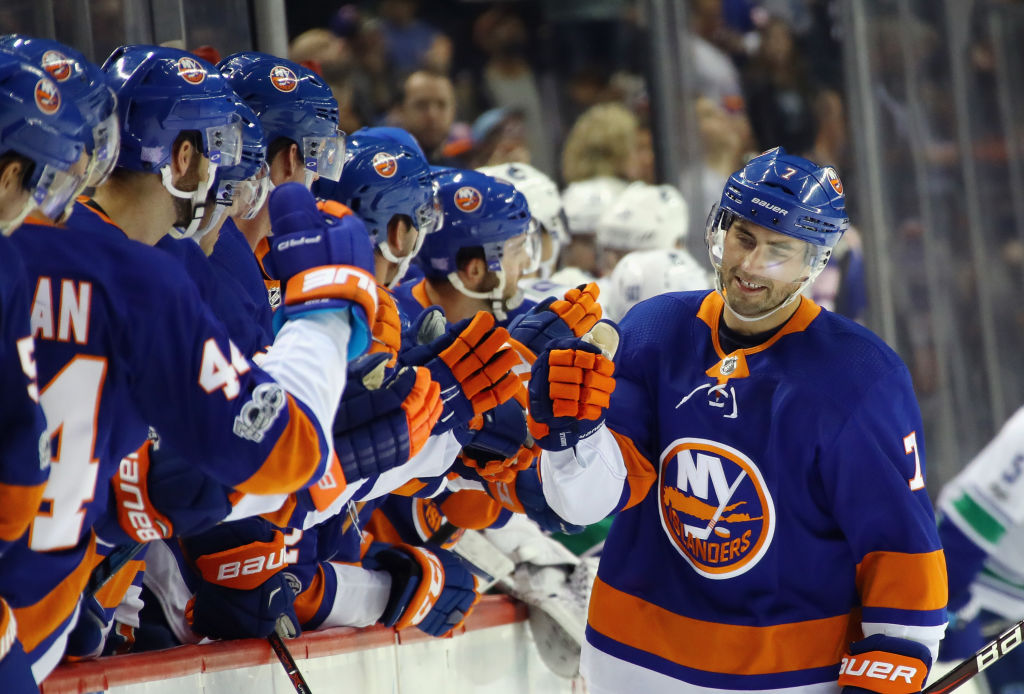 NEW YORK — The Islanders picked up their fourth consecutive win on Tuesday night with a 5-2 win over the Vancouver Canucks. John Tavares (one goal, one assist), Anders Lee (one goal, one assist) and Adam Pelech (two assists) each recorded two point games in the win, with Jordan Eberle, Andrew Ladd and Calvin de Haan also contributing.

The win helped the Islanders close out the month of November with an 8-3-1 record and improved their home record to 8-0-2 this season.

The Islanders were quick to score first with Andrew Ladd scoring 5:26 into the first period on a shorthanded breakaway. The Canucks coughed up the puck off the offensive zone draw and the Islanders quickly moved the puck to Ladd, who fired the puck past the glove of Anders Nilsson.

The lead was short-lived when just over a minute later the Canucks tied the game off a power play goal from Thomas Vanek. But New York was able to regain control of the game during a one minute span late in the period.

Calvin de Haan gave the Islanders back the lead with a shot from the point at 16:42 that beat Nilsson and Eberle scored at 17:42 to put the home side in front 3-1.

Anders Lee gave the Islanders a 4-1 lead less than five minutes into the third period, but Bo Horvat cut the lead back down to two with a goal at 6:33. John Tavares sealed the win with his 16th goal of the season at 13:35.

1. Secondary scoring continues to come for the Islanders, this time with five different players — defensemen and forwards — combining to score five goals in the team’s latest win. The Islanders have scored three or more goals 16 times through 24 games this season and hold a 14-2 record when they do so.

A big part of that secondary scoring has been the contributions from the Islanders’ second line of Andrew Ladd, Mathew Barzal and Jordan Eberle. All three had points in Tuesday’s win over the Canucks and have been major contributors so far this season. Eberle is third on the team in goals scored with 10, Ladd and Barzal’s six goals have them within the top five of goals scored and Barzal’s 18 assists are good for second on the team.

Outside of that, there are only four players — Alan Quine, Denis Seidenberg, Thomas Hickey and Jason Chimera — who haven’t scored a goal this season. And every skater on the Islanders active roster has at least two or more points this season.

2. “When you got that going it’s tough to beat that. When team’s really rely on one line to score other teams key on that and shut that down. Tonight our power play, which has been red-hot, didn’t really score for us, but we found goals from other lines.” — Jordan Eberle on secondary scoring

3. Eberle recorded his 400th NHL point, a feat that the Islanders’ forward wasn’t even aware of when asked about it after the game. The milestone came on the Islanders third goal of the night and his 10th goal of the season. It has been a major 180 for Eberle, who failed to score a goal through his first 10 games this year and now has 10 in his last 14 games.

If there were any questions about where Eberle’s confidence was, those have been pushed aside by his play on the ice. The former Oiler has found new life with the Islanders on a second line that has crucial to the team’s success. There has been a lot of talk about Eberle’s confidence and what occurred with it when he was in Edmonton since a story was published last Friday on Sportsnet.ca.

4. It’s hard to go a game without mentioning Mathew Barzal, and I won’t forget to mention the Islanders rookie phenom here. Barzal’s assist on Eberle’s first period goal extended Barzal’s point streak to a career high seven games. Barzal remains in control of the top spot for points amongst rookies with 24 points through 24 games. The player trailing him in that category, Canucks’ rookie Brock Boeser, was held without a point on Tuesday.

5. For the second straight start Jaroslav Halak held an opponent to two goals or less and had a save percentage above .900. Halak put up his best performance of the year so far in the Islanders 2-1 win over Ottawa on Saturday and followed it up with an equally strong effort on Tuesday against Vancouver. The 32-year-old netminder made 23 saves on 25 shots, which included an impressive glove save on Michael Del Zotto in the third period.

“I just tried to battle and that’s what happened tonight. I think we played really good tonight,” Halak said.

6. “I think Jaro had a really great effort against Ottawa. I thought he wasn’t tested a lot tonight, but he made some big saves. Prime example in the third period. That can change the game. That’s a 4-3 shot. 12 minutes left, 13 minutes left, whatever it was. We fell a little asleep on the boards and point-blank he robbed him. I think those were those timely saves. A week ago we were talking about Thomas. Their numbers aren’t where they want to be, but they’re battling making the big saves at the key times. Jaro has done that the last two games.” — Doug Weight on Halak’s performance