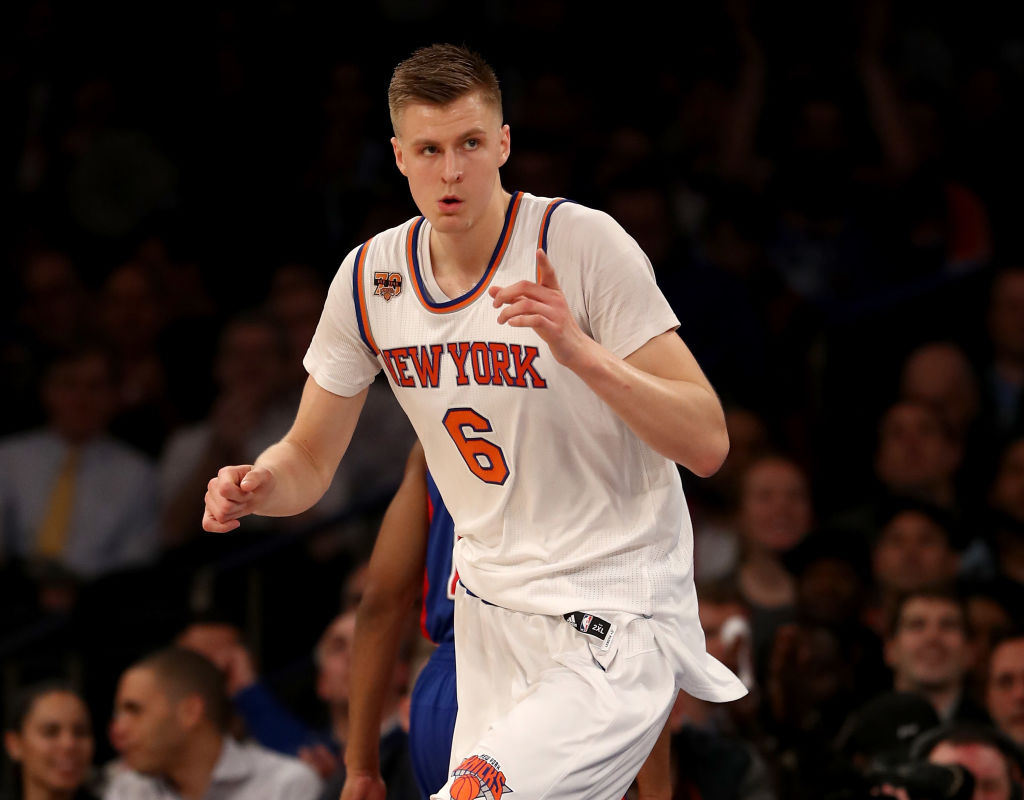 On Wednesday night, Madison Square Garden was filled with a contrast of cheers and jeers, ooh’s and ahh’s, and a loud collective gasp as the home crowd held its breath in horror and concern.

By game’s end, the Knicks had come away with a commanding 115-86 victory over the Heat. The contest itself was never in doubt. Instead, a cloud of worry loomed over The World’s Most Famous Arena not even four minutes into the game.

New York was already off and running when Kristaps Porzingis found himself on the other end of a hard shove from Miami’s Justise Winslow. The Knicks’ rising star’s ankle appeared to turn completely, and Winslow subsequently stepped on it very hard. Porzingis went down, wincing in pain, and had to be helped by Willy Hernangomez and members of the team’s training staff to the locker room.

Porzingis did not return. With a potentially prolonged absence, all the promise and already evident progress the Knicks have made thus far came to a halting pause. Should Porzingis have to miss time, New York would be in serious trouble.

But alas, this does not appear to be the case after all. Though Porzingis didn’t step back onto the hardwood, it was more because the Knicks didn’t need him and less that he wasn’t able to. Despite the ankle sprain, X-Rays were negative and Porzingis could have played through the pain. Instead, he’ll monitor the injury and potentially have an MRI, but isn’t expected to miss time, according to ESPN’s Ian Begley.

No Porzingis, coincidentally enough, proved to be no problem for the Knicks. Enes Kanter returned from a three game injury absence of his own and stood tall as the contest’s star in his teammate’s absence. Kanter was the best player on the court by a landslide. Tallying game-highs across the board, the big man added 22 points (on 7 of 9 from the field and 8 of 9 from the charity stripe) and 14 boards (six offensive). Without defensive phenom Hassan Whiteside (out with a knee injury), Miami’s front court struggled to contest Kanter offensively and had even more difficulty contending with him on the glass.

The Heat looked lost without its leader and defensive anchor, and the Knicks took full advantage. While still concerned about Porzingis, his teammates had a job to do. Watching Kanter fight tooth and nail on both ends, displaying that fight (pun intended) and determination, clearly motivated those around him to play with an upbeat level of energy. Putting together a more balanced effort, seven other scorers followed Kanter’s example and logged 8 points or more. Three additional players grabbed 7 or more rebounds. Jarrett Jack and Ramon Sessions combined for 13 of the Knicks’ 26 assists. Kyle O’Quinn, Doug McDermott, and Michael Beasley combined to shoot 62% while filling in Porzingis’ minutes. Lance Thomas found his way to the charity stripe aggressively, converting on 5 of 6. Needless to say, everyone played their respective roles perfectly.

As New York has experienced many times before themselves, having an opponent find its rhythm and stampede all over your defense can be very demoralizing rather quickly. Miami found themselves on that end of the spectrum. New York had things flowing, the Heat’s defense was no match, and in turn, they were out of sorts offensively throughout.

Porzingis may be the rising star in the Big Apple, but Kanter is quickly emerging as this team’s heart and soul. His return sparked an impressive performance all around.