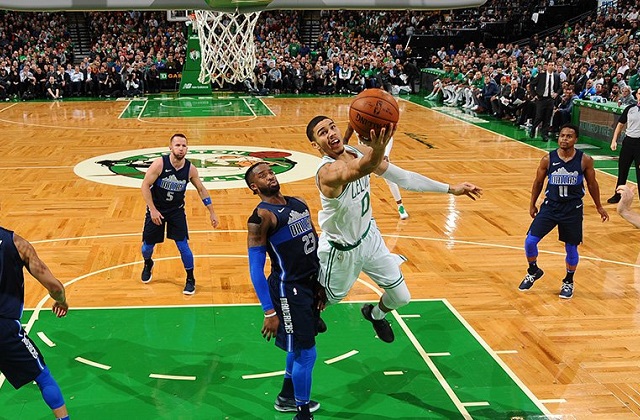 Shorthanded, down by double digits, shooting only 41% – none of that matters to these Celtics. They find a way to win, and they did it again tonight. Boston topped the visiting Dallas Mavericks, 97-90, behind five scorers in double figures, a stingy second-half defense, and one of the season’s best showings by the second unit.

The win upped the Celts’ record to 22-4 and closed out this season’s longest home stand with a 4-1 mark. Boston is now also 8-0 versus the West.

The Celtics were without Marcus Morris, who was resting his persistently sore knee, and Jaylen Brown, a late scratch with an inflamed eye (contact-lens related). Marcus Smart started in Jaylen’s place.

Dennis Smith, Jr., who was held in check when the Cs played in Dallas two weeks ago, seemed determined to make up for that early – he attacked the basket to quickly score four points as the Mavs made three straight layups. Brad Stevens didn’t like it and called a timeout after less than two minutes. The Celts responded with seven straight points while blocking Smith on a layup (Kyrie Irving) and a triple (Al Horford).

The quarter was “highlighted” by Smith getting testy after a foul by Kyrie. After a video review, the cop-out double technical was called. On the next Celts’ possession, Wes Matthews was T’d up for crying after committing a clear foul on Jayson Tatum’s drive. We also saw a matchup of mighty mites J.J. Barea and Shane Larkin (seeing his first minutes in a while due to the shorthanded bench).

The quarter ended with Dallas ahead, 26-24. Smith had seven for the Mavs, while Kyrie led Boston with eight. Horford had 5/4/3 and Tatum added five points and six boards.

The second quarter began with a previously unseen lineup of Daniel Theis, Shane Larkin, Terry Rozier, Marcus Smart and Guerschon Yabusele. Then Smart was replaced by Abdel Nader. (You can’t tell the players without a scorecard!) Incredibly, this unit stayed within 37-36 on three-point buckets by Larkin (twice), Yabu and Nader. It was still a one-point game until Dallas responded from the arc, nailing four triples to extend to a 53-44 lead. Maximilian Kleber impressively rejected both Horford and Theis at the rim on the same possession, which helped the Mavs close the half with a 57-47 advantage. Irving and Smith were the respective leading scorers with 12 apiece.

After allowing the first bucket of the second half, the Cs exploded for eight straight in 57 seconds: triples by Tatum and Horford, plus a gorgeous fast-break lob pass from Smart for a Horford jam. After a Mavs timeout, Tatum stole Matthews’ dribble and got away for another dunk. A Kyrie layup made it 12 in a row and a tie at 59. Dallas finally scored, but Al drained a corner three to give the Cs a 62-61 lead.

The teams traded two-pointers for the next four minutes until a Kleber dunk gave Dallas a 71-68 lead. The Celts missed their last five shots of the quarter, getting only two free throws by Terry Rozier. Dallas led at the horn, 73-70. Horford and Harrison Barnes each scored 10 in the period.

The Cs finally took some control by opening the fourth with a 10-0 run. Larkin and Theis imitated Smart-Horford with a lob pass for a slam; Rozier drained two FTs; Larkin swished a second-chance triple; and Rozier dropped another trey in transition. 80-73, Boston.

But Dirk Nowiztki’s two at the line broke the streak, and after a Theis free throw, Dirk and Barea both nailed threes to tie it at 81. The Cs answered with a Theis putback dunk and a Kyrie runner. With Boston’s lead at two, Kyrie spun home a coast-to-coast layup, then hit a runner with an and-one, 92-85 with three minutes left. Horford swallowed up Smith’s drive to the hoop, forcing a turnover.

Next possession, the Cs ran the time down and Kyrie delivered with a banked floater at the shot clock buzzer. When Kyrie stole a pass and Rozier slammed it home on the break, the Cs led 97-87. Over the final 4:31, the Mavs scored just two points until a meaningless three at the buzzer by Matthews.

Dallas had 57 points at halftime, but scored only 33 in the second half. Per @celtics_stats on Twitter, it’s the NBA-best 16th time this season that the Celtics have held their opponent under 100.

Lock-down defense leads to the easy alley-oop on the other end! https://t.co/od9lDzW0M5

Tatum can do it all! https://t.co/S8kwGxOfaJ

Tweets of the Night

Of all the ridiculous numbers, this might top the list right now…the Celtics are now 7-3 this year…when TRAILING by double-digits. pic.twitter.com/aJvDRCoT35 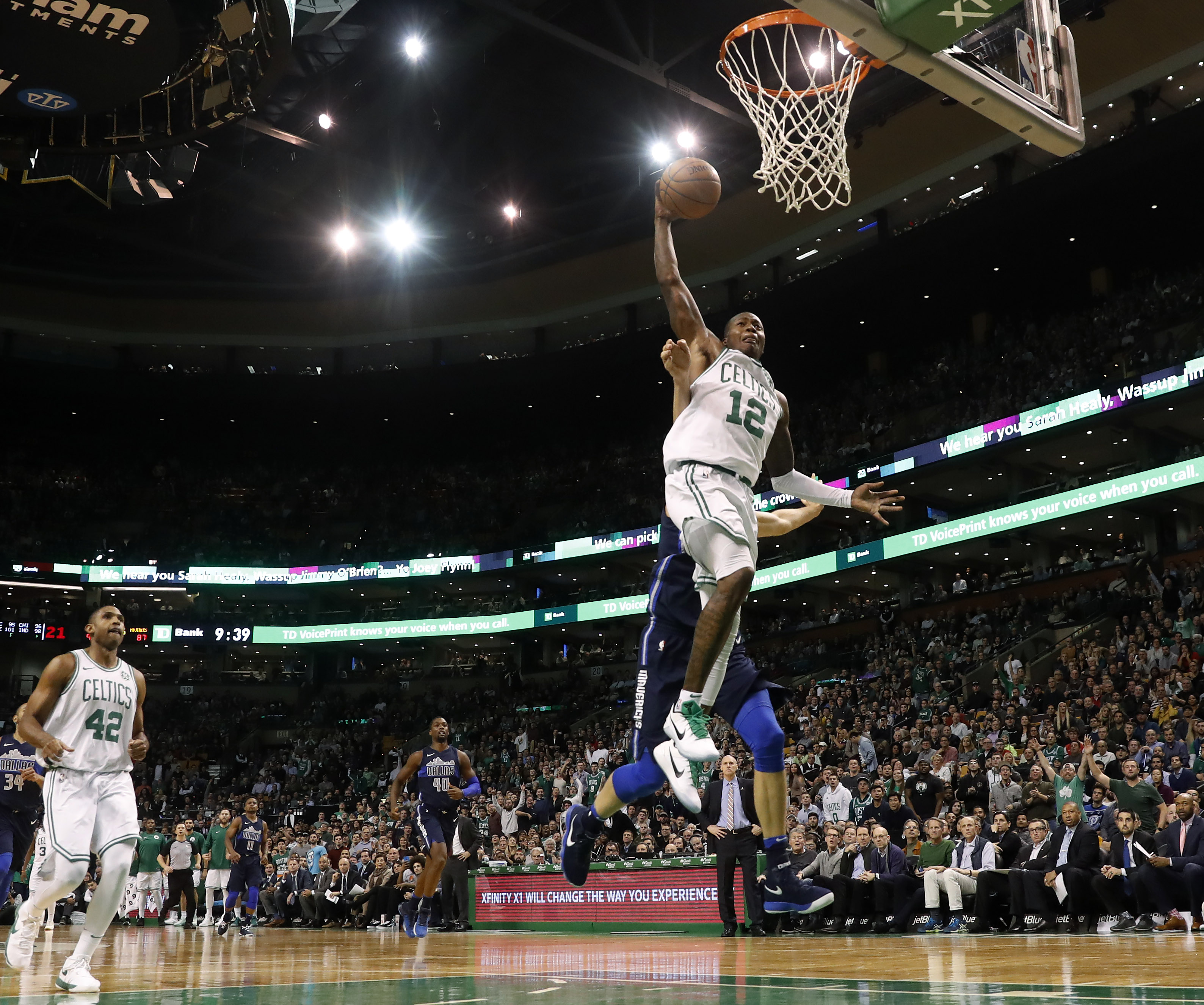 A testy game to begin with, the Dallas Mavericks were in position to throw off the best NBA team by record. A late push by...