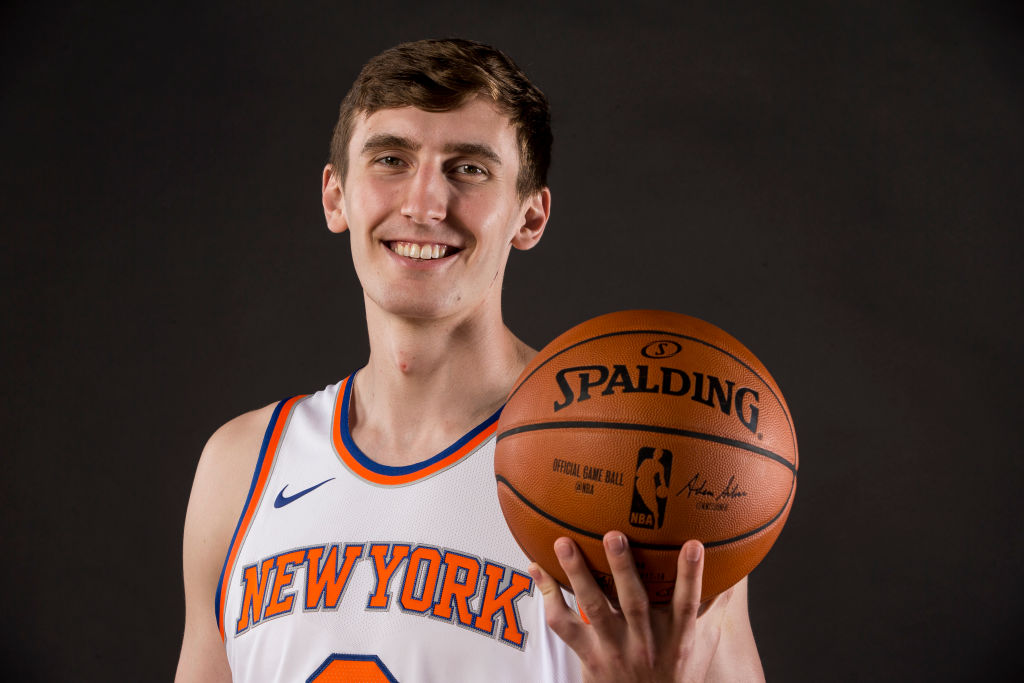 With introduction of two-way contracts, Luke Kornet became the New York Knicks’ first signee. Throughout the 2017-18 season, KnicksJournal.com will follow the big man’s journey through his rookie season.

June 22, 2017 marked the start of a new journey for Luke Kornet. At his parent’s house in Kentucky, Luke took in the NBA Draft with his family. While he wasn’t amongst the 60 players drafted, there were teams lining up for him. Several teams called and the New York Knicks added a new tidbit to their offer.

“It was a great night,” Kornet told KnicksJournal.com. “Within an hour after the draft, we were getting calls from teams, including the Knicks, and they offered the two-way. It was pretty much within an hour from the end of the draft. It was a determined thing and we agreed upon it. It’s kind of a weird thing, because no one had really done it before and they’re all new this year, so it’s cool being one of the first ones to be in this position. I’m really happy with where I am with the Knicks”

Before the start of the season, the prospect had an opportunity to soak in some of New York’s finest attractions. Luke hasn’t spent much time on the east coast since becoming a young man. He grew up in Kentucky, went to high school in Texas, and spent his collegiate career in Tennessee at Vanderbilt.

Whether it was attending a local New York sporting event, going to a Broadway play or enjoying the sights of the Statue of Liberty, the offseason proved to be an eventful one for the Dub Knicks’ center.

“Even in the past week, I was able to go visit some of my colleges coaches because they were playing at down at Barclays [Center],” Kornet said. “I feel like there are so many things like that going on where everyone comes through New York at some point in the year, which is a really awesome thing.”

Kornet continued: “I love it up here in Westchester and White Plains. It’s a little bit further away from the city, which is nice and more comfortable. But then you also have everyone come to the city and all the events in the city, which has been great. Now the season is going on, there’s a little bit less of that. It still gives [me] some great opportunities throughout the year.”

“I’ve kind of been through the whole tourist area,” the 22 year old stated. “I’ve actually been able to go down to Wall Street to visit some people working down there. We got to take a ferry before the season started and saw the Statue of Liberty. Being on a boat was a different experience. [I’ve] been able to go to Broadway a little bit. I took some musical theater classes in college and I actually kind of like it a lot. So to be able to go to that, it’s something that I really appreciate.”

With Kornet on a two-way deal, he spent NBA training camp with the big league club. Despite not playing in a preseason game due to injury, the matchups he had in practices were valuable. Each front court player had their own skill set.

“It’s a whole other level,” Kornet stated. “In college, you’re playing guys, that usually — teams have like one or two guys that are really capable players, but then we’re playing all these bigs who are so capable and really have their own strengths in different areas. Something I learned in camp was to just compete, and how much effort really separates players just terms of defense. I’m kind of finding that you just need to add [what you bring] to the table and then evolve the secondary characteristics to make you a better teammate and a more complimentary player.”

The Knicks’ front office showed an interest and increased dedication to Kornet from the start, which is something he appreciated a great deal.

“I think the Knicks were very committed to me,” Kornet said. “All the people I got to meet, like Allan [Houston], and then Steve Mills and Scott Perry. Everybody from top to bottom, I think is really committed to winning and doing it in a substantial way. Throughout all of training camp and now with Westchester, I love everybody that we’ve been working with. They’ve all been great people and really professional. I’m really glad to be in this organization.”

“I love it here,” he continued. “It’s a much different like feel than a lot of the other arenas, because most of them are just large places. I feel like this is a lot more intimate of an environment. I think it’s a much better experience for the fans because you feel so much closer to the game. This place is cool. It definitely has it’s charm and I like it. I’m used to playing at Vanderbilt. We had a different type of place and I think this place is similar in that aspect by having it’s own unique environment.”

Even though it’s still early in the season, the 7’1” center is focused on his development. Kornet has an opportunity to sharpen his skills against top competition in the G League while staying ready for when his number gets called by New York.

“The most important thing in terms of developing is just ball screen defense and a lot of defensive things,” he stated. “We’ve kind of reached the point where we all know our covers, but now it’s more about really establishing comfort with the guards and being able to add in like you can start feeling each other in terms of when you got to leave a ball screen and how you can play in certain things. I think that’s the biggest thing cause I’m comfortable offensively and I’m sure at the next level my role would be even more defined then I have a little bit more room to try new things here.

“But being a real focal point defensively in just terms of always talking and setting a precedent for our entire defense is something a big guy has to be able to do,” Kornet continued.

Through the first 12 games of the season, Kornet has played a significant role in the early success of the Westchester Knicks. He’s been a stretch five and has served as a steady shot blocker for the team. He is averaging 15.4 points, 5.9 rebounds and 1.4 blocks in 32.1 minutes per game.