Is Aaron Boone going to be Brian Cashman's puppet? 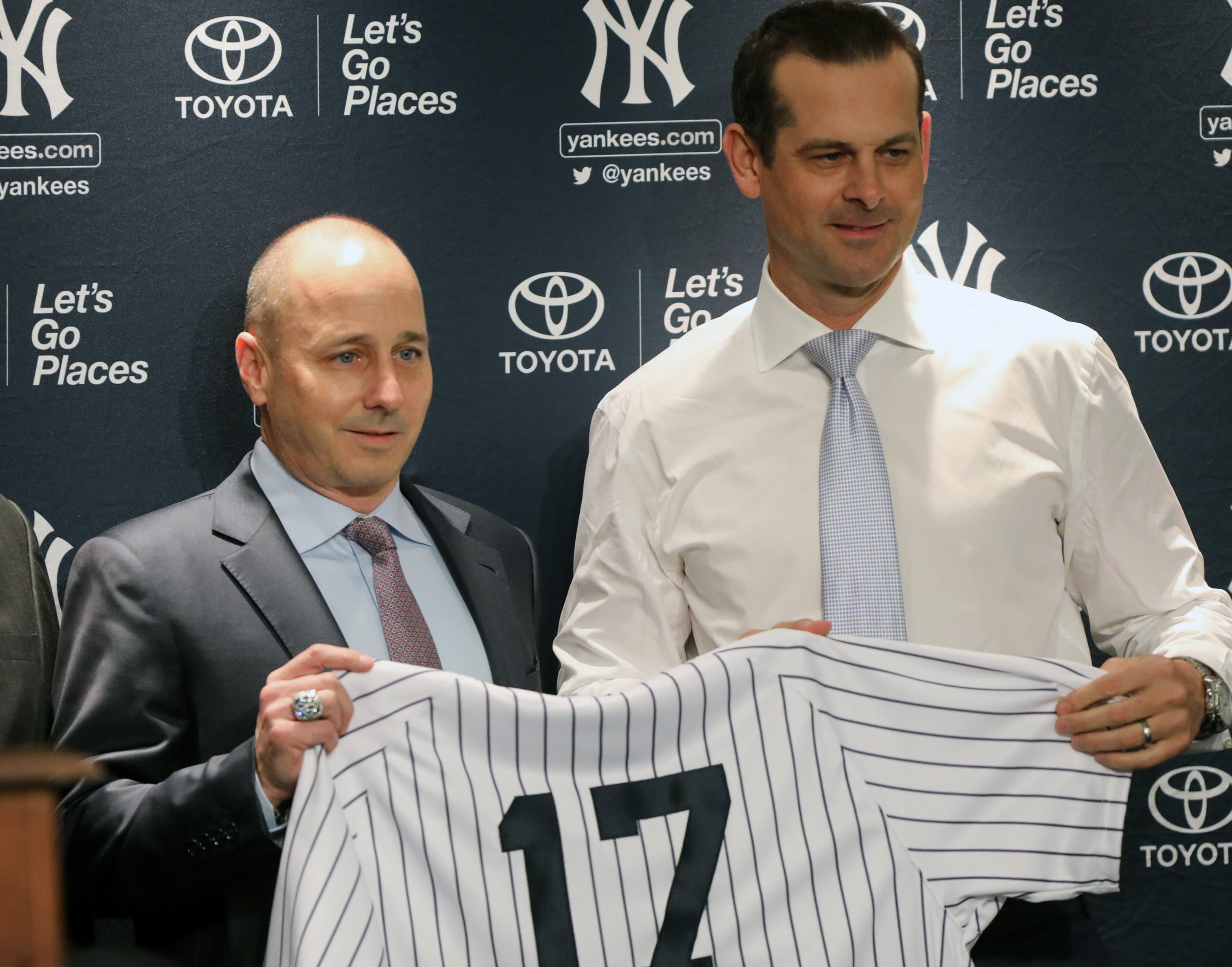 Is Aaron Boone going to be Brian Cashman's puppet?

The New York Yankees have hired Aaron Boone as their manager, and I’m not sure how I feel about that.

Way back in 2007, I was thrilled when Joe Girardi became the new Yankee manager. But I was fine with the Yankees’ decision to get rid of him this year. It was time. I think most managers have a shelf life of five years or less. Girardi had lasted a decade, despite just one ring, and it was time for a new voice.

One of the things that struck me as far as his relationship with the team was after he mismanaged Game 2 in the ALDS, he way-too-effusively praised Todd Frazier for saying “Let’s go,” at the end of the team meeting where Joe apologized for his errors. That just struck me as strange.

Then there was Aaron Judge’s amnesia with the media at the end of the series where he wouldn’t take the media bait about winning it for Joe. It just seemed like things weren’t what they appeared to be.

And finally, I was struck when after the season, Buster Olney of ESPN gave Girardi only a 50/50 chance of returning. What did Buster know that the NYC media didn’t? Or that they chose to ignore?

Someday, somebody will write a tell-all explaining the deterioration of Girardi’s relationship with the team, and with Yankee brass. But right now, we’re just on the outside looking in, wondering what went wrong. Where the heck were those so-called tough NYC reporters and columnists? Most of them missed the boat here.

But is Aaron Boone the best choice for the new Yankee manager? I confess to being underwhelmed by the choice, although I’m of course willing to give him a chance.

Let’s compare and contrast his broadcasting career with A-Rod’s. In just a year of being a baseball TV analyst, Alex Rodriguez has made such a huge impact that it has completely changed his image for the better. Now he’s dating J-Lo, is on the cover of Vanity Fair, and will even have his own reality show. I think he’ll end up in the MLB Hall of Fame, sooner rather than later. And much of it is because people have changed their opinions of him after hearing him talk so passionately on baseball.

On the other hand, Aaron Boone has in the broadcast booth for eight years. Can you remember one thing he said? Did you ever watch a game thinking, “I can’t wait to hear what Aaron Boone has to say?” Me neither.

And as I discussed with my fellow baseball blogger Sully Baseball, the fact Boone got this job in no small part because of his family pedigree and connections, without ever coaching one moment in the game, doesn’t sit well with me. Especially given how few opportunities African-Americans and Latinos are given when it comes to managing. Why do *they* have to pay their dues for decades, while Boone can just waltz into Yankee Stadium and get this position?

This is the marquee job in baseball, and they are entrusting it to a neophyte? Why? Coach M, my fellow Staten Island Running Club compadre, who got me through my first marathon, has more coaching experience than Boone does!

Yes, I know Boone hit the homer to win the ALCS in 2003 against the hated Red Sox. But picking him for that is like when the Yankee brass decided to have Bucky Dent throw out the first pitch in Game 7 of the 2004 ALCS. As if the Sox were going to melt over that. It just comes across as lame.

Three years ago, when Brian Cashman signed yet another contract to continue as Yankees general manager, I made the conscious choice to accept it and stop the constant Cashman bashing in this blog. Griping about him wasn’t good for my mental health. I took a step back, said the Serenity Prayer a lot, and started focusing on my own life. Since then, I’ve continued my weight loss and fitness journey and now run three marathons and completed two marathons. And I’ve never regretted my choice.

And Cashman did actually earn his money over the past few years as GM, making solid draft picks and trades, so there hasn’t been much to complain about recently anyway. At any rate, he is going to be GM for life unless he gets caught in some sordid scandal. And even then, I think he would survive it.

It’s pretty clear, though, that they want Boone to be their puppet, as is the current trend when it comes to baseball managers, who are like the anti-Belichicks. Front offices want managers to be their puppets — to play who they want them to play, and do things the way they want.

Maybe Boone will excel at dealing with the players. I watched the presser and thought he came across as a warm, friendly, personable guy. He certainly seemed to handle the media well.

So I wish Aaron Boone well and hope he does a terrific job as Yankee manager. But I confess to wondering if there was a better candidate out there somewhere.