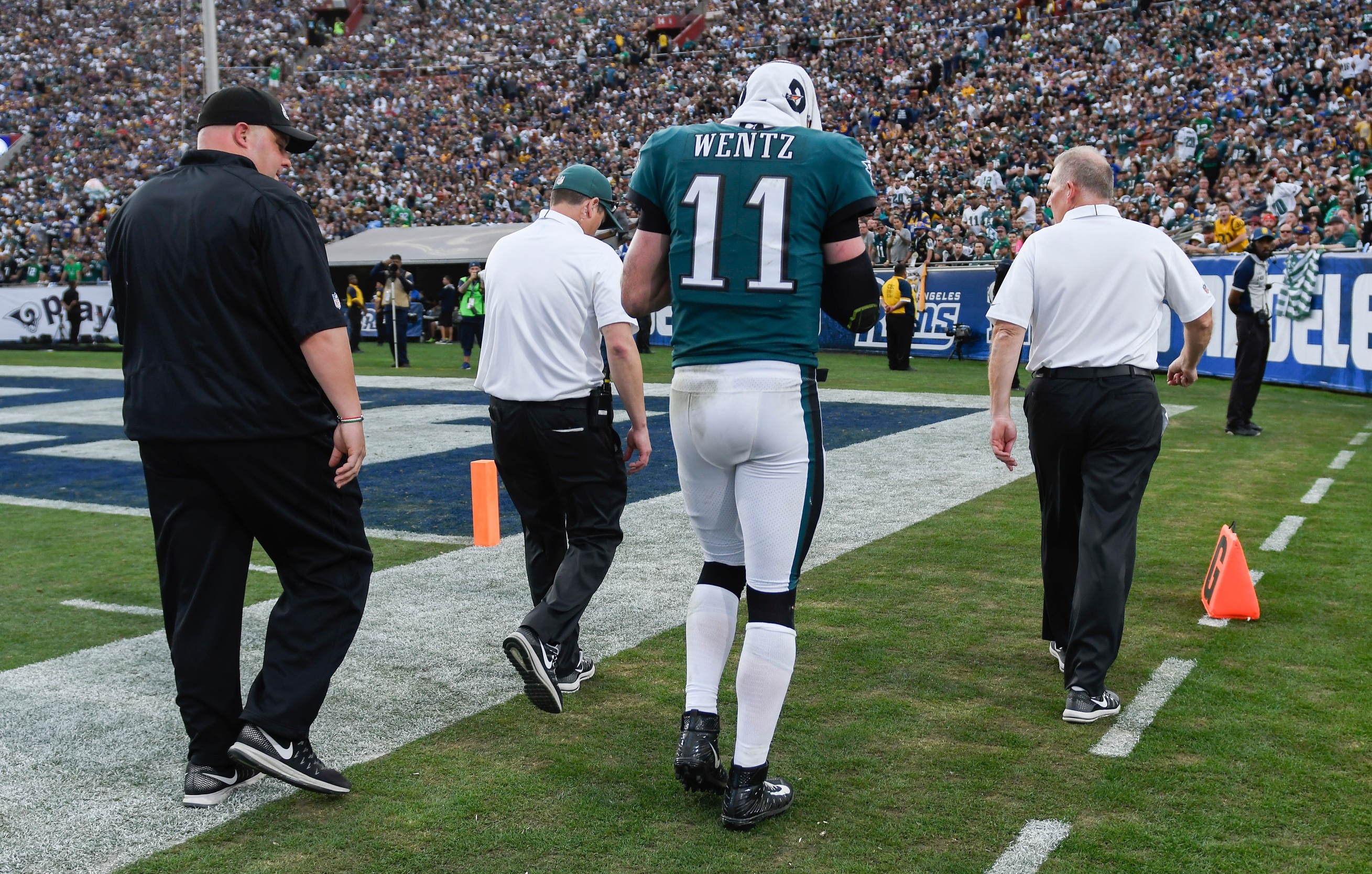 It was the first time that two teams averaging more than 30 points per game faced each other in December or January since 1970. Hailed as the game of the week as two of the top teams in the NFC face off, the anticipation was electrifying with the Eagles having a chance to clinch the NFC East with a victory.

However, in the third quarter, quarterback Carson Wentz was taken back to the locker room with a knee injury, which he suffered on a touchdown run that was called back because of a holding call against right tackle Lane Johnson. At this time, the injury is not confirmed. But speculations are reportedly either a torn MCL or an ACL, and Philadelphia fans everywhere are praying for the former. Hopes were high entering the game, only to have them possibly crushed in the third quarter.

On the Eagles’ opening drive, Wentz threw an interception intended for wide receiver Nelson Agholor, which positioned the Rams at the Eagles’ 37-yard line. Running back Todd Gurley added to his bounce-back year with a touchdown from the one-yard line following his run that set the Rams up in the red zone.

The Eagles then answered with a touchdown to tight end Brent Celek, after a pass interference in the end zone placed them at the one-yard line. It was Celek’s first touchdown since Thanksgiving 2015. Wentz found the end zone one more time in the opening quarter with a laser throw to third-string tight end Trey Burton in double coverage.

The second quarter opened with the continuation of the Eagles’ drive, where Wentz threw his third touchdown of the game and his second to Burton. Errant tackles by the Eagles’ defense would set the Rams up in the red zone on their next drive, where they scored their second touchdown making it a 21-14 score.

The offense sputtered on the next drive and punter Donnie Jones was sent out to punt the ball away, which resulted in a tense moment as it narrowly missed the arm of a Rams’ defender. Linebacker Nigel Bradham missed the second interception that Goff gifted to him and on the next play, Los Angeles was given a generous spot seemingly keeping their drive alive at the two-minute warning.

With the extra time, Eagles head coach Doug Pederson opted to throw the flag and challenge the spot of the ball, which was overturned, and the Rams were forced to punt it away. On the last drive of the first half, Wentz led the Eagles down the field, completing a pass to wide receiver Torrey Smith, who ran a pristine crossing route. The Eagles, however, were unable to find the end zone and had to settle for a Jake Elliott 22-yard field goal sending them to the locker room up 24-14.

In the opening minutes of the third quarter, the Rams scored back-to-back on their opening possession and from a blocked punt to take the lead 28-24. After scoring 14 unanswered points, Los Angeles had Philadelphia stopped, but an unsportsmanlike conduct penalty on Rams cornerback Trumaine Johnson gave the Eagles a first down and decent field position.

It was this drive that Eagles fans would like to have back. It was here that Wentz attempted to run into the end zone for a touchdown and got crunched in between two defenders; his knee withstanding the brunt of the impact. While it appeared that the Eagles would have to settle for another field goal, in a nod to his mentor, Pederson opted to go for it on fourth down and wide receiver Alshon Jeffery somehow trapped the ball against his leg to maintain control for a touchdown.

It was Wentz’s 33rd touchdown on the season passing Sonny Jurgensen for the franchise record for the most touchdowns in a single season; a record that has stood since 1961.

The fourth quarter was a nail-biter as backup quarterback Nick Foles stepped in to take over for the injured Wentz. While the Eagles tried to depend on their run game with Foles under center, it was a pass to Agholor on third down that kept the drive alive. After Jake Elliott made a 54-yard field goal, the Eagles were gifted another first down on a personal foul call.

Elliott ended up coming back on the field, any way to hit a more modest 33-yard kick putting the Eagles up 37-35. Nevertheless, the Rams got the ball with one second left, and to add insult to injury, as they were tossing laterals trying to keep the game alive defensive end Brandon Graham stepped in with an interception and trotted into the end zone to end the game with a final score of 43-35.

The Eagles clinched the NFC East with the victory and are now in sole possession of the number one seed in the NFC. However, the future is now clouded with the uncertainty of Wentz’s health. While Foles has been a starter in the league, he is no Carson Wentz.

When asked about Wentz in the post game press conference broadcast on NBC Sports Philadelphia, Pederson told reporters that he “[didn’t] know anything yet until [they] evaluate him fully tomorrow.” While Wentz’s status is unclear at the moment the consolation prize is that the Eagles add another division banner to their arsenal. Wentz’s status will be clearer in the coming days as Eagles’ fans collectively hold their breath.

The Eagles next head to MetLife Stadium to take on the maligned New York Giants. Kickoff is at 1:00 p.m., the game will be broadcast on FOX, and most likely feature Foles under center. Hold on to your hats; the ride is about to get bumpy.