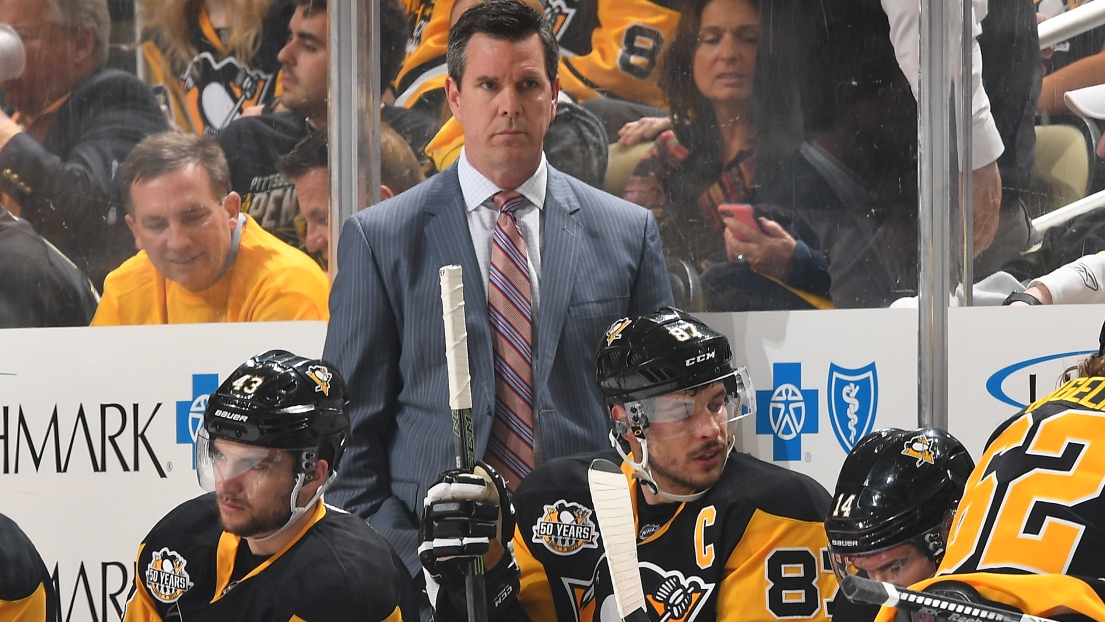 “Ghost of the Future, I fear you more than any spectre I have seen.” – Ebenezer Scrooge

What Scrooge said in A Christmas Carol was echoed by GM Jim Rutherford 172 years later. After the first 28 games (one-third) of 2015-16, Pittsburgh was out of the playoff picture, despite the addition of Phil Kessel to the talented roster. The situation looked alarmingly like the previous season when Pittsburgh eked out a wild card spot at the end of 2014-15 but were eliminated in the first round of the playoffs.

The years of underachievement since the 2009 championship and the trading away of actual and future first round draft picks led many to believe the Pens were pissing away the best years of Sidney Crosby and Evgeni Malkin with only one Cup win. Rutherford, you, me and all Penguins fans looked into the spectre of the future and were rightly filled with fear.

In a franchise-correcting transaction, Rutherford decided to fire Mike Johnston after a loss to Los Angeles exactly two years ago and installed Wilkes-Barre/Scranton bench boss Mike Sullivan as the 22nd head coach of the Pittsburgh Penguins.

Two years and two Cups later is a good time to examine Sullivan’s time behind the bench. What made Sullivan clearly the right man at the right time to rejuvenate the Pens?

One of the hallmarks of Sullivan’s tenure was emphasizing speed – relentlessly out-skating opponents to the puck and stifling the other team by keeping it from them. “If we want to play fast, we have to train fast,” said Sullivan to his team in the Pittsburgh is Home documentary. “You guys have to be on your toes. We have to be ready to skate. Embrace the race. We are in a race here.”

Many were puzzled when Rutherford dealt David Perron to Anaheim for Carl Hagelin a month after hiring Sullivan, but the Swede with speed fit into Sullivan’s philosophy of being one of the fastest clubs in the NHL.

The Pens allowing 2 shots in the final period with the Cup within reach and SJ desperate is an incredible sign of their determination.

Prior to the clinching game of the 2016 Stanley Cup Final in San Jose, Sullivan reiterated his emphasis on speed: “Let’s challenge them with speed in every zone. They can’t handle your speed. Everybody’s got to buy in: Penguins’ hockey, fast and fearless, chipping bodies, attention to detail. Let’s get this thing done. Enough is enough.”

Time and again, as they had done throughout the 2016 playoffs, Pittsburgh outskated San Jose to the puck or would swarm a Shark puck carrier quickly, eliminating time and space to pass or even to make a decision, thus forcing turnovers.

How many times during the later years of the Dan Bylsma era did we see the Penguins melt down in the playoffs? Far too frequently.

In 2012, the Penguins were clear favorites to defeat Philadelphia in the first round but instead crumbled under pressure when faced with adversity. Yes, Marc-Andre Fleury turned in an historically bad goaltending performance but everyone from Crosby, James Neal, Kris Letang to Arron Asham all became unhinged, losing their composure at the slightest provocation.

The same type of thing happened the following spring against Boston. The Penguins quickly developed the reputation of being a team that was easily distracted and easily incited to fight.

Sullivan quickly put a stop to that. “Just play,” he repeated over and over. Play the game. Walk away from post-whistle scrums, opponents who are slashing you, poking you and trying to get under your skin or goad you into retaliating. Just play hockey.

“Here we are again, knocking on the door. We have to bang it in. Let’s just play the game the right way – shift by shift – regardless of what happens. If the momentum swings, we just play. We just play,” Sullivan said, in San Jose.

Earlier in that year’s playoffs, there was a short but telling sequence when Evgeni Malkin was chirping the refs after a penalty call. Immediately, Sullivan glared at Malkin and yelled, “Hey! Shut the fuck up!” That’s something that Bylsma would never have said to his stars. Sullivan did, taking command of his bench, winning his players’ respect, always steering them to focus on just playing hockey.

Creating the fast and nearly unstoppable HBK line late in the 2016 regular season was a great example of extracting the most productivity from his roster. Moving a perennial top-line wing like Kessel down to the third line along with Hagelin and Nick Bonino presented a matchup headache for all opponents, especially Washington who had no answer after putting all their effort into trying to stop the Crosby and Malkin-centered lines.

Additionally, Sullivan trusted younger players on the roster who had merited playing time. Bryan Rust was a young player who Sullivan recognized had the skill to play top six minutes in the 2016 playoffs despite just four regular season goals in 41 games. His faith was rewarded when Rust scored six times in the postseason, singlehandedly winning Game 7 against Tampa Bay with a pair of goals.

This past season, Sullivan did not hesitate to place Conor Sheary and the rookie Jake Guentzel with Crosby reasoning that uniting speed and skill with Crosby’s exceptional talent would yield results irrespective of differences in years of experience. Guentzel flourished and led the playoffs in goals. Meanwhile, Sullivan placed veterans Patric Hornqvist and Hagelin on lower lines late in the Stanley Cup Final yet both scored in the deciding game in Nashville.

Sullivan handled his goaltenders to perfection in the spring, riding Fleury to victory in the first two rounds before definitively going back to Matt Murray part way through the Ottawa series despite Fleury having played very well in the playoffs. Sullivan left no room for ambiguity: Murray was the starter, Fleury the backup. No goaltending “controversy” in Pittsburgh.

In Part 2, we’ll take a statistical look at Mike Sullivan’s 2 years with the Penguins.