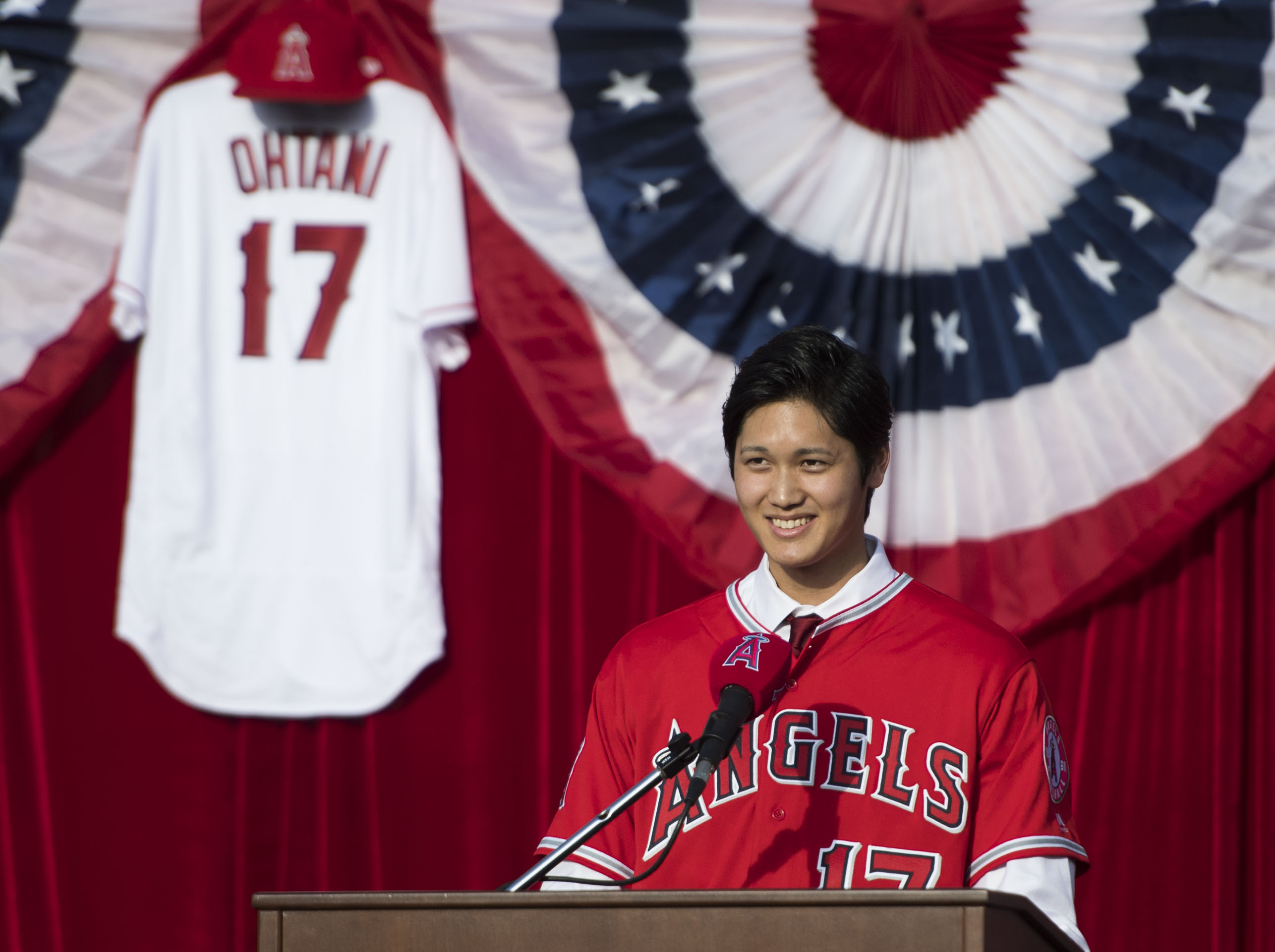 I’m still a bit giddy about the Angels signing Shohei Ohtani. Attending the press conference was an incredible experience, and I was thrilled to get to ask a question on behalf of the fans.

As I’m processing all the information that came out, I had some thoughts on the signing and the implications going forward. Rather than write a series of long columns, I’m just going to get the thoughts out in bullet form. These are all just opinions, but, they have been the ones that have been dominating my thoughts since the press conference.

*  Watching Ohtani in the press conference, he has a lot of poise. I, like many others, was surprised at his sense of humor and his humility. Having interviewed many of our prospects, it’s often hard for younger players to be able to handle the pressure of interviews. They often struggle giving answers to open-ended questions. For a long time, the Angels haven’t had a player who could give great post-game quotes. Ohtani looks like he will make for some great lines which will make reading about the Angels a lot more fun.

*  Physically, I was surprised by how big he was. Prior to the press conference, I only had pictures and video to go off of, which often doesn’t give an accurate size comparison. Sometimes, when I meet players for the first time, especially prospects, I have one impression going in and come away with an entirely different impression. In the case of Ohtani, he really did impress as someone with a power arm and a power bat potential.

*  About nicknames, I directly asked Ohtani if he had any nicknames to date or if he had any good luck items that he liked to see on signs. He said “I saw some guys out there with Ohtani jerseys already, so that made me very happy. But, I don’t really have a nickname, so hopefully they [the fans] will come up with one.” Right now, I’m partial to Sho-Time, especially on games that he pitches. But I also know that there are plenty of fans with better ideas out there. I encourage you to do so!

*  As much as fans like to worry about Mike Trout, and whether he’d stay long-term as an Angel, I think we have a good answer to that question. Clearly, talking with Mike Trout made an incredible impression on Shohei. Whatever Mike Trout said or did during the meeting was pivotal in the decision-making process. I can’t imagine Mike Trout playing that instrumental a role for an organization that he didn’t like long-term. And, I know the Angels will do everything to keep Mike Trout as an Angel. So, I’m even more excited about watching these two phenomenal players spend many years together in Anaheim.

*  If you’ve been on the fence about buying Angels season ticket plans, you really should do so now. The excitement is palpable. It hasn’t felt like that since the Angels signed Pujols. There is definitely something in the air, and I expect Angels tickets will be selling at a premium, especially on games when he pitches. I remember going to watch Nolan Ryan pitch, but wasn’t old enough to buy the tickets. But, in talking with those who did, they’d always talk about the crowds swelling on days he pitched. With Ohtani, I fully expect the same thing. And, in talking with Scioscia, he’s not ready to commit to any Opening Day starter at this point, so trying to calculate what days Ohtani will pitch will be nearly impossible. At the very least, I’d strongly encourage people to buy at least a 20-game mini plan.

*  More on the schedule: I have no doubt that the Angels will add more promotional items next season related to Ohtani. From what I was told, the Angels sold out of Ohtani jerseys prior to the press conference. With the way that Ohtani spoke, and connected with the fans, I can easily see him becoming highly marketed. You will want those items, so again, I’d consider getting a 20-game mini plan at the least.

*  I asked Billy Eppler about the dueling trades for international money with Minnesota. He didn’t want to get into the fan narrative that trade was made solely for Ohtani or that it was a dueling trade with the Mariners. He said that the Angels have some “agreements in principle” in reference to the Braves prospects, but that they hadn’t been finalized before the Ohtani signing. He said that the Angels weren’t sure about the timing of the deals with the prospects and Ohtani, and that the Pearson deal was made with overall strategy to maximize the Angels’ flexibility. With extra international money that they received in the trade, the Angels could switch the pool of money used for the Braves prospects in the event they lost out on Ohtani. As much as fans wanted to make more of it as a competing deal with the Mariners, I think that is more of a fan narrative. As confirmed, though, Ohtani will get the entire amount of the Angels’ remaining international money.

*  The Angels are going to be busy at the Winter Meetings. They may or may not make any trades or signings during this week specifically, but from all appearances, they expect a long and busy week in Florida. They are definitely less interested in upgrading 1B, but, I don’t think they’d pass up a good deal to improve the position. Albert will hopefully cover the position for about 50 games a season. I expect him to get more rest this year–maybe resting on day games after night games, especially if he starts the night game. So, I can’t entirely rule out an upgrade to 1B, but definitely see 2B as an absolute priority, followed by adding to the rotation, and upgrading 3B. Anything beyond that, such as a bullpen arm, would be gravy.

*  Why the concern about upgrading the rotation? The Angels really seem open to the idea of a 6-man rotation. That would keep Ohtani on his usual schedule, and might cut down on the wear-and-tear on the rest of our starters. Don’t be surprised if we are connected with several (or every) mid-tier pitching FAs or possible trades.

*  If we go to a 6-man rotation, we will be down to a slim bench. I can see the need for adding a defensive SS/2B utility player to provide backup. David Fletcher, one of our Minor League prospects who can play both positions will become more important next year for depth. I think he will stay in AAA next year to keep developing his bat, but, I do think that he will get a long look in Spring Training.

*  Scioscia really will be flexible with how he develops Ohtani in Spring Training. There really isn’t a rule book on this. And, as Scioscia pointed out, Spring Training will be shorter this year than in years past. So, he and the Angels will be working closely with Ohtani and his people to develop a plan to get him ready for the season as both a pitcher and a hitter. There will be some experimentation, but Ohtani will be in the driver’s seat on the whole process.

*  As fans, we all need to remember that Ohtani is still just 23. Most players that age are still in the Minor Leagues. As much as Scioscia and Eppler raved about Ohtani’s pitching and hitting, and talked about his potential, they also wanted us to know that Ohtani is still developing. Regardless of what happens, we, as fans, need to take it in stride. If Ohtani struggles with one aspect of his game, we need to have patience. Let’s resist the urge to overreact to every little detail of the season. There’s no doubt that Ohtani is a special talent, but everyone struggles at some point. Let’s not let our passions overcome our reason, and let’s remember, he is a 23 year old player trying to do something at the Major League level that hasn’t been done in a long time. There may be some growing pains, but that’s okay.

*  The Angels are going to need another press box. The amount of coverage that Ohtani will generate will be staggering. The current press box holds very few people, and in no way could accommodate all the media that will be in attendance. I could easily see the Angels taking one seldom used section, maybe way out in the 400s/500s and turning it into another press box. One or two advertisements in the stadium could easily pay for that improvement.

*  In trying to figure out how important this deal was for the Angels, I tried to estimate how much of an increase signing Ohtani would make to the Angels value as a franchise. With this move, the Angels became a global brand, and I can easily see this adding up to $500 million in value to the franchise, and possibly more, depending on how well Ohtani does as a player. With the potential for international marketing, broadcasting rights, etc., it will be interesting to see how Forbes ranks the value of the franchise in the future.

I’m sure there are a lot more thoughts and opinions that will come up in the ensuing days. But, these are the ones that I’ve been thinking about the most so far.