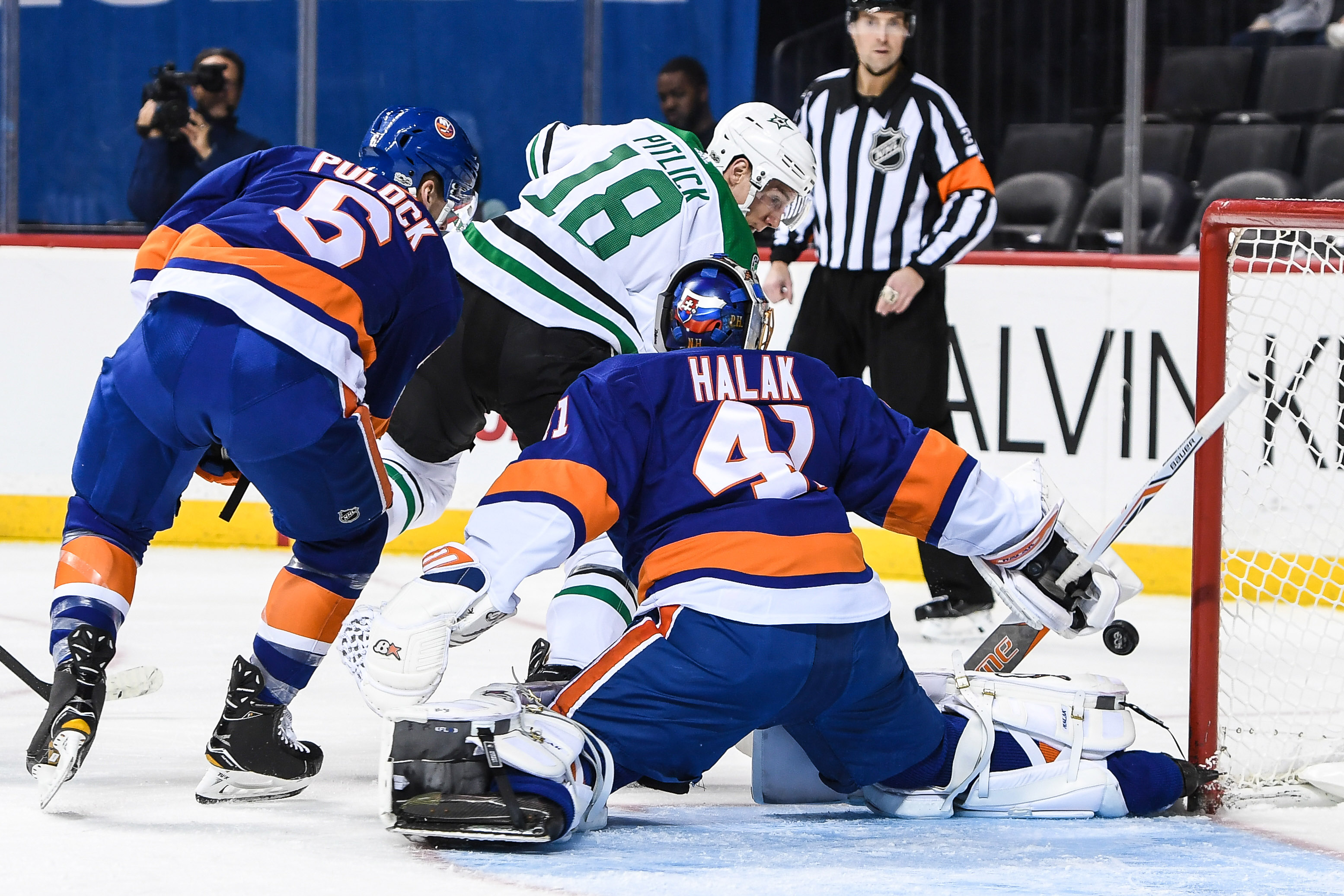 NEW YORK — The Islanders were down by five by the time they scored their first goal of the night and it was far too late for New York to pull itself out of the hole it dug. In the end, a sloppy performance led to a 5-2 loss to the Dallas Stars on Wednesday night.

Tyler Pitlick scored twice for the Stars, with his first goal of the night coming in the opening minutes of the first period and his second occurred 21 seconds into the third period. Alexander Radulov, Remi Elie and Jamie Benn also scored for Dallas.

Anders Lee scored the Islanders’ only goals of the game in the opening and closing minutes of the third period. It was his 18th and 19th goals of the season and moved him into the team lead in goals.

Pitlick’s first of the night came off a fortunate bounce from a shot by Dan Hamhuis. The shot ricocheted off the end boards and Pilick backhanded the puck by Jaroslav Halak. A wrist shot from Radulov snuck through the pads of Halak for the Stars’ second of the game at 15: 46 of the first.

Elie scored off a rebound to start the second and Benn beat Halak with a wrist shot from the high slot to make it 4-0. The Islanders made a goaltending change afterwards, but Pitlick found the back of the net to start the third period.

Lee responded with a goal less than a minute later and added his second of the night with 3:32 left in the game.

1. This is a game the Islanders would like to have back. Five goals against, four of which came against their starter Jaroslav Halak, and a rather sluggish effort to boot. Sure, the Islanders had their moments when they put pressure on the visiting Stars. A four, five minute stretch in the first period made it look as though the Islanders might turn things around. The most notable moment was a Tavares redirection from the side of the net that was stopped by Kari Lehtonen

Moments later the Stars rushed the other way and took a 2-0 lead.

2. Jaroslav Halak appeared as though he was starting to shake off whatever was keeping him from playing at the level the Islanders needed him at. On Monday against the Washington Capitals, he had his best performance of the season and had been playing consistently over his previous few starts. However, it was back to the old ways on Wednesday with Halak surrendering a few soft goals — notably, the second goal of the first period that killed the Islanders momentum — and eventually got pulled from the game in the middle of the second period.

The streakiness of Halak and Greiss for that matter has been one of the Islanders biggest flaws this season. When Halak and Greiss play well they’re a huge asset to the team, but on night’s like Wednesday they can be a real detriment.

3. “I think he knows you got to have the second (goal). The first one, he releases the puck and bangs off two legs and from behind the net kind of banks it off him. It’s just frustrating. We’re all frustrated. I’m sure he is too. We want to get a roll together. I think it was a sluggish game, but it was a sluggish game by both teams.” — Doug Weight on Halak’s performance

4. The struggle for the Islanders seems to be finding that consistency in their performance. They played one of their most complete games of the year against the high-powered Capitals, but with another challenging opponent in Brooklyn on Wednesday the Islanders couldn’t find the same jump they had.

“Well the good thing is we started off this season having (consistency),” John Tavares said. “Last year we didn’t. It took us a while to find so we’ve done it and I think there’s a confidence here that it’s there. It’s just making sure we’re not straying away from it.”

Tavares: "I think some things didn’t go our way, but I don’t think we helped ourselves the first half of the game. We just seemed a little sluggish. It's disappointing and it's a good thing we get a chance to respond tomorrow." #DALvsNYI pic.twitter.com/Iccj8Kgabl

5. Perhaps one of the more interesting things to come out of postgame was Weight’s rather interesting comment about the team’s third line (Anthony Beauvillier, Brock Nelson and Josh Ho-Sang). Nelson has three goals in his last six games, but Ho-Sang hasn’t scored a goal since November 22 and is pointless in his last five games. Beauvillier hasn’t had a point in his last six games and hasn’t scored since the December 1 loss to the Ottawa Senators.

When Weight was asked if he needed to see more consistency out of that group he responded, “yeah definitely.” He followed up with, “it’s becoming an issue,” and then took a long pause before another report broke the silence with a different question. It was a rather cryptic response from the usually forthcoming head coach of the Islanders.