My next big running goal -- the 4-Way Challenge With Extra Cheese at the Flying Pig Marathon! 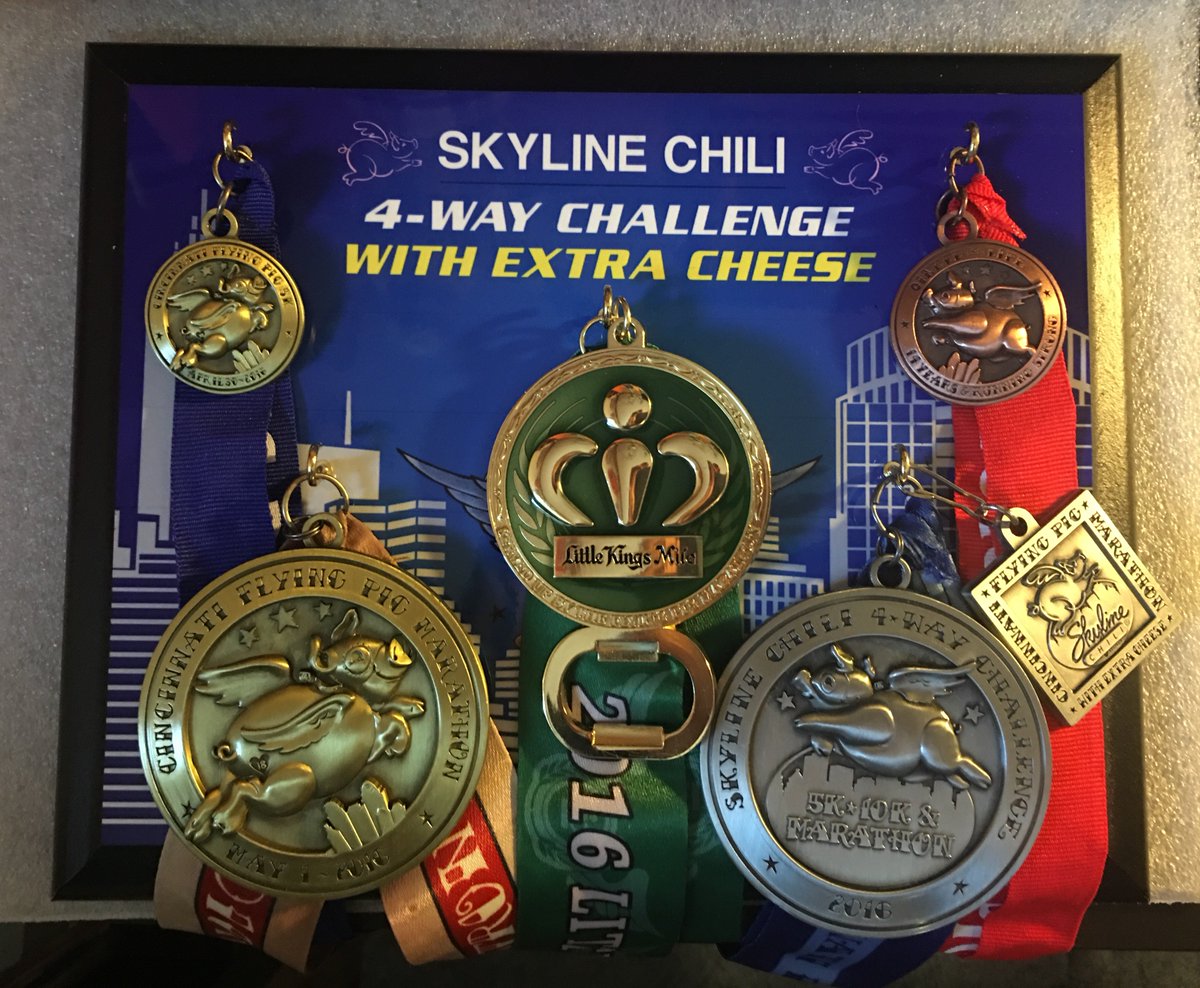 My next big running goal -- the 4-Way Challenge With Extra Cheese at the Flying Pig Marathon!

Exciting news! I am doing the Flying Pig Marathon in Cincinnati, Ohio on Sunday, May 6, 2018. Not only that, but I’m making a weekend out of it and doing what’s called the Skyline Chili 4-Way Challenge With Extra Cheese. This consists of the Little Kings Mile at 8 p.m. on Friday, May 4. Then I’ll run the Toyota 10K at 8 a.m. on Saturday, May 5, followed by the Tri-State Running Company 5K at 10:00 a.m. that morning. I’ll do the official pasta dinner, the Walmart and Sam’s Club Flying Pig Pasta “Pig-Out,” that Saturday night and then run the Flying Pig Marathon, powered by P&G, at 6:30 a.m. Sunday morning. So do the math: I will run 36.5 miles this weekend in a little over 40.5 hours!

The Flying Pig is celebrating its 20th anniversary this year, and over 30,000 people run in this race weekend. I’m excited to be one of them. Thanks to the good folks behind the Flying Pig for hooking me up with this great event! I can’t wait to do this!

I first heard about this race from Staten Island running legend Chris Calimano. My initial plan was just to do the marathon, but then I decided to go all the way with the 4-Way, and throw on the extra cheese as well!

So after I do all of these races, I’ll get a medal for each race, plus an overall medal. I’ll also get a race shirt for each race, a cool bag, an event poster, virtual goody bag, and even a finisher’s jacket! There’s also a race expo that weekend (I love going to race expos!), a free concert and street party on Friday night, and a post-marathon party.

This is pretty much everything I love to do with running — races, expos, swag, and parties! Oh, and lots of pig-related puns, too — the race corrals are described as pig pens!

While I did run a 15K last weekend for the first time, with the NYRR Ted Corbitt 15K, I’ve never done a 10K race followed by a 5K. Let alone a marathon the next day (not to mention the Friday night 1-miler)! But I think this is a doable, albeit a little scary, goal.

Over the last few years, as I’ve been on my fitness/weight loss journey, I’ve learned a lot about myself, and what makes me happy. I like having things to look forward to — especially road races! I like having new experiences. And I like setting big fitness goals and reaching them.

In 2017, I did my 50 for 50 goal — running 50 races (actually, 54 and counting!) in honor of turning 50. For 2018, among my many goals for the year, I want to do something different, that I haven’t done before, but that is still a challenge. I also have a bucket list goal of running marathons in all 50 states, something that may take me into my 90s, but something I ultimately hope to achieve before I kick the bucket. So this will be State #3.

I’ve never been to Cincinnati (although I was a big fan of WKRP in Cincinnati!) so I look forward to seeing a little of the city as well. I will also be in neighboring Kentucky for part of the marathon!

Thanks to my fitness journey so far, including two triathlons and three marathons, I have the confidence to go after even bigger goals. So now I’m happy to be aiming to do not just a marathon, but a 1-miler, 5K, and a 10K in the same weekend. If pigs can fly, then I can do this! Wish me luck.