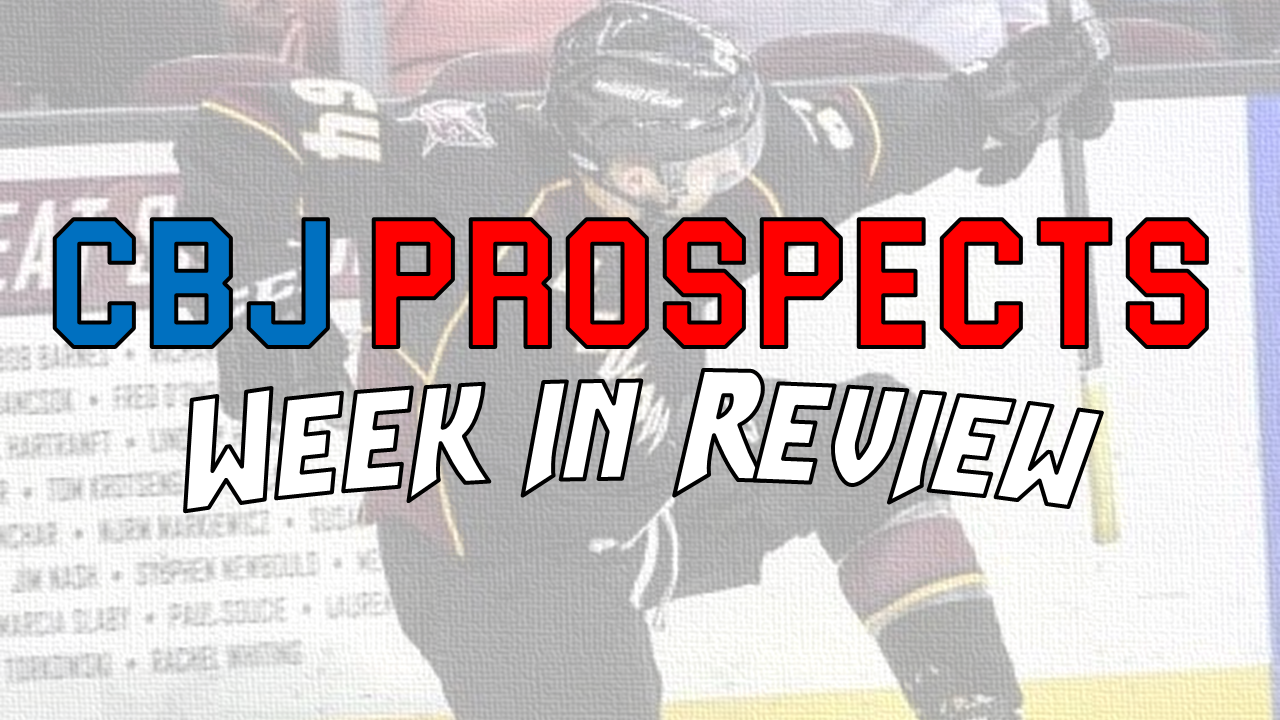 Greetings all, time for the week in review! We’ll be a little bare bones this week due to some technical difficulties.

After a week off from the recap, the Monsters were back with a weekend series against Chicago. Friday night was Teddy Bear Toss night at the Q and it took just a period for the fur to fly (I regret nothing). Local boy Carter Camper scored five minutes into the second period. After a Wolves goal, Alex Broadhurst scored his third of the season when he picked up the rebound of a Brady Austin shot that the goalie couldn’t corral. Midway through the third, Camper found Paul Bittner in front who got credit for his fourth goal of the season after some discussion by the referees. Matiss Kivlenieks made 36 saves for his third win of the season.

Saturday night did not go as well. The Monsters were shutout for the second time in three games. In the loss, Ivan Kulbakov who made his AHL debut, had 29 saves.

Kole Sherwood-Kitchener Rangers (OHL)
Season Stats 21GP 12-11-23 -3 18PIM
Kole and the Rangers opened the week with a game against Windsor and it would get ugly fast. The Spitfires built a 4-0 lead before Kitchener got on the board and clawed back to make it a game. Trailing 6-4, Kole picked up an assist on Adam Mascherin’s goal to make it 6-5 in a game that ended 8-5.

After going without a point against one of his old teams, the Flint Firebirds, Kole made it back to the scoresheet. Playing against Guelph, with the Rangers leading 2-0, Joseph Garreffa led the rush into the zone before passing to Kole. Sherwood found Adam Mascherin who made it 3-0. Early in the third with the Rangers leading 7-2, Kole won a puck battle and got the puck to Mascherin who threw the puck out in front to Greg Meireles. The latter made it 8-2 in a 10-3 Rangers win.

Vitaly Abramov-Victoriaville Tigres (QMJHL)
Season Stats 27GP 16-25-41 +9 25PIM
It was a busy but successful week for Vitaly. Starting off against Sherbrooke, with the Tigres leading 5-1, Ivan Kosorenkov and Abramov skated in on a two on one with trailers. Kosorenkov threw a cross crease pass to Abramov who scored to make it 6-1 in a 7-1 win.

Up next in a game against Rimouski, Vitaly earned an assist on Ivan Kosorenkov’s goal to tie the game at one but it’s hard to see in the highlights. In the third, with the Oceanic leading 2-1, the Russian connection struck again when Abramov sent a pass out in front to Kosorenkov who fired a shot that led to chaos in front. It almost looks like it was an own goal that tied the game at two. The game went to a shootout where Abramov missed and the Tigres fell by a score of 3-2. In the loss, Vitaly was named second star.

Closing out the week against Chicoutimi, Vitaly would end up as the hero. In the third with the game tied at two, Vitaly gathered a loose puck at center ice. He then skated into the zone before snapping a shot off just above the circle to make it 3-2 which would stand as the final score. In the win, Vitaly was named first star.

The Russian’s four-point week propelled Vitaly into the top three in Q scoring where he is tied with Matthew Boucher (who has played six more games that Vitaly).

In international hockey news, last week Russia announced the remaining players for its World Junior camp and Vitaly was among the 10 players from North America. An article in The Hockey News World Junior preview issue also believes that Vitaly is one of Russia’s top players (which should shock no one if you’re a long time follower of the Meteor Man).

Robbie Stucker-Chicago Steel (USHL-Committed to Colorado College)
Season Stats 19GP 3-8-11 -2 18PIM
Saturday night, Robbie snapped a four-game pointless streak by earning a new nickname. In the first, just after a power play, Robbie got the puck at the blue line and unleashed a shot that unleashed the bears as it was the Steel’s Teddy Bear toss night. As a result, some have been calling Stucker “Teddy.” The Steel would win the game 7-3.  I’ve been saying for years that I would send a stuffed Stinger if a Jackets prospect ever scored a Teddy Bear goal and I’m going to.

if you’d like to send an animal to the Steel, here’s the address:

There you have it folks! Next week will be heavy on the French as we’ll recap Alexandre Texier and France’s attempt at moving into the World Juniors next year as they compete in the World Junior Division 1 Group.