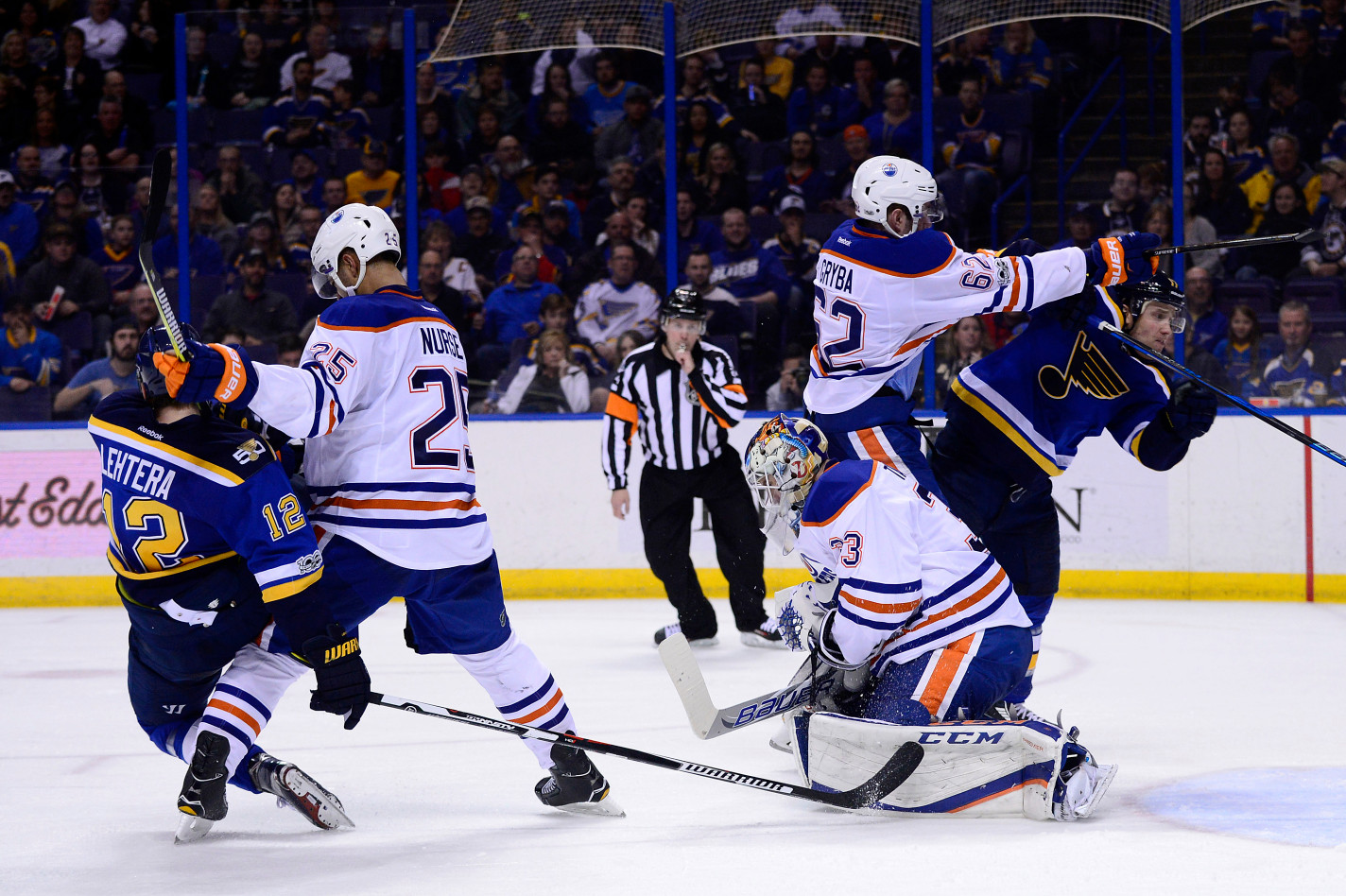 Is the third time the charm for the Edmonton Oilers? They are certainly hoping so tonight as the club goes for its first three game winning streak of the season. Not only that, but the Oilers are searching for their first win against the Blues this season in, yes, their third try. Hopefully the old saying holds true for the Oil tonight.

Return of the Rej! Oh yes, Andrej Sekera is back. After being activated off IR this afternoon, the veteran defender will make his season debut after suffering a torn ACL during the second round of last spring’s playoffs. He’ll replace Oscar Klefbom, who went on IR on Tuesday. Sekera’s return is another step toward full health for this Edmonton team.

Cam Talbot starts for the Oilers while Jake Allen gets the nod for the Blues.

Edmonton: Hit the Blues early with your cycle game. St. Louis has been struggling as of late and looked completely non-engaged last night in Calgary. Throw a couple hits early, get pucks deep and fire some shots on Allen in the first few minutes. Do that and you’ll likely set the tone for the night. Set the tone and you should walk away with two points.

St. Louis: Get back to basics. The Blues, as mentioned, have been struggling lately and simply haven’t been able to score five-on-five. If they want to get back to their dominating selves, then they’ll have to get back to basics. Make the simple plays and stay within the system. It worked perfectly in the first two meetings between these teams.

Edmonton: The man they call Papa Rej is back in action tonight and is the player to watch for Edmonton. It’s likely going to take him a little bit to get back into the swing of things, but Sekera is a huge addition to Edmonton’s defensive group. He’s calm, can settle things down and moves the puck quite well. People don’t realize how badly the Oil missed Sekera this season.

St. Louis: A first round pick back in 2016, Tage Thompson is still adjusting to life as a professional hockey player. After five games in the show, Thompson is pointless and -4, but he’s still my player to watch tonight. Why? Although he’s struggled so far, he’s got the perfect skill set for the Blues and has the tools to be a successful NHL’er. I look forward to seeing him live at the highest level for the first time.

As mentioned above, the Oilers are getting Andrej Sekera back tonight and he’ll replace Oscar Klefbom in the lineup. Eric Gryba and Yohann Auvitu are expected to be the scratches on the back end, while Anton Slepyshev is expected out up front. That means Mike Cammalleri draws in for Nathan Walker, who was claimed off waivers by Washington yesterday.

The Blues played last night, so they didn’t skate this morning and we likely won’t have a confirmed lineup until the teams warmup in a few hours. Jay Bouwmeester is expected to miss tonight’s tilt, while Tage Thompson will see the Oilers for the first time after missing the previous two meetings.

This is the second of a three game home-stand for the Oil, who will host Montreal on Saturday night before breaking for Christmas. Edmonton will visit Winnipeg for a game next week before concluding 2017 with two more home games. They’ll host Chicago and Winnipeg in those affairs.

Interesting quirk to tonight’s game, as the Blues look to return the favor on Edmonton. The Oilers swept the season series between these two a year ago, including two road victories. A win for the Blues tonight will accomplish the exact same feat for St. Louis, who crushed Edmonton 8-3 exactly one month ago today in St. Louis.

Oscar Klefbom was placed on IR Tuesday, but it sounds like a minor issue for the Swedish blueliner and a chance for Edmonton to rest him. Thanks to the Christmas break, Klefbom could miss only two games before returning to the lineup. Tonight will be one of those contests. Luckily Andrej Sekera is making his long awaited season debut.

Third time is the charm? Third time is the charm. The Oilers will finally win their third straight tonight and finally top the Blues this season. The Oil are finding stride while the Blues are in their first true slump of the season. Edmonton takes this one 5-2 on goals from Sekera, McDavid, Maroon, Cammalleri and Strome, while Stastny and Brodziak tally for the visitors.