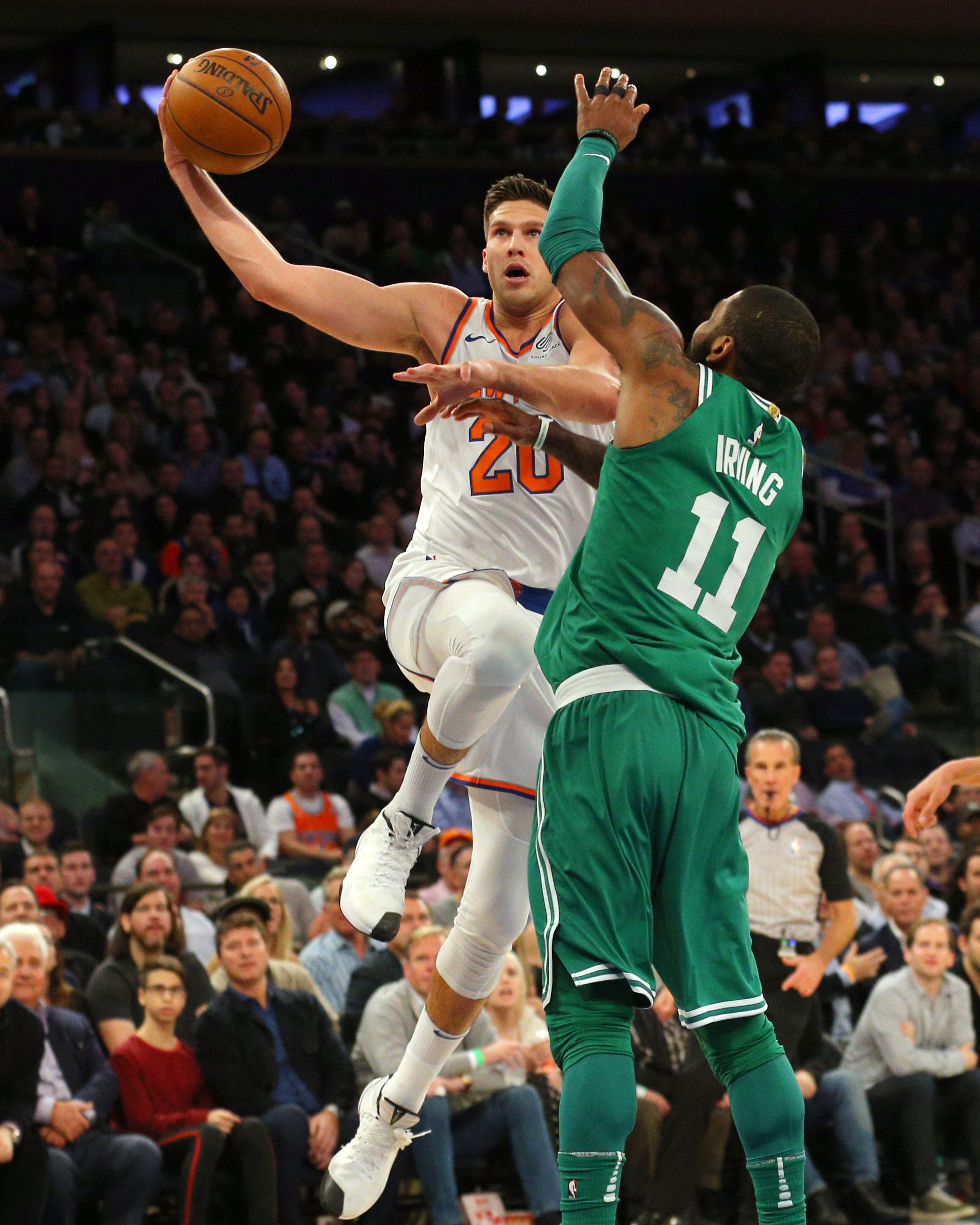 The Celtics sat Jaylen Brown to rest his sore achilles during this brutal stretch of 10 games in 15 nights, and his loss was felt on both ends of the court. The Knicks’ Michael Beasley exploded off of the bench: he scored 28 of his 32 points in the second half and added 12 rebounds to make for a career night. Kyrie’s 32 points led Boston, but the Celtics offense seemed rudderless without him, and Boston has now lost two in a row for the first time since starting the season 0-2.

The Celtics offense looked out of rhythm to begin this game due to their inability to force a miss and get into transition. This became a trend as the game wore on, and Boston wound up with an unacceptably low number of fast break points because of it (just 4 points). Credit the Knicks, who started the game making six of their first seven shots, to give Boston their earliest double-digit deficit of the season after a Courtney Lee trey-ball made it 13-2 with still over 45 minutes of game time remaining. The Celtics were giving up offensive rebounds like it were their job to begin tonight, and they ended up giving up 6 to the Knicks in the first quarter alone (10 OREB in the first half – but allowed just one more the rest of the way). All of these offensive rebounds gave the Knicks more field goal attempts and, more often than not, resulted in easy baskets around the basket for New York big men Kyle O’Quinn and Enes Kanter. Not Porzingis, though. “The Unicorn” was a non-factor during the quarter as he missed all of his shots and laid the foundation for one of the ugliest shooting nights of his career. Boston still trailed the Knicks 25-15 at the end of the quarter, though, since Kyrie looked like they only person that wanted to score for the Celtics.

Let me know if this sounds familiar: the Celtics were able to hang around during the first half thanks to Kyrie Irving taking control of the game offensively. He was the only Boston player to score more than 2 points in the first quarter, and he finished the half with as many points as he had shots (14 points on 6 of 14 shooting). Once again, Kyrie looked particularly potent running the 2-man game with Al Horford. After Kyrie brought the ball up one possession, he passed to Horford at the top of the key then faked towards the back door, but pulled back towards the three point arc. Horford found Kyrie as he floated away from his man and drilled the deep ball to make it a 2 point game, 40-38, late in the first half. The Knicks had gone over 5 minutes without scoring during Boston’s comeback in the second quarter, and their best player had yet to score a point in the entire game. Kristaps finished the half scoreless after going 0 for 11 from the field and it’s fair to say he must HATE playing Boston; with the likes of Horford, Baynes, Theis, or even Smart aggressively defending him every time down the floor, the Unicorn looked like a shell of himself the entire night.

Instead, New York leaned on their other big man, Enes Kanter, who finished the half with 10 points and 10 rebounds. Many of his rebounds were offensive, including a last second put-back slam after he ran the court and cleaned up a Courtney Lee layup at the end of the half. The Knicks totaled 14 second chance points thanks to their 10 offensive rebounds at half (but credit where it’s due: the Celtics adjusted and only allowed 4 more second chance points the rest of the game). Aside from Kyrie, Boston was led by Horford’s 6 points and 5 rebounds; as well as Smart’s 5 points, 2 rebounds, and 3 assists in his spot start for Jaylen Brown. Boston and New York shot an ugly 34.9% and 32.6% from the field, respectively, but the Knicks led 44-40 at halftime.

The Celtics shot an abysmal 5 of 19 from deep in the first half, but that all changed during the third quarter. Jayson Tatum opened the flood gates with a three on the first possession of the second half, and Kyrie kept up the pressure with three more over the next three minutes. The Celtics were so hot from deep even Marcus Smart jumped in the mix – and it wasn’t at the end of the shot clock or anything! They started the second half 5 of 6 from deep but quickly cooled to shoot 50% (6 of 12) overall from deep for the quarter.

Tatum jumped back into the action by causing havoc on the inbound pass from Jarret Jack, stealing the ball on one end, then adding another shot from deep on the other. He wasn’t finished, though; as shortly thereafter he used a Baynes screen to pick up Kyle O’Quinn on the switch, then sent him spinning as he drove and finished with a beautiful up-and-under to put the Celtics up 66-57. Jayson Tatum finished with 17 points on 6 of 10 shooting for the night.

The Knicks answered with a 7-0 run, then continued the familiar trend of the night as they tied the game on a Kyle O’Quinn offensive-freaking-rebound slammed home at the end of three. The score was now knotted at 68 going into the fourth.

Michael Beasley turned into an unstoppable force as the Knicks cruised towards this win. He made 13 of 20 shots from the field and dropped 32 points on the Celtics tonight, the large majority of which occurred during the fourth quarter in particular (18). Terry Rozier, for his part, played great on the ball defense and Jayson Tatum continued his aggressive drives to continue this fight well into the fourth. The Celtics were briefly given life after they successfully trapped McDermott (shouts Smart and Allen) to get the ball back while trailing, 93-99; but Kyrie clanged a shot from deep off the rim with under a minute to go that effectively sealed the Celtics fate on this one. Final Score: Knicks win, 102-93.

During the third quarter, Abby Chin came on the broadcast to tell us that Enes Kanter, the man who was currently EATING against us, was indicted just the other day and is now a wanted man in Turkey. He has a long-standing feud with the Turkish government and President Erdogan, specifically. Apparently now he’s facing 4 years in jail for criticizing the president. Kanter is reportedly “not worried” about it, but… what the hell just happened?

The Hot and The Not
The Knicks addition!

Hot: Michael Beasley. That was an unbelievable night, the kind of night you’d never expect out of him, and he’ll likely never forget it. (32 pts off the bench, 12 of 20 shooting, 18 points in the fourth quarter, 12 rebounds)

Not: Kristaps Porzingis. That was an unbelievable night, the sort of night you’d never expect out of him, and he’ll likely never forget it. (missed every shot he took, committed more turnovers than made assists, Terry Rozier out-rebounded him)

Semi is slowly but surely improving:

Ojeleye with the trey 👌 pic.twitter.com/NnENzgOnqA

Kyrie is good for at least one pretty pass per game. Here it is:

No 👀 dime to Al for the jam! pic.twitter.com/pgiWL9Xe0O

As time was running out, Tatum somehow drilled a fall-away jumper from the top of the key. Filth.