Your Morning Dump... Where Tatum will get more touches... eventually 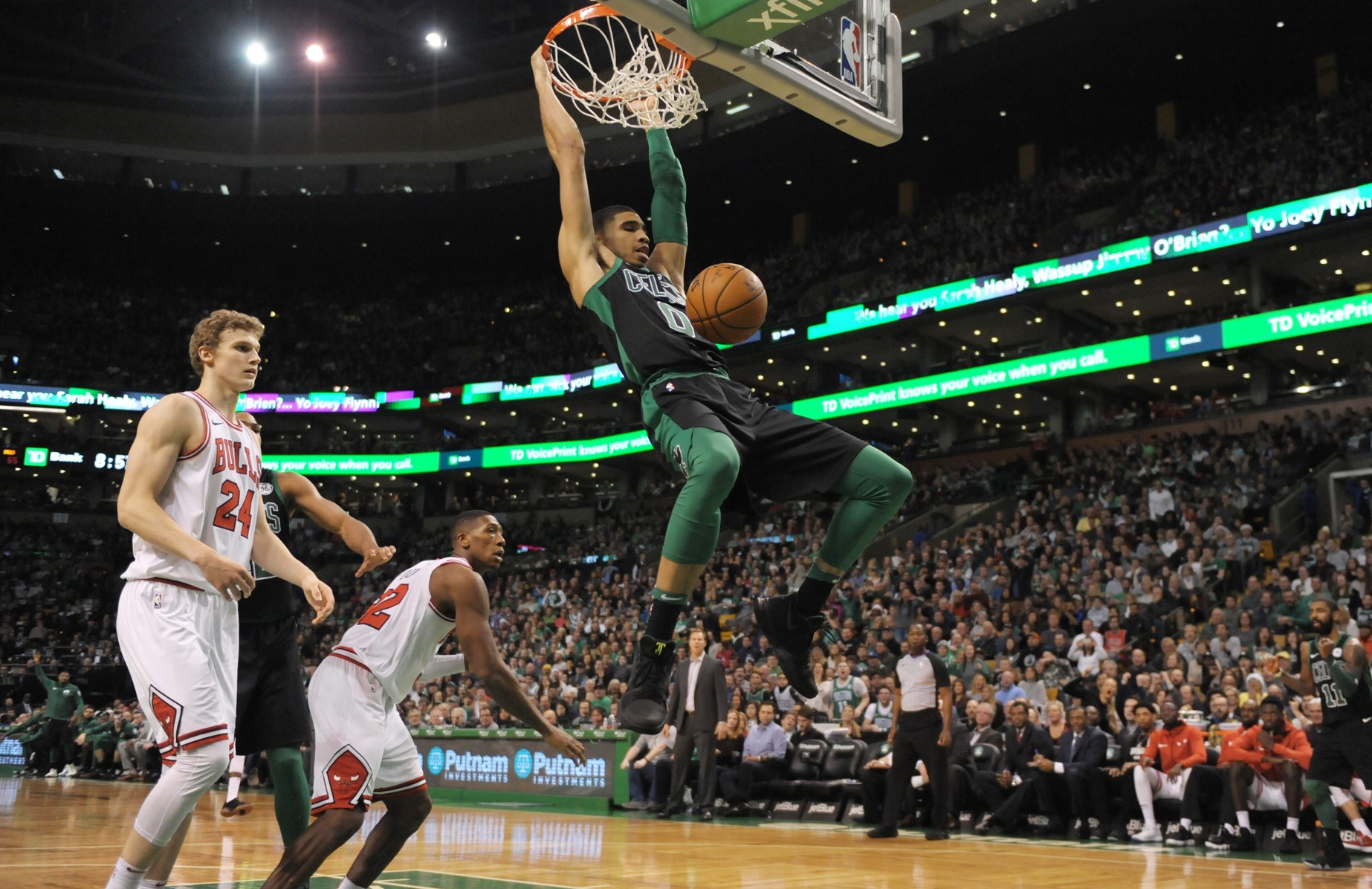 Your Morning Dump... Where Tatum will get more touches... eventually

“I think that’s a really fine line,” Stevens said. “There’s a reason you’re highly efficient. You make good decisions, you pick the right shots and everything else. But again, as we’re learning more about each other and as we go through this (busy) stretch, that’s why we’re looking forward to the next couple of weeks after this where we get a chance to practice. Because I think there are some things that we’ve learned that we can keep guys in what they do best but maybe enhance the number of things we can do for them.”

[…] “I just try to stay in my little circle,” Tatum explained. “And I don’t try to do too much. And when my opportunity comes, I just try to make the most of it.”

Tatum is tied with Al Horford for third on the Celtics in scoring (13.8 points) but he’s sixth in field goal attempts per game (9.2). That adds up to Tatum being the team leader in true shooting percentage (64.1%).

The kid is an EFFICIENT scorer.

So efficient that we can’t help but wonder… what would happen if he just took a couple more shots per game?

Tatum is currently tied for fifth among rookies in scoring but he’s the only one of the five taking less than 12.8 shots per game. But part of his efficiency, as Brad Stevens says, is that Tatum is really only taking the shots he has a great chance of hitting. If he actually did take those 15 shots per game, that math wouldn’t necessarily directly extrapolate to a 20 point a game scorer.

Tatum isn’t afraid to shoot. He takes the shots that work within the offense. If you read through the rest of Jay King’s piece, you’ll see Tatum talking about how he’s trying to wait and pay his dues just like the other guys on the team have, so he’s not going to just grab the ball and try to isolate for extended periods of time.

Sure, he’ll attack a certain matchup he knows he can dominate, but he’ll largely just be the overflow guy who swims in the wake of the sharks and feasts on whatever remains. It’s a good life for a rookie on a team with the most wins in the league.

Still, there’s more there for the Celtics to tap into. They can drill a little deeper to tap into his advanced offensive skills to make him more of an option down the road. As this December slog slowly begins to wrap up, the Celtics can finally have a few practices to try some new things.

Brad Stevens has 36 games of information at the moment and no opportunity to really put any of it into motion. With some practice time, they can work on new sets and player combinations to start maximizing some of the positive things we’ve seen.

So those of us clamoring for more Tatum like Christopher Walken begging for more cowbell will finally get it… eventually.

Page 2: The Celtics will actually try for an All Star Game

That part about the Celtics fans not being able to be at the game sucks, but that’s how these games end up going. It’s such a corporate event that we’ll just have to accept this downside if we really want to see it happen.

It’s tempting to say the league doesn’t want to risk holding it’s signature event during a February Nor’easter, but they put the game in Chicago in 2020 and there’s nothing quite as miserable as winter in Chicago. So weather won’t be the hold up.

Boston’s biggest issue is its size relative to other major cities, which makes it difficult to host a major event like this the way the NBA wants it to. If there’s ANY other event in town, it creates a big space crunch for hotels and the other ancillary events tied to the weekend. The early end to its nightlife doesn’t help much either… it’d be nice to let venues stay open past 2 a.m. for that weekend. The NBA is a late-night league… and parties that fire up after All Star Saturday can’t have just two and a half hours before wrapping up.

There’s a lot that goes into hosting the All Star Game and Boston has unique challenges. I’d love to see it in Boston, but I also want it done right. There’s no point in hosting that weekend if people are going to leave Boston with a bad opinion of the city.

Let’s do it the right way and have an awesome weekend. I think five years is enough time to figure it out.

Let’s check in on that Lakers pick!

Bogut says he and other players have talked about the distractions concerning the team’s direction in the future and about trying not to let it impact their play.

“We make light about it, we laugh about it, but you just can’t let it affect you,” Bogut said. “It is hard to tell young guys, 18, 19, 20 that come from a great college environment that are usually great cultures, that are built on team-first, and then you come into a situation like this sometimes where, kind of, guys don’t know if they are coming or going.

“That is just the way it is in professional sports. You have to just come in and do your job to your best ability. Tonight, collectively as a group, not just one guy, we just didn’t have that energy and focus.”

The Lakers are 11-20 and four games ahead of worst-in-the-league Atlanta. They’re also five games behind 8th-seed New Orleans so they’re still in an “anything can happen” stage of the season with 51 games left to play. However there are no delusions of grandeur in La La land.

This a group of guys starting to play for themselves. They know most of the team will be overhauled in hopes of adding superstar players, so there’s no incentive top sacrifice for the betterment of the whole. That breeds greed and discontent as guys go for theirs, often at the cost of others who are also trying to go for theirs.

This is all great for Boston, because it just increases the possibility of that Lakers pick falling in the 2-5 range and conveying in June. They probably won’t get so bad that they get the top overall pick, but this discontent could be enough to keep them from making any silly run up the standings.

As we sit here and wonder what the Celtics need in the future, keep this all in mind: They could add Gordon Hayward and a top 5 pick to this team to start next season. Before we go nuts trading the world in search of a new star, just keep in mind they could start next season with two more than are on the court right now.

Globe: Celtics wrap up win with monster third quarter  |  Richard Jefferson is enjoying every last moment in the NBA

BSJ: Kyrie Irving is having the best shooting month of his career  |  BSJ Game Report: Celtics 117, Bulls 92 — Second half domination