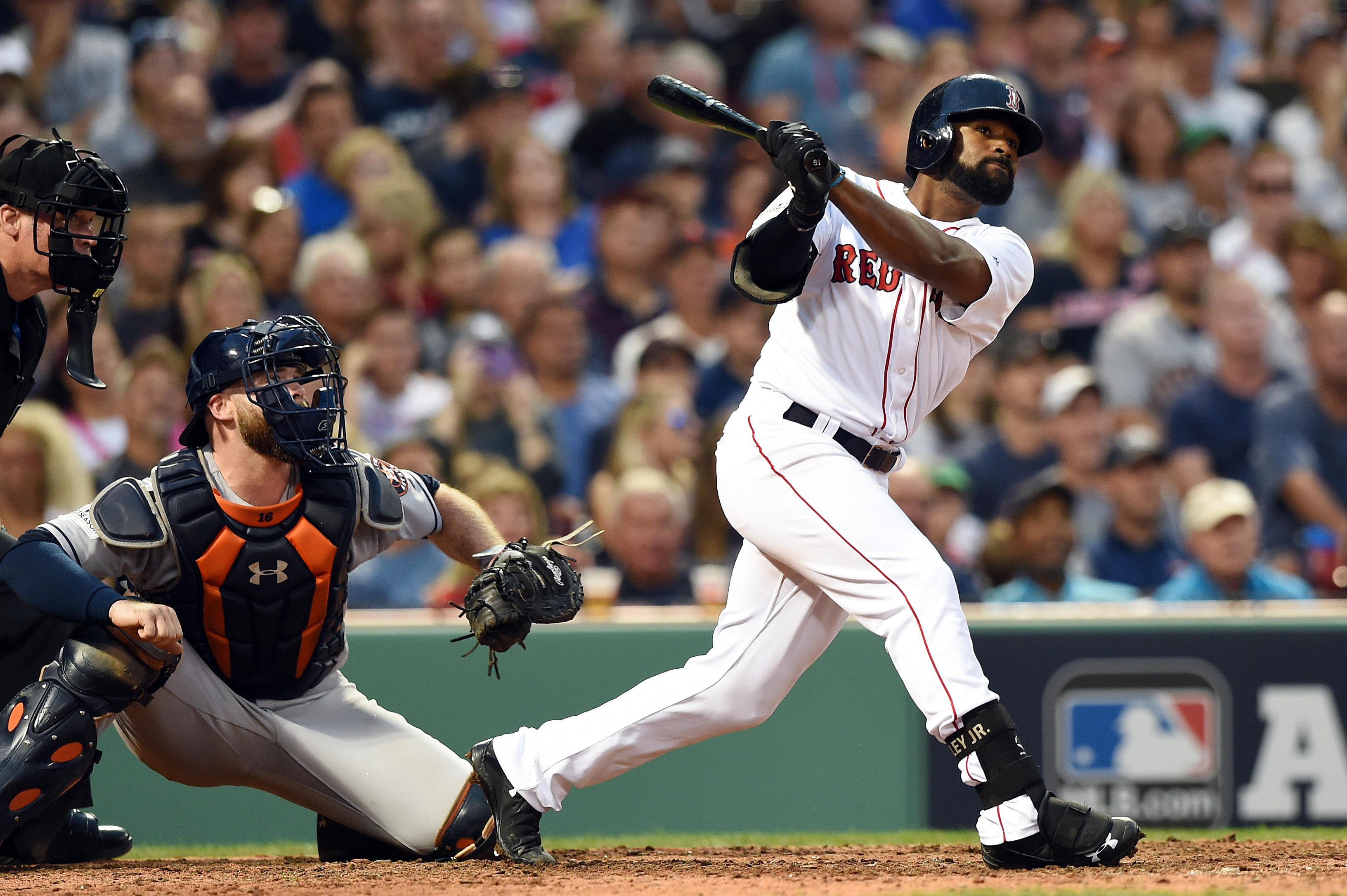 It’s no secret, you guys — the Boston Red Sox need to find a legit power bat this winter. It also no secret as to the person they’re pursuing to help fill that void.

No American League team hit fewer home runs (168) or had a lower ISO (.149) than Boston in 2017, and perhaps no team appears to be more of a perfect match for current free agent J.D. Martinez than the Red Sox. One problem here, though — other than the front office having to deal with Scott Boras — is the fact that Martinez has expressed a desire to sign as an outfielder despite his poor advanced defensive metrics.

Already armed with a very talented and young outfield, that’d mean one of Andrew Benintendi, Mookie Betts, or Jackie Bradley Jr. could very well be packing their bags in advance of 2018. From all the reports we’ve seen, Bradley is the most likely to switch uniforms if Boston has to make such a move.

Despite following a breakout year in 2016 (119 wRC+, .219 ISO, 5.0 fWAR) by taking a step back in 2017 (90 wRC+, .158 ISO, 2.3 fWAR), Bradley is still a valuable commodity on the trade market. After all, there aren’t many center fielders with the ability to hit 20-plus homers while playing above-average defense and being under team control at an affordable price through the 2020 season.

With that in mind, let’s see which of the following six teams make the most sense for him in a hypothetical trade scenario. A handful of the following squads have had a reported interest in acquiring Bradley, while a couple others in particular could be a good fit, speculatively speaking.

The need here is pretty obvious, don’t you think? San Francisco just shipped out their 2017 starting center fielder, Denard Span, to Tampa Bay as part of the Evan Longoria trade. Even if he didn’t get dealt, though, Span probably wasn’t going to be holding down the same job this upcoming season because his average offense was negated by horrific defense.

Without him around, the only current Giants outfielder with a Steamer projection greater than 0.0 fWAR is Hunter Pence (1.4).

While San Francisco is retooling for another run at contention after a 98-loss season, they’ve made a couple moves to stay under the luxury tax threshold. In addition to ridding themselves of Span’s contract, they also recently dealt starting pitcher Matt Moore to the Texas Rangers.

So, with a clear need and desire to upgrade their center field situation, Bradley is the perfect combination of effective and cheap ($5.9 million projected 2018 salary through arbitration). The only problem is putting together an attractive prospect package to make a deal, which will be harder after sending three minor leaguers — including Christian Arroyo — to the Rays in exchange for Longoria.

The Rangers appear to be content rolling with Delino DeShields Jr. in center field for 2018, but Bradley would be an upgrade in a number of areas. DeShields did put up decent defensive numbers and even posted an identical wRC+ (90) and fWAR (2.3) to his counterpart, but Bradley brings better defense and more power to a lineup that could use it. This would also help with the potential uncertainty in Texas’ current rotation with Cole Hamels, Mike Minor, Doug Fister, and Moore.

Another team that wants to make a run at October after woefully falling short of expectations in 2017, this potential move would make a lot of sense. There’s always a question of whether they can come up with the prospects, but this could be a situation where the Rangers should be aggressive when thinking about how team defense up the middle impacts a pitching staff.

Sure, the Blue Jays don’t exactly need another center fielder — Kevin Pillar‘s 36 Defensive Runs Saved since the start of 2016 are tops among qualified players at the position. Given JBJ’s attributes, though, why not grab him and amp up the team’s outfield defense that much more?

According to Roster Resource, the two outfielders currently expected to flank Pillar on other side include Teoscar Hernandez (who has just 207 big league plate appearances under his belt) and Steve Pearce (who is a lefty masher that didn’t mash lefties in 2017). For a team in need of more depth, the outfield needs to be addressed.

Like the teams before them, Toronto didn’t live up to the hype in 2017 and is attempting one more shot at October this upcoming year. It’s usually difficult to make a trade within the same division, but crazier things have happened. A move like this would be of the win-now variety while also acquiring a longer-term asset.

Are you an aspiring sports blogger that needs help with starting a blog, developing a content strategy and building a dedicated following on social media? Then check out my ebook, available on Amazon for just $2.99.

The White Sox are knee deep in a total rebuild, so it’s not outrageous to say there’s a hole out in center field that JBJ could fill.

Only the Oakland Athletics (-0.6) had a worse fWAR from their center fielders last year than Chicago (-0.3), but their 64 wRC+ was the worst in baseball. Roster Resource currently has Charlie Tilson slotted into that spot for next year despite just having two big league plate appearances under his belt — both of which came in 2016.

Chicago isn’t planning on legitimately contending in the near future and have also considered dealing Avisail Garcia and Jose Abreu since their team control is running out. This could be that acquisition made now that could impact the next round of competitive teams on the south side.

And even if Bradley gets expensive, the lack of long-term salary commitments leaves general manager Rick Hahn with plenty of payroll flexibility.

It’s unlikely that free agent Lorenzo Cain ends up re-signing with Kansas City unless something unforeseen happens — like his market remaining eerily nonexistent — which leaves a huge hole out in center at Kauffman Stadium. If the Royals don’t make a move to supplement this area of the roster, Paulo Orlando would step into the starting job, per Roster Resource.

Again unless something weird happens and the Royals actually have a shot at bringing back at least a couple players out of Cain, Eric Hosmer, and Mike Moustakas, they won’t be contending this year. They actually seem prepared to potentially sell off some assets in order to get a rebuild started.

But even if the goal is to remake the roster over a short period of time, it won’t be an easy thing to do. Acquiring a player like Bradley doesn’t make a whole lot of sense here, unless the front office wants him to help the current product on the field while eventually flipping him for more players down the road.

The Phillies’ recent signing of Carlos Santana to a three-year, $60 million deal signals that the organization is ready to spend some money and ramp up their rebuild with the 2018 free-agent class on the horizon.

Philadelphia did receive top-half production from the center field position overall this past year, led by Odubel Herrera‘s 100 wRC+, .329 wOBA, and 2.8 fWAR. Although he’s effective and signed to a team-friendly extension for the foreseeable future, grabbing a defender and hitter of Bradley’s caliber can only increase the value of any unit, with this one having Rhys Hoskins and Nick Williams (possibly as part of a platoon) also included.

This seems like the perfect kind of situation. They’re familiar with one another after doing a deal last winter involving Clay Buchholz, while the Phillies feel as though their rebuild is on the verge of finishing. Bradley could easily be a part of two competitive teams in Philly before hitting free agency following the 2020 season.