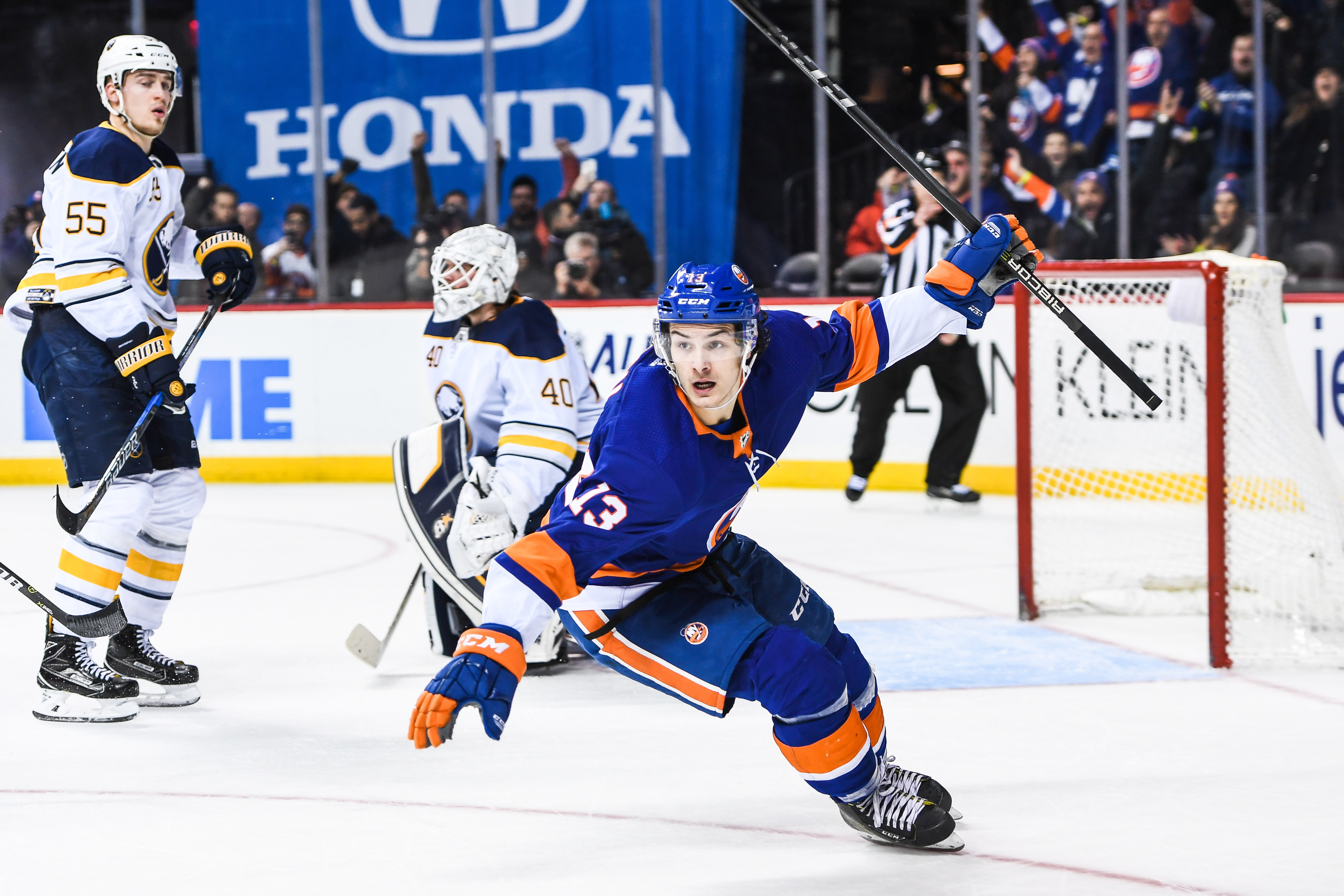 The rookie forward had just stepped onto the ice for his first shift of the extra period when he picked up the puck in the neutral zone and skated into the Buffalo Sabres zone. Barzal took several strides and then fired the puck from the top of the slot past Robin Lehner for the game-winning goal at 1:08 of overtime.

The 3-2 overtime win for the Islanders was their 20th of the season and helped starter Jaroslav Halak picked up his 11th victory in net. Halak made 35 saves in the win for New York.

Chimera’s goal 3:41 into the second period broke a scoreless tie and helped the Islanders take a 1-0 lead. The goal was just Chimera’s second goal of the 2017-18 season.

Girgensons tied the game at one roughly six minutes later after taking a feed from behind the net from Jack Eichel. Buffalo took their first lead of the night at 11:33 of the third period when Kyle Okposo scored his first goal against his former team.

The Islander looked to be all but done late in the third period when Josh Bailey miraculously tied the game with just over a minute left. It was originally ruled a save and play continued until the play was reviewed a half a minute later and ruled to be a goal when video replay showed that Lehner’s glove was over the goal line when he made the save.

1. There aren’t enough words to describe just how good Mathew Barzal has been this season for the Islanders. The rookie forward has been beyond what anyone could have imagined for his first full season in the NHL. Sure, can Barzal continue to grow, but man has he been instrumental in some of the Islanders’ wins this season.

He had a hat trick to enter the NHL’s holiday break and coming out of it he scored the game-winning goal in a game that the Islanders were lucky to escape with two points. Barzal had no hesitation when he entered the Sabres’ zone by himself and his quick shot went right by Lehner.

“He’s a fun player to watch out there,” Casey Cizikas said about Barzal. “When he has that puck and he’s in the offensive zone he’s unbelievable. He’s getting better and better every game. It’s nice to see him succeed.”

2. “The change was great from Johnny and Bails. When he can get a 40, 50-foot gap on the D, it doesn’t really matter. To (Rasmus) Ristolainen’s defense he was out there for a minute and five seconds chasing around Tavares and Bailey and Leddy, so he was at a disadvantage. But (Barzal) can fly and I think he knows he recognizes when guys are gonna have trouble and he takes advantage of those. He skates right at you and he’s pretty deceptive. It’s a good shot.” — Doug Weight on Mathew Barzal’s game-winning goal.

3. It took an extra 30-plus seconds, but Josh Bailey got the tying goal with 1:08 left on the clock. The goal helped extend Bailey’s point streak to nine games, which tied a career high for him, and with John Tavares picking up an assist it extended his point streak to eight games.

“I just saw his glove snap back a little bit, but I still wasn’t sure,” Bailey said about the goal. “Like I said before I would of rather had some clarity rather than having to wait it out like that. But happy the way it worked out.”

Not everyone was thrilled with the way the refs called it in the end. One of those people was Robin Lehner.

Lehner: "Toronto already made up their mind it was a goal, that's how it works in this league, the Bills have that play last game, it's something against Buffalo, it's (BS)" #Sabres

4. Get mad at Jaroslav Halak for the goals he gave up, but the Isles’ starter was a big reason why the Islanders won the game. Halak made several tough saves, including on a late-game power play for Buffalo and an extended length of time in the third period when the Islanders struggled to clear the puck from their own end of the ice.

Halak has played well in his last two outings, finishing Wednesday night with a .946 save percentage along with his 35 saves. The previous game, a win over Winnipeg, Halak made 38 saves and had a .950 save percentage. Halak had a stretch like this early in the month, which was followed by two bad starts in the middle of December, so it’s hard to fully believe Halak is finding the consistency the Islanders need from him.

Still, two good starts in a row are nice to see and deserves its due credit when it happens.

5. “We’re just playing. I know he’s working everyday, both goalies are, and we’re just trying to make it easier for him. Five him predictable shots, let him get set and play his angles and obviously do a good job in front of our net. Taking sticks and bodies away from his crease. Whether that’s him being able to see the puck or second, third opportunities. Trying to do some of that and there are times on our breakdowns where our goalies are really talented and can make some big saves.” — John Tavares on goaltending

6. For all the talk about attendance this season it was nice to see a big crowd on hand for Wednesday’s post-Christmas game.  The official attendance was announced at 15,027, and with most of the arena visibly filled, it’s hard to dispute that number.