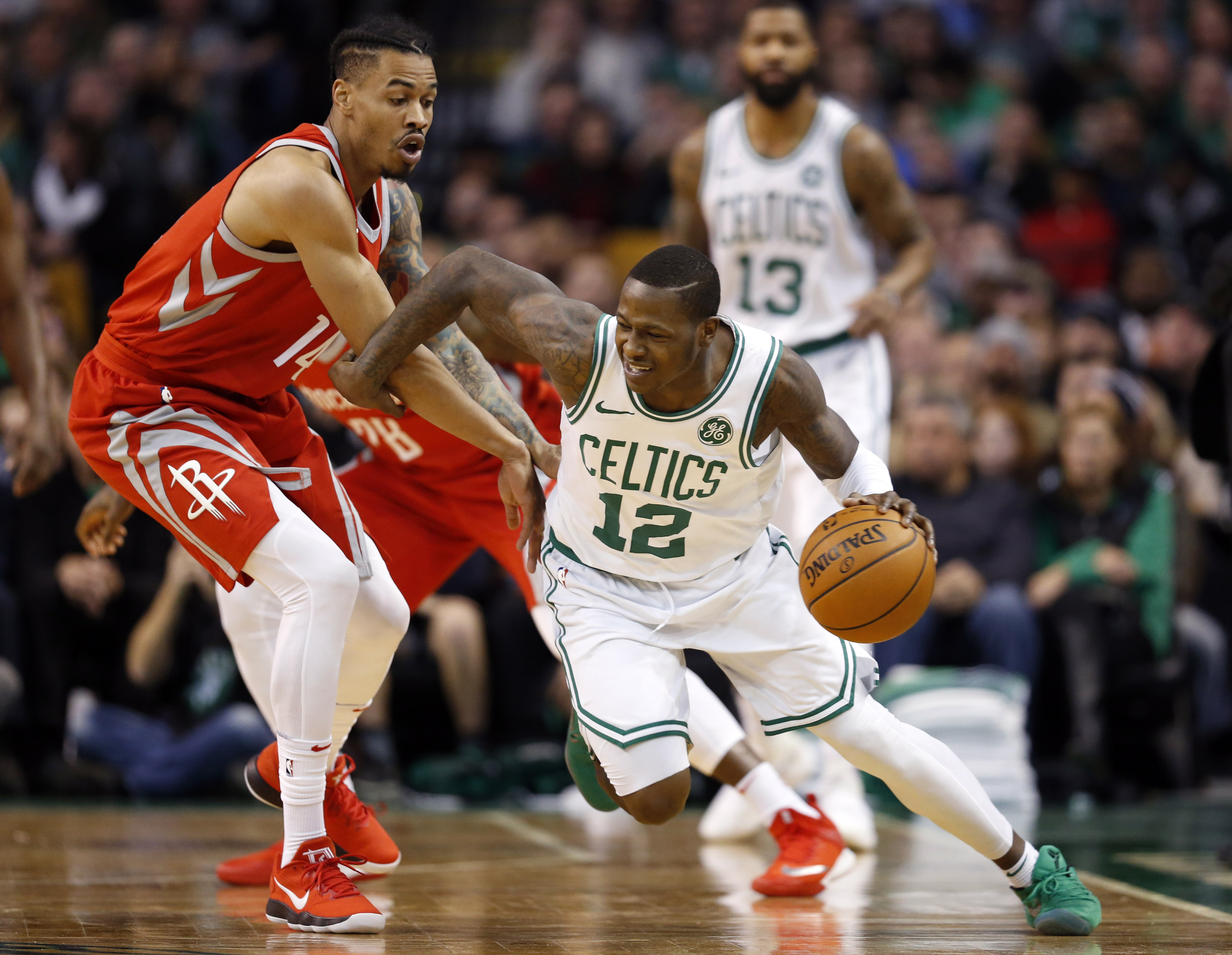 UNBELIEVABLE! In a season already filled to the brim with improbable wins, this one takes the cake.

Boston’s first lead of the game occurred on the final basket, and the comeback from down 26 is the largest in the NBA this season. It truly was the tale of two halves for Boston: after trailing 62-38 at the break, they climbed all the way back to outscore Houston by a total of 61-36 in the second half. The Celtics are now 11-2 against the Western Conference this year. Final Score, 99-98.

Houston started the game as hot as possible, having drilled their first couple of three attempts, and adding an easy three shots made at the rim. The Celtics, conversely, answered by starting the game 0 for 5, complete with terrible decision making that led to early turnovers. The result was a 12-0 start, an early omen, and the exact opposite of what Boston needed to begin the game.

The Celtics eventually went on a run in which they hit 4 of 5, but the damage had been done in the first – Houston (on pace to break the NBA record for 3PM and 3PA in the 2nd straight season) was beginning to warm from deep after hitting 4 of 10; and the best scorer in the NBA, James Harden, was off an running with a quick 10 points. A 14-2 run by Houston ended the quarter with the hideous score of 32-12. Houston’s defense is merely middle of the pack, allowing an average 105 points per game to opposing offenses, but tonight Boston made them look like world beaters during the first half. Nene set the physical tone underneath early, and the Celtics couldn’t get anything to fall from deep. Boston hit just 2 of 7 from deep and shot an abysmal 5 of 19 (26%) from the field overall.

While Boston struggled as a team on the whole, Marcus Morris looked particularly uncomfortable on the court. He consistently mishandled the ball to the tune of 3 turnovers at half and had missed every shot he had taken on top of it (0 for 5). The only Celtics players that seemed to get anything going offensively in the first half was Jayson Tatum (10 points, but mainly from the FT line where he went 6/8) and Kyrie Irving, who’s 9 points in Q2 brought him to 11 total after hitting over half of his shots (5/8) – a respectable stat line, if only his 4 turnovers on the half weren’t included.

The Celtics were struggling in every aspect: shooting the ball (38% from the field at half), passing the ball (just 2 assists at half), rebounding the ball (their first offensive rebound came with seconds left in Q2), dribbling the ball (12 turnovers at half), and the defense was atrocious; even DPOY candidate Al Horford was having lapses on pick-n-roll coverage.  Here’s Jabari Bird’s “welcome to the NBA” moment that left him looking silly, and overall serves as a good representation of the Celtics first half defense.

I swear Harden has some Jedi Mind trick going on with his left to right crossover. Defenders reach in EVERY TIME pic.twitter.com/kr2iSnDhZh

It was ugly as hell. The Rockets, for their part, were sitting pretty and taking advantage- they shot nearly 50% from the field and 2 of their starters nearly outscored the entire Celtics team (Gordon and Harden had 17 each, totaling 34). Boston went into the half with their tails tucked, trailing 62-38.

Then, the comeback was on. Coach Stevens sent a message to his team by rewarding Abdel Nader (5 pts/5 rebs at half) with the starting role in Q3, opting to sit Baynes after a forgettable performance with 0 points and just one rebound through two quarters. The Celtics decided to stop switching Horford onto Harden and locked down their defense in the quarter all around. Jayson Tatum got the first steal, followed by another steal by Irving, and then a Smart block that lead to a 24 second violation by Houston. It was clear momentum was shifting, and once again the defense was the catalyst for Boston.

After the Celtics finished a few shots in transition, Marcus Morris started his road to redemption with a deep ball followed by a jumper, then Kyrie was fouled driving to the line and drilled both. The Celtics defense remained stout during this offensive onslaught, and Boston slowly climbed back into the game on a 20-4 run during Q3. To exactly nobody’s surprise – much of the work during the run was done by Kyrie Irving. He finished with more points in the third (12) than he had scored in the half prior (11) and, crucially, made all 6 of his free throw attempts to this point. The Celtics were in the bonus for over half of the third quarter and their impressive team FT% played a huge role in the comeback. After trailing by as many as 26, Boston now found themselves down just 78-69 heading into the 4th after a Big-Time-Terry three.

The Celtics could smell blood in the water and were circling their prey, they just had to keep the same energy for another 12 minutes. Marcus Smart and the defense did their part, as Houston continued their cold streak into Q4 having now missed 10 of their last 11 shots. Marcus Morris, Terry Rozier, and Kyrie Irving led the way offensively and the Celtics eventually shot their way back to make it a one point game.

Fast forward to Marcus Smart dribbling to the right of the key with 11.6 seconds left- he eventually completed the layup to bring his team within a possession at 96-95. Houston inbounded to James Harden, who was promptly fouled and stretched the Rockets lead to 3 at the free throw line. After the Celtics used their final timeout to bring the ball up to half-court, Smart received the inbound and fed a cutting Jayson Tatum who finished with a dunk – Celtics now trailed 98-97 with 7.3 seconds left.

Here’s where things got interesting: during Houston’s ensuing inbound pass, James Harden pushed off of Marcus Smart in an attempt to get open and was called with the offensive foul. The Celtics didn’t have any timeouts to spare, but luckily the inbound pass was at half-court. Al Horford got open against Black on the low block, received the pass from Rozier and, as time ticked away, backed Black down before he hooked in a 2. The Celtics now had their first and only lead of the game, 99-98, with less than 4 seconds to go. Harden became chippy with Smart under the rim immediately following the lead change and a ref came to separate them quickly. Play resumed, and Houston would have had one final chance with 3.7 seconds left on the clock, but James Harden committed another (much more egregious) offensive foul plowing through Marcus Smart towards the baseline. Here’s a video of Houston’s last minute implosion courtesy of Bleacher Report:

Harden simply lost his cool. The ref was ready for it, blew his whistle, and the Celtics cruised to victory. To say the Celtics stole this one would be an understatement. Final Score- 99-98

This game being called by two refs. Mark Lindsay was unable to go due to a sore back.

The game being played with only 2 refs was insane to me. The NBA knew about this refs back before tip, and Boston is a major city – you’re telling me there isn’t another ref available in greater New England? There’s a reason the NBA changed the rules to make it 3 refs per game- this game got ugly.  Shane Larkin was called for perhaps the worst phantom call I’ve ever seen, when in reality he was the one being torn down. At one point things got so bad even Stevens got a tech. The NBA has egg on their face for this one.

Marcus Smart showcasing the vision hitting the wide open Tatum in the paint and completes the rare scoring play for the Celtics in the first half.

Smart finds Tatum under the basket for two! pic.twitter.com/LbJGIWeJDd

Do your part – RT and help get this man in the All-Star game. Lord knows he deserves it.