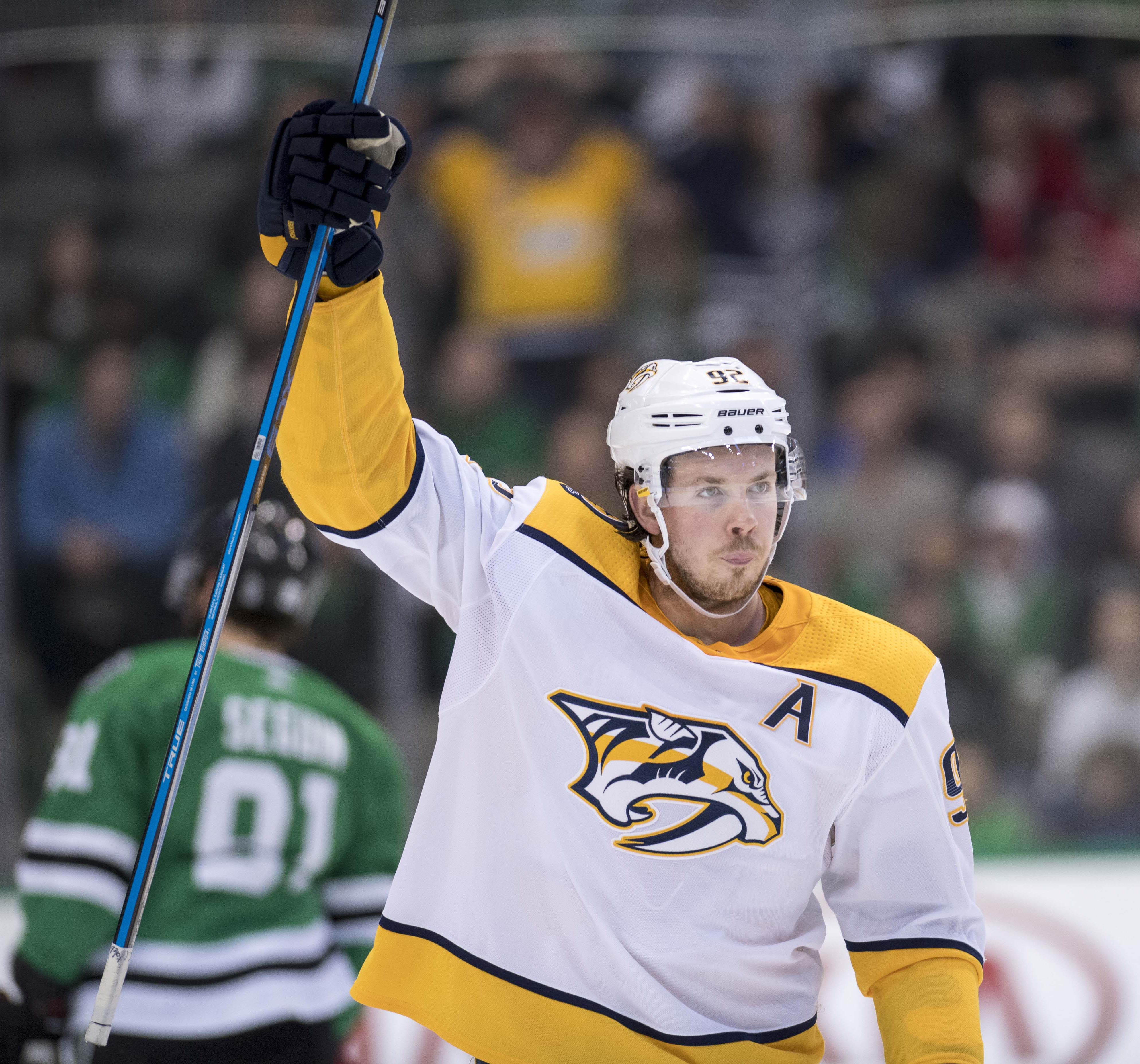 I hope everyone made it home yesterday safely after a light snowfall that seemed to create some surprisingly slippery conditions on the roads.  One team hoping to avoid ‘slipping up’ tonight is the Minnesota Wild as the division leading Nashville Predators come to town.  The Predators have gone 6-2-2 in their last 10 games and seem to be finding their groove that led them to the Stanley Cup finals last season.

Up front Nashville has enviable depth and balance to their Top 9 which will make them tough to match up against the next two nights in this rare home-at-home series.  Currently, the Predators have leading scorer Filip Forsberg playing on a line beside fellow Swedes Calle Jarnkrok and Pontus Aberg.  The Predators turned heads by making the move for Kyle Turris and without question the trade has benefited Nashville the most as he has 17 points in 21 games since arriving in the Music City.  Turris’ arrival has also really sparked a resurgence of scoring from Craig Smith and Kevin Fiala giving Nashville another formidable scoring line.

The Predators also feature plenty of grit and sandpaper with Cody McLeod (who has been in and out of the lineup this season) Austin Watson and veteran Scott Hartnell is back in his second stint with the club after being drafted by Nashville 6th Overall in 2000.  Nick Bonino, a player the Predators signed in free agency over the summer has been an expensive flop with just 1 goal in 25 games at an ugly $4.1 million cap hit.

Nashville’s strength comes from its deep and skilled blueline.  Even with Ryan Ellis out of the lineup with a knee injury, the Predators defense is arguably one of the most well rounded in the NHL.  With skill from Roman Josi and P.K. Subban to physicality from Alexei Emelin to underheralded two-way play from Mattias Ekholm this group can score and defend as well as anyone.  Behind them is one of the best goaltenders of the last decade in Pekka Rinne.  It will be interesting to see whether the Wild and Predators split this back-to-back series between its two goaltenders or whether they simply go with their workhorses as if it was the playoffs.  Backing up Rinne is Juuse Saros who is one of the smallest goaltenders in the NHL, but makes up for it with tremendous quickness and athleticism.

Devan Dubnyk will get the start tonight.  Alex Stalock has been terrific as Dubnyk took time to deal with his lower body injury and I would not be surprised if the Wild chose to split the starts between the two.  If Stalock has proven anything thus far, is that he seems to have the team’s confidence.

Offensively the Wild had a solid performance on Wednesday against Dallas by keeping it simple, forcing rebounds and taking advantage of those 2nd chances.  Minnesota would be wise to try to repeat that approach against Nashville and its super-sized goalie Rinne.  The Wild got some promising news yesterday as Zach Parise played in his first game of the season in a conditioning stint in Iowa where he notched an assist in their 6-3 loss to Rockford.  Parise played over 15 minutes and said he felt a little tired, but overall pretty good which points to a possible return to the big club’s lineup in the first week of January.  You can read about Parise’s game in Iowa here.

The Wild had good energy on Wednesday and they will have to be as good or better tonight against the Predators.  Charlie Coyle, Mikael Granlund, Jason Zucker and Eric Staal led the way for Minnesota up front.  Mikko Koivu did get an assist against the Stars, but they need him to get more involved.  Tyler Ennis is another player that should help put the Predators on their heels a bit and his confidence appears to be growing with each game.  Joel Eriksson Ek has been making great plays the last few games but hasn’t been rewarded with points, but he’s bound to find his way onto the scoresheet sooner rather than later.

Defensively, beyond a few small lapses they’ve been pretty good the last few games as a group.  Jared Spurgeon seems to be sharp and assertive.  Mathew Dumba has provided quality minutes at both ends of the ice and seems to have established some good chemistry along side Ryan Suter.  Nate Prosser gets ripped by the Corsi-loving crowd, but he has really stabilized the bottom pairing and been beneficial to the penalty kill.

So what are the keys for the Wild earning a victory tonight?

What do you think will be important in order for the Wild to earn a victory this evening?  Send us your thoughts on Twitter @CreaseAndAssist or @MNSOTA24 or in the comment section below.

One small programming note, we will not have our normal post-game report as my family is celebrating Christmas this evening.  We hope you understand and that you have fun watching the game tonight!