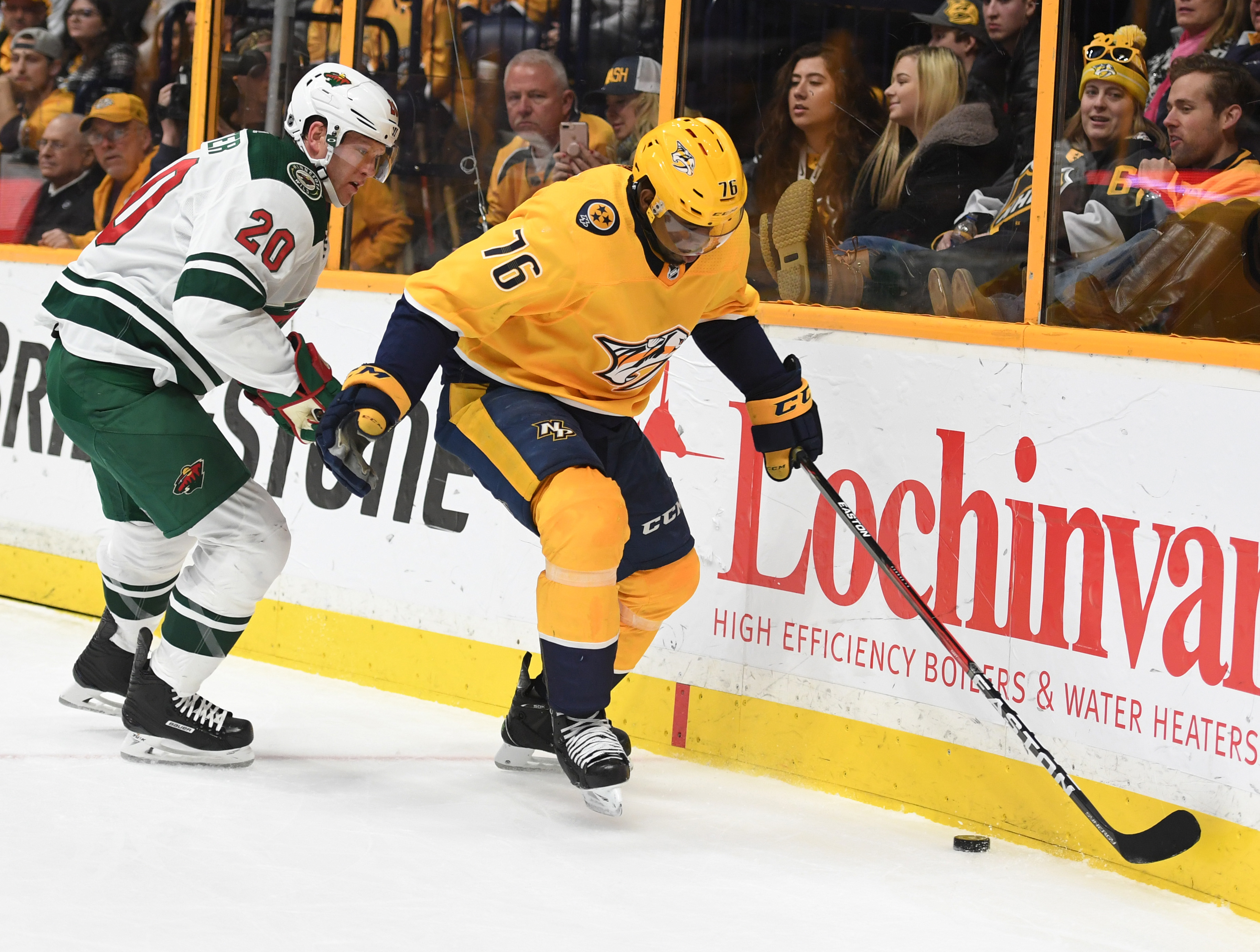 I know I’ve shared this through a few times but I have been visiting with my folks the past week or so.  I finally returned home, holiday gifts in tow and after shoveling some snow came in to put everything away.  Not such a tough job; other than one thing.  A glass and metal shelf from IKEA (called Hindo in case you are curious) awaited construction by me and my wife.  How hard can it be?  Just read the instructions and it basically puts itself together right?  Anyone who has put together anything from IKEA besides Swedish meatballs know that things can go awry pretty quick and one misstep can undo lots of work, such was the case with this shelf.  But after two hours, along with some cursing we got the job done (which at the start looked a bit doubtful).  The Minnesota Wild probably felt the same way going into last night’s game against the 1st place Nashville Predators.

The Predators are potent offensively and strong defensively and they play with the hunger of a team that nearly won it all last season.  Yet the Wild stayed calm and collected and didn’t let that bother them as they withstood over 40+ shots to win 4-2 over Music City.  A little less than 24 hours later the Wild are going to try to do it all over again, but in front of the hostile and rowdy crowd of Bridgestone Arena.  Can the Wild earn another big victory over Nashville?

1st Period Thoughts:  Minnesota started the game with tremendous hustle that was giving the Nashville fits.  The Wild were shadowing the Predators all over the ice, giving them little or no room.  This was personified best by P.K. Subban standing behind his net for about 30 seconds waiting for someone to get open as the Wild mirrored their movement on the breakout giving him no one to pass to.  The Wild did a great job of working pucks deep and putting Nashville on the defensive.  The top line of Mikko Koivu, Mikael Granlund and Jason Zucker were particularly pesky as they worked the cycle and generating a few quick shots that Juuse Saros had to fight off.  The pressure would end up drawing two power plays.  Minnesota did not score on the power plays, but they moved the puck quickly and effectively and generated a number of good shooting opportunities.  Unfortunately that was about as good as it got for Minnesota save one remarkable shift on the penalty kill by Joel Eriksson Ek who deflected away a puck and then skated it down for a nice shot off the rush that was blocked aside by Saros.  The rest of the period was mostly spent with the Wild defending in their own end.  The Wild were doing a good job of working bodies and sticks into shooting lanes and clearing the zone when needed.  Alex Stalock had a few good saves, but the Predators were trying to focus on screens and picking a corner and were not hitting the mark.  Minnesota demonstrated pretty good puck support throughout the period and I thought the Eric Staal, Charlie Coyle and Tyler Ennis line was looking pretty good too.  I was impressed by the Wild’s energy having played the night before and out shooting Nashville 10-8 is a good start in my opinion.

2nd Period Thoughts:  Well to say the game opened up a bit is a bit of an understatement.  Both teams got tired of the tactical defensive battle that marked most of the 1st period and the Wild and Predators would trade chances in what Fox Sports Net North‘s Kevin Gorg would call firewagon hockey.  Both teams were activating their defense and pushing all in off the rush and Saros and Stalock had to have their wits about them as the offensive pressure kicked up two or three notches.  Minnesota had some nice chances offensively, but just couldn’t seem to get one by the athletic Predators goaltender.  Granlund, Ennis, and even Gustav Olofsson (who was stepping up in the play a lot during the 2nd) had some golden opportunities.  The Predators had their fair share of quality chances, mostly on the power play as they drew 3 Wild penalties in the period.  Luckily for the Wild, they saved some of their best play for the penalty kill but it was not without its own tense moments as Minnesota got lucky on a few dangerous clearing attempts off the glass that nearly went out of play which would’ve put them on the bad end of a 5-on-3.  The Wild’s defenseman were doing a great job of stripping pucks and stepping up at the right times and then working the puck out of the zone to keep their attack going as Minnesota tried to catch the Predators in transition.  I thought the Wild were getting closer to breaking the stalemate, but they’ll have to dig deep in the 3rd period and stay out of the penalty box more than they did in the 2nd.

3rd Period Thoughts:  The Wild seemed to run out of gas in the 3rd period.  The Predators would take the lead early in the period as they went on the attack against Minnesota’s 4th line and a wide shot by Nick Bonino was swept up by Scott Hartnell who wrapped it just inside the right post to give Nashville a 1-0 lead.  Stalock did his best to sprawl across but was just a half second too late.  You could sense a bubble sort of burst with Nashville’s goal and the Wild were on their heels for most of the rest of the period.  Beyond one power play the Wild just didn’t have the legs to get free of the Predators or the energy to put shots on goal to really test Saros and the Predators in the closing minutes.  Nashville would add another on the power play as Subban blasted a slap shot that hit the stick of Zack Mitchell and then skittered off the ice and by Stalock.  2-0 Predators.  Minnesota tried juggling lines in search of some kind of spark but there was none to be had.  Viktor Arvidsson would add an empty netter and seal a 3-0 victory.

Alex Stalock was really pretty solid, stopping 26 shots in the loss.  Neither goal was the result of poor play on his part.  In fact, with the Wild’s energy fading it was Stalock that tried to spark his club with a long outlet pass that nearly led to a goal from Minnesota’s top line.  Defensively the Wild really didn’t too bad at clearing away 2nd chance opportunities and being relatively solid at helping their goalie by blocking shots and disrupting passes.  The penalty kill gave up one, but overall kept the Wild in the game far longer than it probably deserved to be.

Offensively the Wild seemed to just run out of gas.  The Wild were not able to generate almost any quality chances in the 3rd period beyond a few desperate shots from the perimeter and that was the difference.  Minnesota had some quality chances; and Tyler Ennis had some great set ups but the Wild couldn’t bury one by Saros.  The power play had good puck movement at first but they seemed to try to get fancy at the worst possible time instead of keeping it simple and sending pucks on goal and hoping for the best.

Tyler Ennis was right in his post-game interview as the team put itself on the penalty kill far too often.  The penalties helped wear the team down and that was a big reason why the Wild started to fade down the stretch.  A lot of people are agonizing over the 3rd period collapses, but a large part of that is the team is exhausted from playing a man down and using many of its top players to try and kill those penalties.  The Wild are their own worst enemy and until they figure that out it will continue to haunt us.

RW – Dmitry Sokolov (Russia, WJC’s) ~ the skilled Russian scorer is playing on the 3rd line and while he isn’t pulling the trigger quite as often he’s still finding his way onto the scoresheet as he chipped in two assists (2 shots on goal) in their 5-2 win over Switzerland on Thursday.  He then had 3 more shots on goal but finished a -1 in Russia’s 5-2 win over regional rival Belarus.  Sokolov has just 2 helpers, 8 shots on goal, and is an ‘even’ rating through 3 games.

LW – Nick Swaney (Minnesota-Duluth) ~ playing on the Bulldogs top line, the former Lakeville South star made an impact offensively with 2 helpers (1 shot on goal) as Minnesota-Duluth dominated Yale 5-0 on Friday night.  Swaney has 3 goals, 11 points, 2 PIM’s and is a +4 in 14 games.

RW – Brandon Duhaime (Providence, H-East) ~ the skilled winger played on the Friars’ top line on Friday night where he registered an assist in their 6-0 thrashing of Arizona State.  He followed up that effort with anther assst in a 3-0 win over Robert Morris.  Duhame has 3 goals 11 points, 37 PIM’s and is a +5 in 20 games.

D – Jack Sadek (Minnesota, Big 10) ~ the Lakeville North star doesn’t normally find his way onto the scoresheet that often but he had a goal and an assist on Friday to help propel Minnesota to 3-0 over Army on Friday.  Sadek has 2 goals, 6 points, 26 PIM’s and is a +3 in 21 games.