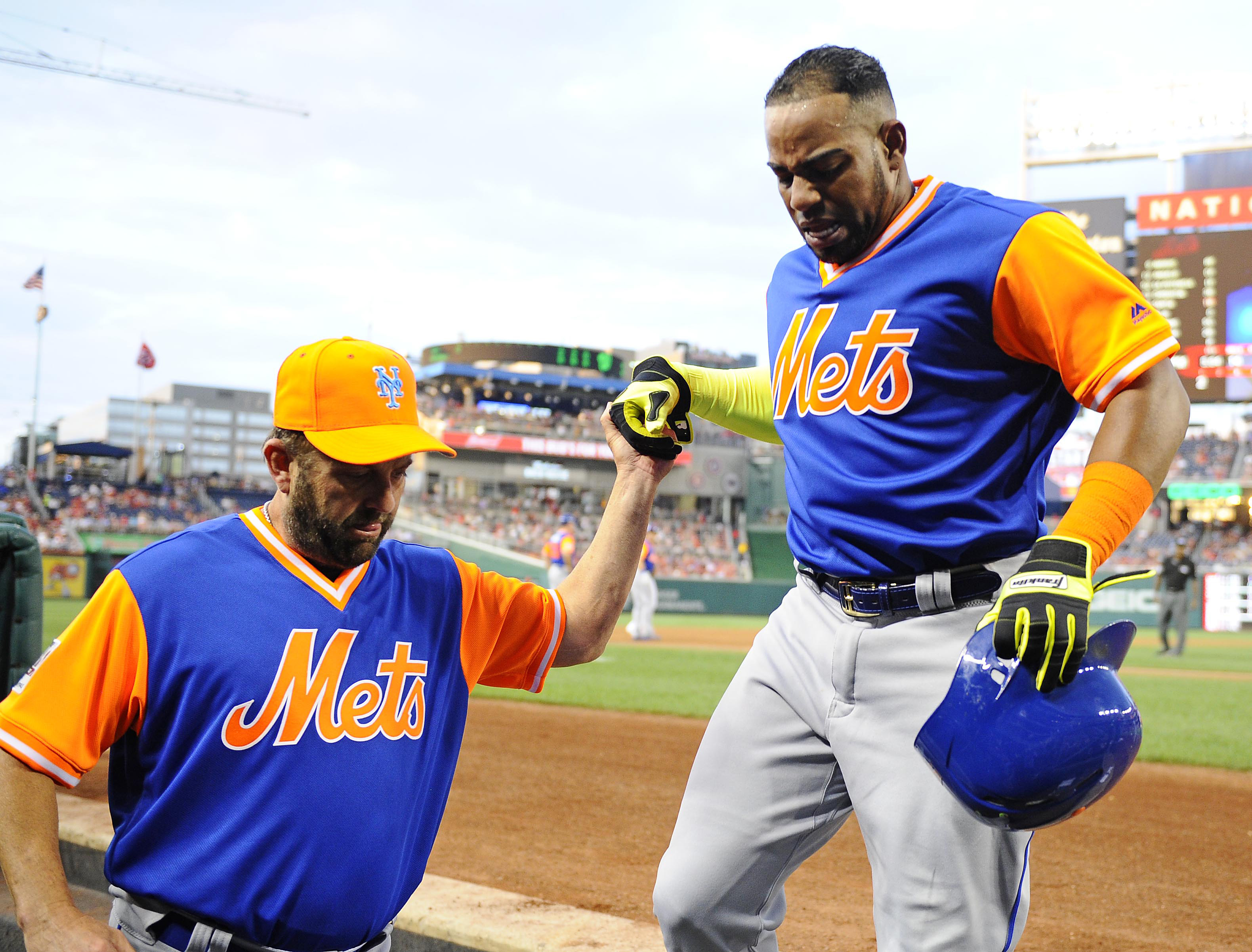 2017 comes to an end today, and the New York Mets will be happy to put it into the history books. The year was a complete disaster for the Mets, who went from opening the season with a World Series contender to finishing it an afterthought in their own city. Let’s take a stroll down memory lane to look back at some of the big stories surrounding the Mets over the past 365 days:

2/9/17: Jerry Blevins re-signed with the Mets on a one year deal with a team option for a second year. When this is one of the big positives for the year, that’s a sign things didn’t go as planned.

3/22/17: Seth Lugo starts for Team Puerto Rico in the finals of the World Baseball Classic. The United States team breaks through against Lugo, who had dominated for the entire tournament, to clinch their first ever WBC title. Less than a week later Lugo would be diagnosed with a partial UCL tear that would sideline him until mid-June.

3/25/17: The Mets win a 3-0 exhibition game against the Atlanta Braves, but outfielder Juan Lagares suffers an oblique strain during the contest. The injury will force Lagares to open the year on the disabled list, opening a spot on the Opening Day roster for Michael Conforto.

4/3/17: The Mets pick up a 6-0 win over the Braves on Opening Day as Noah Syndergaard tosses six shutout innings, but doesn’t factor in the decision. Lucas Duda picked up a bases clearing double in the seventh inning to blow the game open.

4/27/17: After struggling through the opening weeks of the season, the Mets needed a win in a matinee affair with the Braves to secure a series split. The game was a disaster as the Mets lost 7-5 after Matt Harvey threw up a stinker in an emergency start after Syndergaard was scratched. To make matters worse, Yoenis Cespedes re-injured his hamstring after the Mets attempted to have him avoid the DL by resting for five games. Cespedes would be sidelined for the next six weeks.

4/30/17: Even though we didn’t know it then, the Mets’ season was about to end after just one month. The Washington Nationals bludgeoned the Mets 23-5, but the story of the day was another injury. Syndergaard, who was pitching days after refusing an MRI on his elbow after skipping a start, lasted only 1.1 innings before leaving with a partial lat tear. That injury sidelined Syndergaard until late September, delivering a fatal blow to the Mets’ season.

5/7/17: Shortly before he was scheduled to start against the Miami Marlins, the Mets suspend Matt Harvey for three days for a violation of team rules. Harvey didn’t show up to the ballpark the day before and failed to notify the team of his absence in a timely fashion. It turned out that Harvey was out partying the night before and was too sick to show up, but it was the first ugly incident in what would be another lost year for the Mets’ former ace.

5/12/17: After the Mets failed to complete a needed sweep of the San Francisco Giants, they received another body blow on the injury front. Closer Jeurys Familia landed on the DL with a blood clot in his pitching shoulder. The injury would sideline him until late August.

6/22/17: The Mets fall 6-3 to the Los Angeles Dodgers to complete a 1-7 stretch against the National League’s two best teams. This stretch of games was the Mets’ last real chance to build off the momentum from the returns of Lugo, Steven Matz, and Cespedes from the DL. The Mets fell to ten games below .500 with the defeat.

6/23/17: Asdrubal Cabrera returns from the disabled list and is shifted to second base in order to put Jose Reyes back at shortstop. The decision ticks off Cabrera, who vents to reporters at his locker after a game with the Giants and demands a trade. Cabrera eventually rescinds his request and settles in at third, leading the Mets to pick up his 2018 option at the end of the season.

7/11/17: Michael Conforto represents the Mets at the All Star Game in Miami and even had a chance to win the game for the National League in the ninth inning. In typical Mets’ 2017 fashion, Conforto struck out and the NL would go on to lose in extra innings.

7/27/17: After declaring themselves open for business after the All Star Break, the Mets begin their veteran purge by dealing first baseman Lucas Duda to the Tampa Bay Rays. The deal nets the Mets minor league reliever Drew Smith while Tampa picks up the remainder of Duda’s salary (this will become a theme).

7/28/17: In a surprising move, the Mets trade two prospects to the Marlins for closer A.J. Ramos. Ramos, who is under team control through 2018, was acquired to help fill in for when . . .

7/31/17: The Mets deal their best asset, trading Addison Reed to the Boston Red Sox for three minor league relievers. The Red Sox picked up the remainder of Reed’s salary in the trade.

8/1/17: After a (far too) long wait, the Mets promote Amed Rosario to the majors to make his big league debut. Rosario went 1 for 4 on the day and batted .248 with four homers, 10 RBI’s, and seven stolen bases in his first taste of big league action.

8/9/17: The Mets continue dumping their veterans, completing a controversial trade with the Cleveland Indians to send them Jay Bruce. The return is minor league reliever Ryder Ryan, who carries an ERA of almost five at the time of the deal, and the remainder of Bruce’s salary being paid by Cleveland. The trade is roundly panned by the New York media, especially once word leaks that the New York Yankees (and their elite farm system) were also interested in Bruce.

8/11/17: A few days after the dust settles from the Bruce trade, the Mets promote first baseman Dominic Smith to the major leagues. Smith picks up a hit in his debut but has a rough transition to the majors, batting .198 in 49 games and struggling to field his position.

8/24/17: The Mets’ season, which was already over, becomes nearly unwatchable after Michael Conforto suffers a brutal shoulder injury during a game with the Arizona Diamondbacks. Conforto dislocated his shoulder and tore a capsule while swinging at a Robbie Ray fastball, an injury that sidelined him for the rest of the season and may keep him on the shelf to begin 2018. A day later, Yoenis Cespedes injured his other hamstring and is ruled out for the rest of the season.

9/2/17: Matt Harvey comes back from the disabled list and gets rocked by the Houston Astros, giving up seven runs in two innings in a 12-8 loss. This is the beginning of a miserable final month for Harvey, who goes 1-4 with an 11.28 ERA in September.

9/23/17: A rare silver lining in the dark cloud of 2017 emerges as Noah Syndergaard returns from his lat injury. Syndergaard tosses a scoreless inning against the Washington Nationals and made another cameo on the season’s final day to set himself up for 2018.

10/1/17: After a few days of anonymous articles bashing Terry Collins, the Mets’ skipper resigns at the end of the lost season. Collins accepts a role in the front office a few days later, where he will serve as a special assistant to General Manager Sandy Alderson.

10/23/17: The Mets hire Indians’ pitching coach Mickey Callaway as their new manager. The choice draws rave reviews as many critics applaud the Mets for an inspired choice.

12/15/17: The Mets finally join the offseason when they sign reliever Anthony Swarzak to a two year deal several days after Alderson said he didn’t want to jump into the “inferno” of a relief market.

12/16/17: Newsday’s Marc Carig puts ownership on blast by shining a light on their hesitance to inform the front office of how much money they are willing to spend. This starts a series of articles by local beat writers that are critical of the Wilpons.

12/22/17: Perhaps in an effort to take some attention off of the payroll articles, the Mets bring back former GM Omar Minaya to serve as a special assistant to Alderson. The move was reportedly ordered by Fred Wilpon against the wishes of the entire front office.