Your Afternoon Dump... Where The Celtics Finish 2017 with 30 Wins 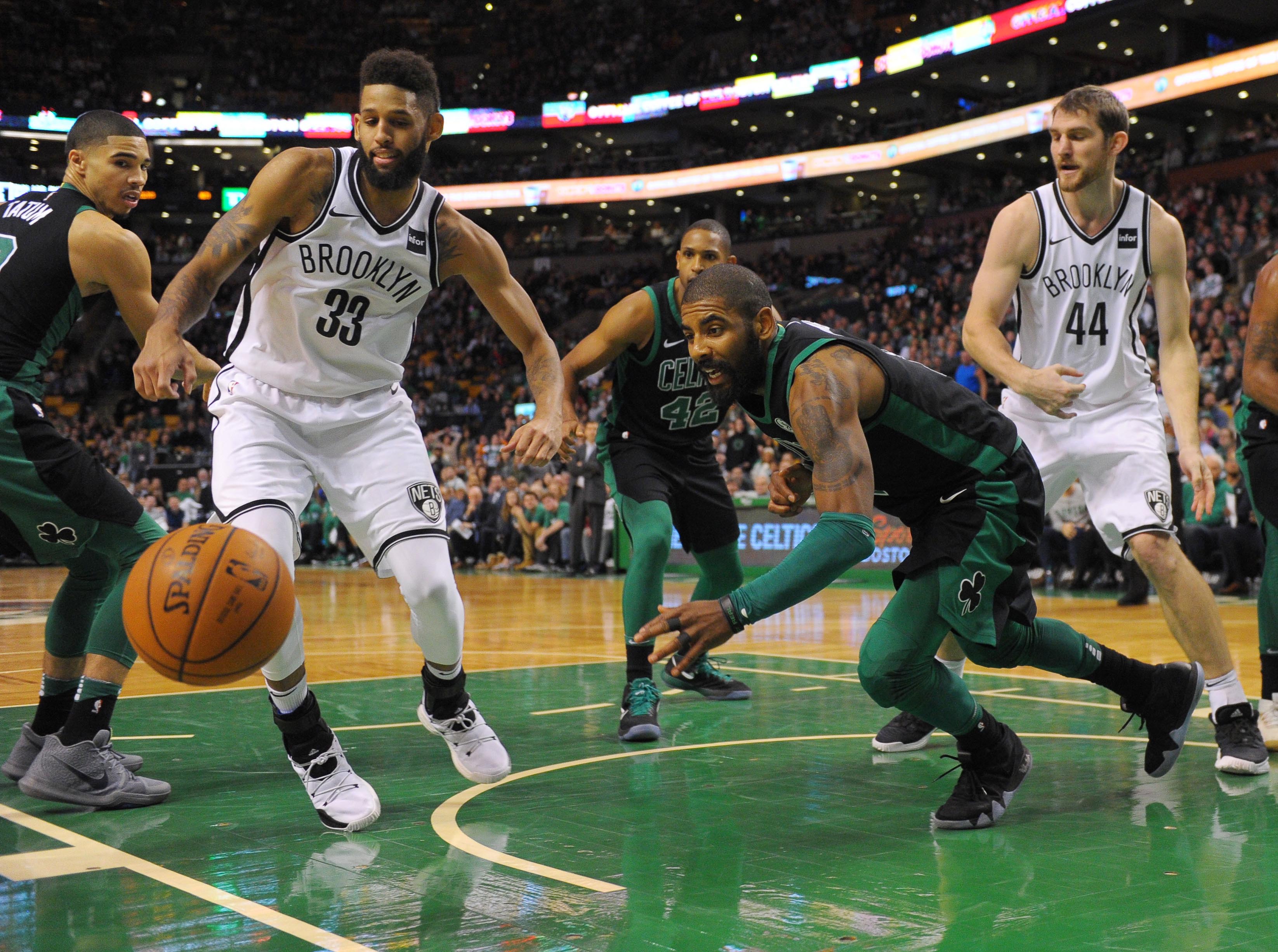 Your Afternoon Dump... Where The Celtics Finish 2017 with 30 Wins

Boston ends the year with the second-best record in the NBA at 30-10 and with a three-game lead on the Toronto Raptors for the top mark in the Eastern Conference. The Cleveland Cavaliers, due in town on Wednesday, are four back in the East as they await the return of Isaiah Thomas as early as this week.

The Nets got two back from Spencer Dinwiddie at the line, then Jayson Tatum made one of two free throws to make it 103-93 with 3:18 to go. Rondae Hollis-Jefferson then came back with five in a row for a five-point game with 2:05 left.

Irving got the line to extend the lead to 105-98 when Dinwiddie answered with a drive with 1:34 remaining. Quincy Acy’s third-chance 3-pointer brought the Nets within two with 15.2 seconds left when Smart was fouled and hit one free throw for a 106-103 game with 14.5 on the clock.

The Nets missed their shot at the tie, Irving hit two free throws for a five-point game, and the Nets burned nearly all of the remaining 7.7 seconds getting off a final shot.

The Celtics closed out 2017 with a 108-105 win against the Brooklyn Nets. Kyrie Irving led the team with 28 points, Al Horford added 10 points and 10 rebounds, while Terry Rozier contributed 14 points and 7 rebounds off the bench.

In the first half, Boston shot 60 percent and grabbed 26 rebounds to Brooklyn’s 14. Regardless, Brad Stevens was dissatisfied with the team’s effort.

Brad Stevens just told his guys, "You're playing soft as hell," shortly before the first half came to an end.

The Celtics overwhelmingly had the talent advantage, but the scrappy Nets kept the game in reach. Without D’Angelo Russell and Jeremy Lin, they barely have any starting caliber players. They consist of 6th, 7th, and 8th men who play fast, never let up on defense, and follow the lead of their excellent coaching staff.

They remind me of the Celtics from two or three years ago. GM Sean Marks has done an admirable job building this roster with limited resources. Since Danny Ainge fleeced them in 2013, they haven’t owned their first-round picks, leaving the new front office in an impossible situation to improve their team.

The Celtics were up by double digits for most of the second half, but the Nets crept back in the final five minutes, forcing the C’s to hit free throws to close out the game. Marcus Morris had another solid performance, playing 17 minutes, scoring 15 points shooting 4/5 from three, and posting a team high +12.

The Celtics forward came off the bench with 15 points in a 108-105 win against the Brooklyn Nets, including a 4-for-5 performance from downtown. His 10-point performance in Thursday night’s win over Houston included, Morris shot 6-for-9 from downtown in his last two games.

With the exception of a rough first half against the Houston Rockets, Morris has shown why he’s considered so important to the offensive fortunes of the Celtics reserves.

“He’s obviously got a good rhythm that he carried over from the second half the other day, and did a lot of good things,” said coach Brad Stevens. “He’s really important, and, you know, we’re still managing minutes and will be for a while, but he’s a big part of what we’re trying to accomplish. And we need him to score the ball, and he did a great job tonight.”

While he’s playing sparingly amidst a knee injury, Morris has performed well in two consecutive games. Yes, he sucked in the first half against the Rockets, but he redeemed himself with good shooting and defense later in the game.

The limited training camp, recurring injuries, and rise of Jayson Tatum has led to an overall blah season for Morris. In 18 games, he’s averaging 11 points, shooting 40 percent from the field and 33 percent from three. But he does show promise, and the second half of the season should bring out the best of Morris.

He’s playing nearly all his minutes at power forward after playing two seasons exclusively at small forward. We know he’s a great 1-on-1 scorer, a solid spot-up shooter, and a versatile defender. He’s also grabbing a respectable 22 percent of available defensive rebounds, a huge improvement from his Detroit and Phoenix years.

Stevens acknowledged that it’s a difficult situation for Morris, with his injuries and inconsistent playing time. Although he’s not a long-term piece, we should expect an uptick in production through the second half of the season, and with his skill-set, he’ll have some big moments in the playoffs.

“I would say the ball swings from side to side more,” Brooklyn Coach Kenny Atkinson said. “I haven’t watched a ton of them, but I think a lot of guys are touching it. It’s moving side to side. You know, Al [Horford] has a big part. I think he has a big effect on ball movement. Like, his passing, his ability to spread the defense, and then he quarterbacks up there. It seems like he’s more high-usage. He has the ball in his hands more, which is a good thing. He knows how to distribute, he knows how to get guys shots. He’s got all the tricks of the trade as a vet in this league. So that’s been a big difference, too. It seems like he’s touching it more.”

But Atkinson said that was not an indictment on Thomas, because the Celtics’ offense was quite dangerous last year, too.

“Listen, they were a tough guard with Isaiah,” he said. “When you went into a game you were very aware. So now I do think they’ve added some excellent players. Like, [Jayson] Tatum is a big-time player already. It’s a different group at the end of the day. Maybe that’s why it’s spreading around a little more — more talent.”

It’s easy to forget that the offense has undergone a dramatic transformation since last season. Kenny Atkinson’s comments help put that in perspective.

This year’s offense emphasizes more side-to-side movement, and Kyrie allows each offensive set to develop, as opposed to his Cleveland days when he always tried to score. Al Horford acts as the high-post quarterback, and he’s playing with an increased comfort during his second year in Boston.

Through 40 games, Brad Stevens must be pleased with their offensive development. They play 10 deep, everyone touches the ball, any guy can initiate the offense, and they play 4-out with every lineup.

Last year, they had a top-5 offense, but it was all predicated on the performance of Isaiah Thomas. More often than not, he delivered, usually in spectacular fashion. He was the only 1-on-1 creator on the roster, and the Celtics needed him to carry the offense.

With the additions of Tatum, Morris, and Irving, along with the development of Brown and Rozier, the Celtics have several guys who can make plays and score for themselves. Last season, Gerald Green was probably the best 1-on-1 player outside of Isaiah.

We’re roughly a year removed from Isaiah’s 52 point performance against the Miami Heat. That was the first game Isaiah received “MVP” chants, the first of several amazing performances, and the “King of the 4th” soon came to life.

After the Nets game, Kyrie had some nice words for Boston’s former point guard:

“That guy put on some performances, epic performances,” Irving said. “And, for the city of Boston, what he gave on a consistent basis, you were just wondering how that tough-nosed m—–f—– was just getting it done every single night and demanding from his teammates and playing with an edge that really cemented himself as a premier player in this league.

“And you’re just nothing short of happy for a guy like that. And whether or not he plays, it’s going to be nothing but love for him from Boston.”

Isaiah still hasn’t returned from the hip injury. The Cavs play in Boston on Wednesday, but he’s not planning to dress for that game.

Some C’s fans were mad at Isaiah’s recent comments to the media, specifically, how he said the Celtics training staff wasn’t totally transparent about his hip injury, and if he could do it again, he would sit out the entire 2017 playoffs.

There’s no reason to knock the guy for answering a question honestly. He has the right to feel betrayed, and clearly, he’s hasn’t fully gotten over the move. He had an MVP caliber season, played the day after his sister died, played through a hip injury, recruited Horford and Hayward, carried himself with the ultimate swagger, and always talked about how he loved the city of Boston. I don’t blame the guy for still feeling upset.

He hasn’t said anything bad about the city, organization, former players, or fans. Danny Ainge is the only guy he’s upset at. When the media asks him questions about the trade, he answers them honestly, and with an edge. It’s Isaiah being Isaiah. Boston fell in love with his personality, and it’s not gonna change now that he’s in Cleveland.

Nevertheless, Celtics Nation has transitioned nicely to the Kyrie Irving era. When he returns to Boston, we should expect an epic video tribute.

And Finally… BREAKING: Gordon Hayward Will Return Stronger than Ever

GORDAN HAYWARD HAS "THE BASEDGODS" BLESSINGS FOR HIS HEALTH HE WILL BE BACK SOON STRONGER AND MORE POSITIVE THEN EVER GO BOSTON! ALSO WHO IS WATCHING THE SIXERS PLAY RIGHT NOW AGINST NUGGETS? ALSO WARRIORS ARE PLAYING LIVE RIGHT NOW TO!!! GO WARRIORS AND SIXERS – Lil B

Yup, no need to worry about Hayward’s injury. Vegas has updated the Celtics championship odds accordingly.

Boston Herald: C’s Resolve to Get Some Rest | Bulpett: Times Have Changed for the Nets

Boston.com: 17 Things that Happened in Boston Sports in 2017

NBC Sports: Stevens Hopes to Find Rhythm for Morris | Kyrie: Isaiah will Get Nothing But Love (video)| Blakely: I think Isaiah Returns on Wednesday (video) | C’s Getting Healthier