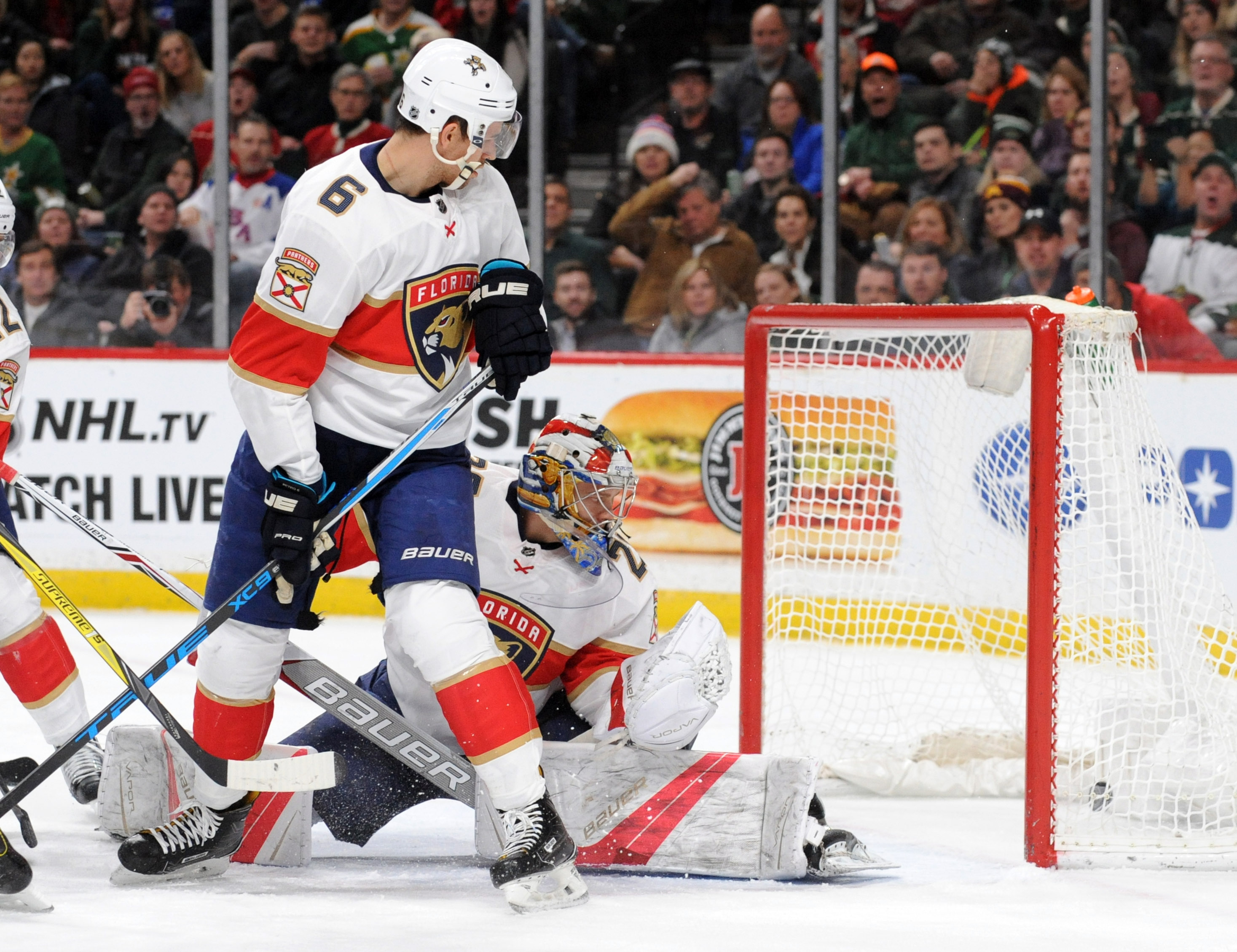 Another trip around the Sun is complete and the New Year’s Resolutions are in, the champagne has been served and a new year has begun.  Its going to be so much different in 2018 than it was in 2017 right?  Well, maybe not.  Towards the end of 2017, the Wild sleepwalked their way to a loss against the Florida Panthers.  Minnesota now has a chance to rectify that loss with an opportunity against the Panthers tonight.

The Panthers are coming off a win over the Montreal Canadiens on Saturday night.  Florida will hope to sweep the season series and one would think the Wild would not overlook them as they did last time.  Minnesota wants to start the new year on a positive note, or will 2018 feel a lot like 2017?

1st Period Thoughts:  The period did not start out that well for the Minnesota Wild.  The Wild didn’t look lethargic as much as they looked disconnected and unfocused.  With Zach Parise‘s long-awaited return to the lineup the Wild spent lots of time trying to set up the alternated captain with shot opportunities.  In fact, deciding to shoot the puck was a major issue early on.  The Wild didn’t seem to want to pull the trigger.  The Panthers would get tagged for a penalty early as Alexander Barkov tried following up a shot and making contact with Devan Dubnyk in the process.  Dubnyk did his best to ‘sell’ the contact by throwing his head back and flailing a bit as he fell to the ice.  The officials bought the flop and Minnesota went on the man advantage.  Unfortunately the Wild didn’t seem to be too interested in shooting the puck.  Even on clean zone entries where the Wild dropped a pass back to an open player, the overly unselfish play led to easy turnovers for the Panthers penalty killers who just waited for Minnesota to make an ill-advised pass.  As the penalty expired the Panthers went on the attack and worked a puck up to Barkov who was just leaving the box and the power forward held off Jared Spurgeon as he charged toward the Wild goal where he swung a backhand shot that was fought off by Dubnyk.  Less than a minute after this shot, Michael Haley would light up Gustav Olofsson with a big hit that sent the 6’3″ and very thin defender falling onto his backside.  Marcus Foligno did not hesitate and challenged Haley who dropped the gloves immediately.  Foligno did his best to keep Haley at a distance as the two pugilists circled only throwing a few punches before the officials and sellout crowd got bored with the dance and skated in to break it up.  I wouldn’t say the game turned after this fight, but Minnesota seemed to be a little more focused in their attack and started to send more pucks at James Reimer.  The Wild would finally cash in as Spurgeon stepped into a slapper from the point that drew a rebound from Reimer and Matt Cullen was able to sweep in a shot from his knees.  Reimer pleaded for goaltender interference to no avail and the Wild would take a 1-0 lead.  The goal seemed to get Minnesota’s legs going more and the modified top line of Mikko Koivu, Mikael Granlund and Joel Eriksson Ek came close to cashing in as Eriksson Ek redirected a Ryan Suter point shot.  A few minutes later Parise was denied on a chance in close and the period would end with Minnesota holding the lead and having out shot the Panthers 13-7.  A reasonable 1st period, but they can’t fool themselves into thinking one goal will get the job done tonight.

2nd Period Thoughts:  The Wild would get to work right away to start the 2nd and they would cash in less than two minutes in as Gustav Olofsson fired a shot from the point that was deflected by Marcus Foligno and then redirected once more by Cullen to give Minnesota a 2-0 lead.  Minnesota continued to apply pressure and it appeared they got another goal as a point shot by Spurgeon was directed off the knee of Granlund and by Reimer.  The goal would be reviewed initially to see if Granlund kicked it in.  On the replay, Granlund extended his leg towards the puck but not in a kicking motion and thus the goal would stand.  But Florida would then challenge that the play was offsides and upon review it was Eriksson Ek who had his skate up just a tad bit early and the goal was waived off.  It was the correct call even though the sellout crowd was annoyed at the double-review and the good goal-no goal result.  Minnesota did not let up and they kept swarming in the Florida zone who seemed to be in fetal position as the Wild were causing the Panthers all kinds of havoc.  A scary moment towards the second half of the period as Aaron Ekblad shoved Granlund into Reimer who got the worst of the collision that caused his head to jar back.  The Florida Panthers training staff would take a look at Reimer and escort him to the locker room, so that meant they had to send Harri Sateri out for his first NHL action.  The Wild went back on the attack and they’d light the lamp as Tyler Ennis dished the puck out to the  point for Spurgeon to rip on goal that drew a rebound from Sateri that was pounced on by Eric Staal and it was 3-0 Wild.  The Panthers had seen enough and they’d swap out Sateri for Reimer who looked a bit sore and maybe even a bit groggy going back to the Florida crease.  Minnesota did not go easy on him either as they’d again swarm in the offensive zone and it was Staal again going top shelf after a nice pass by Ennis.  4-0 Wild as they were feeling confident going into the 2nd intermission having out shot the Panthers 19 to 2.

3rd Period Thoughts:  The 3rd period was mostly frustrating, as the Wild took their foot off the gas and Florida would dominate most of the play.  Florida even did the Wild a favor and put Sateri back in net to give Reimer a rest, yet one would hardly know it for all of the time the Wild spent in their own zone.  The Panthers top line of Jonathan Huberdeau, Vincent Trocheck and Barkov would swarm all over Minnesota’s end and they’d cut into the Wild’s lead as Trocheck fed Huberdeau for an easy tap in goal.  4-1 Wild.  The next few minutes the Wild spent their time defending in their own zone on what looked like an extended Panthers’ power play.  The Panthers were getting bolder with every minute and Dubnyk was being forced to come up with some big saves to keep Minnesota’s 3-goal lead intact.  Later in the period the Panthers would receiver a power play with a little under 7 minutes left seemed to give Florida a chance to claw back into this game.  Fortunately the Wild’s penalty kill had good active sticks and they were able to get bodies into shooting lanes to give Florida no clean looks at the net.  The Wild would seal the deal on an empty net goal from Charlie Coyle as they’d skated away with a 5-1 victory.

Devan Dubnyk was pretty solid making 25 shots in the victory.  He didn’t have much activity throughout the 1st half of the game but he made some big stops at key times to prevent the Panthers from building any momentum offensively.  I thought Spurgeon and Jonas Brodin had a terrific game this evening defensively.  The penalty kill only had a few chances but they never let Florida believe they had a chance and that helped crush their hopes.

Offensively the 4th line got things rolling with two goals from Matt Cullen.  Its been a tough year for Cullen and I’m sure it felt good to bury the game winner this evening.  Eric Staal helped the Wild pull away to make this game a route in the 2nd period.  The line of Jason Zucker, Staal and Ennis were solid.  Ennis is playing better and better and he had helpers tonight.  I thought the line of Koivu, Granlund and Eriksson Ek started to exhibit more chemistry as the game went on.

This was an important win for the Wild who are coming off a disappointing loss on Saturday against the Predators.  The team avoided the stupid penalties which plagued them against Nashville.  Minnesota was sending lots of shots on goal and swarming near the crease and eventually they were rewarded for their persistence.  Sure, having Parise back helps round out the lines but the overall approach was much improved this evening.  Nice win and now they need to follow it up against Buffalo on Thursday.

Rockford would jump out to an early lead as Matheson Iacopelli lit the lamp after a nice pass by Laurent Dauphin.  Iowa would answer back on the power play as Justin Kloos‘ quick shot drew a rebound from Collin Delia that Mario Lucia pounced on tying the game at 1-1 going into the 1st intermission.  Iowa would then take the lead early in the 2nd as Luke Kunin ripped a shot by Delia and the Wild were feeling confident.  That confidence would grow a few minutes later as Lucia sniped another shot off a nice set up by Cal O’Reilly.  Iowa would add another just 2 minutes later as Landon Ferraro buried his 4th goal of the season to give the Wild a 4-1 lead going into the 3rd.  Rockford would rally back with two goals in the 3rd to put a bit of a scare into the Wild as Tanner Kero and Tyler Sikura found the back of the net.  Yet Iowa would seal the deal on a shorthanded empty net goal by Kyle Rau to come away with a 5-3 victory.  The real story of the game was Steve Michalek who consistently shut the door on the Ice Hogs most of the game as he had 45 saves in the win.

RW – Dmitry Sokolov (Russia, WJC’s) ~ the skilled scorer finally lit the lamp at the World Junior Championships when he blasted home a shot from the slot in Russia’s 4-3 shootout loss against Sweden.  Sokolov has a goal, 3 points, 12 shots on goal in 4 games.