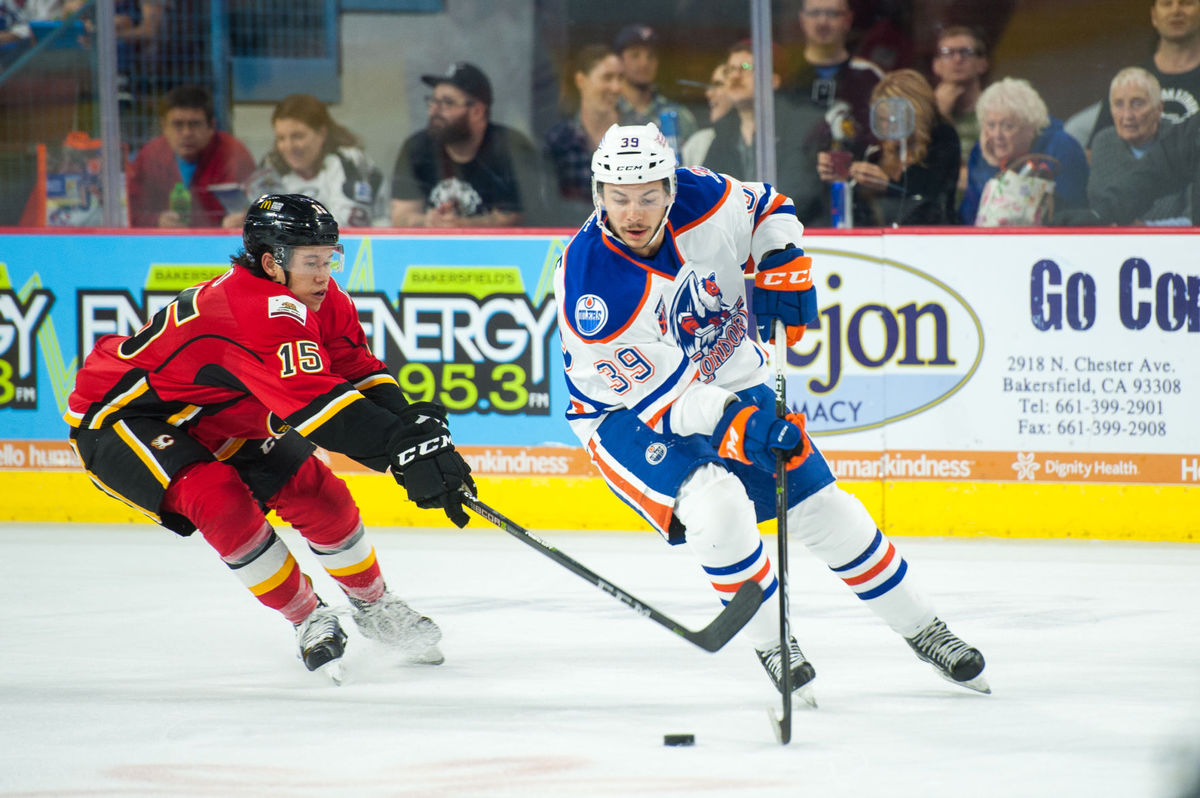 Sometimes when I read other Oiler bloggers or writers, I get inspired by their work to write something here. Our friend Lowetide did this to me yesterday when he took a look at the Oilers’ AHL affiliate in Bakersfield and compared the lack of prospects to Calgary’s situation in Stockton. The piece, for The Athletic, is a very good in-depth look and can be found here.

Mr. Mitchell is right when he proclaims that the Oilers are running out of recall options on the farm. Top option Jesse Puljujarvi is already in the NHL and playing a top-six role for the club. Jujhar Khaira has graduated from the AHL, while Tyler Benson and Kailer Yamamoto are still plying their trade at the junior level.

With that being the case, the Oilers likely next top recall option is Ty Rattie, a player the club signed in July. Edmonton’s only prospects on the farm, to my eye, are Joey LaLeggia and Kyle Platzer. That’s a major problem when it comes to the forward group in Bakersfield. Edmonton is going to have to continue to address this issue via the draft and via trade and free agency. Which brings me to July 1st, 2017.

Edmonton GM Peter Chiarelli had already made the decision to, it seems, blatantly ignore all roster holes even after severely weakening the team with the trade of Jordan Eberle and buyout of Benoit Pouliot. On this day, with ample cap space, Chiarelli made seven signings. They have played a total of zero NHL games with the club.

Rattie, a former second-round pick, has shown the most signs of life in the AHL with Bakersfield. He’s posted 10-10-20 in 30 games for the Condors, but has cooled down considerably from an early season hot-streak. It’s quite clear, as the Oilers work defender Yohann Auvitu at forward in practice, that the club doesn’t see Rattie as an NHL option.

Grayson Downing has 12 assists but zero (!!!!!) goals in 25 AHL contests, right on pace to match his disappointing 2016-17 season where he posted just 26 points in the AHL split between Tucson and Iowa. Mitch Callahan has just six points in 30 AHL games this season, arguably the biggest disappointment in the group after posting 43 a year ago.

Brian Ferlin? He’s played seven games and has 1-0-1 for the Condors this season.

The production from the forwards in this group is stunningly poor at the AHL level. Callahan, a player I thought could compete for a depth role with Edmonton after a strong run in the Detroit system, has been downright bad for Bakersfield this year. Downing, after a good first season in pro hockey, appears to be a low-level AHL option, while Ferlin is still working his way back from injury and still has a long way to go.

Defensively, Lowe has been fine as a veteran on the farm, as has Stanton. I’m okay with those two signings, mainly because Edmonton is trying to develop Ethan Bear, Caleb Jones and Ryan Mantha at the AHL level. When you have three young prospects like that playing, you need a few veterans so I understand the thought process there.

Still, I don’t think Lowe has what it takes to be an NHL’er at this point in his career.

In fact, one could argue Edmonton’s best free agent signing was Brad Malone. Malone has 7-9-16 in 23 games with Bakersfield and has appeared in seven games with Edmonton. Even though he was pointless at the NHL level, Malone still showed a strong effort level and was good to my eye in his limited role.

As Lowetide pointed out, the Oilers simply haven’t developed enough forward prospects over the years to fill holes at the NHL level. That’s a problem. When you don’t draft and develop well, you have to augment the system in different ways. Edmonton has also failed in this regard. One needs to look no further than Peter Chiarelli’s horrid July 1st to see an example.

Chiarelli signed a handful of forwards on that day that haven’t played an NHL game with the team and likely never will. On top of that, for the most part, they aren’t even making an impact on the minor league club. From this vantage point, it looks like a lot of wasted contract spots on the books. That’s a bad look for a team desperately trying to find some depth.

Even after ignoring the holes at the NHL, if Peter Chiarelli had found a way to add serviceable call-up options the Oilers wouldn’t be in as dire of a situation. Instead? Most of these players are non-factors at the AHL level. If that doesn’t alarm you…