Eagles' road to winning the NFC is terrifying 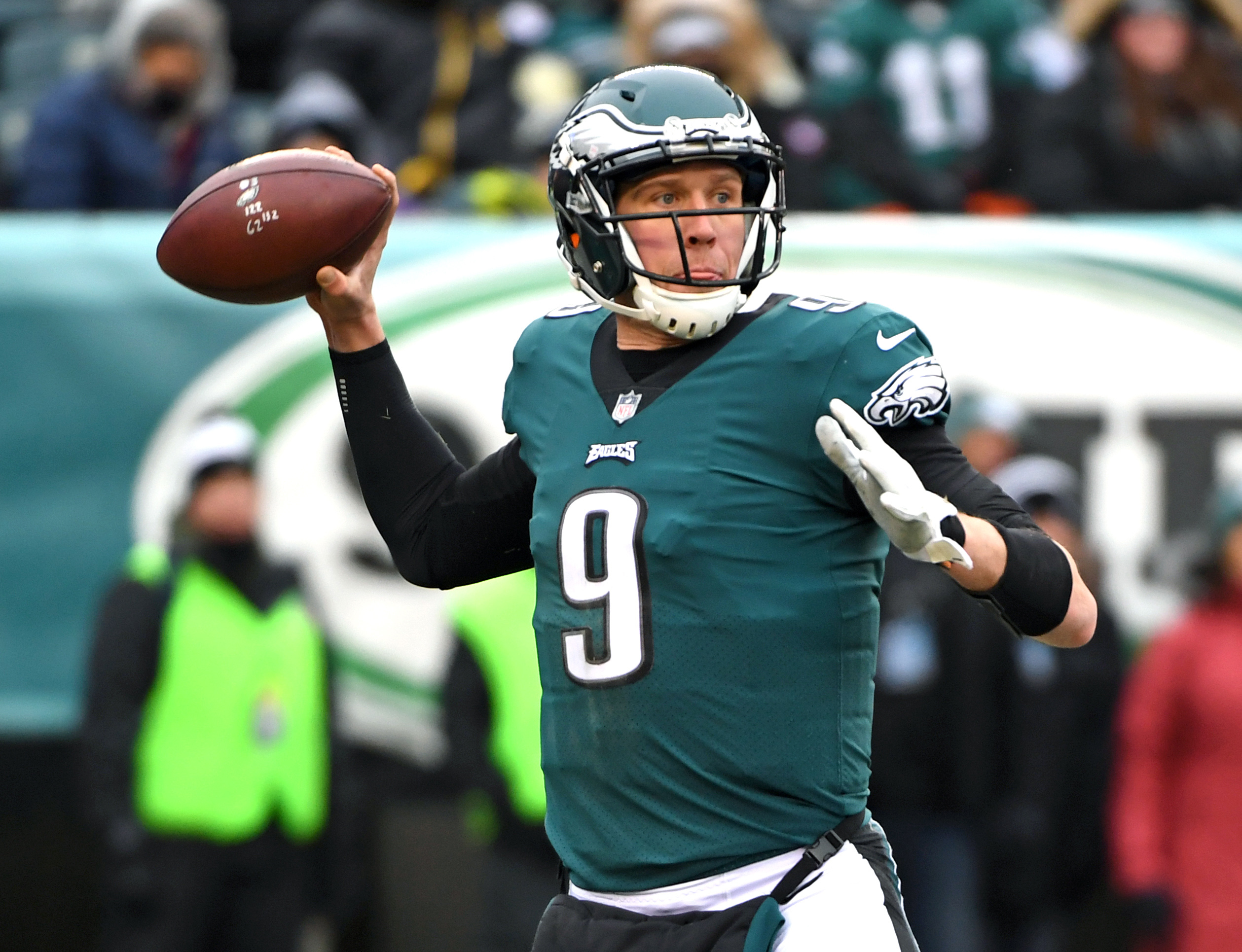 Eagles' road to winning the NFC is terrifying

In the interest of full disclosure, this column was going to be titled “The Comprehensive List of Why Every Team in the NFC Playoffs Makes me Shit my Pants as an Eagles fan”. Ultimately, it was a better idea to keep the title shorter and more concise. My Journalism 101 professor at San Diego State would applaud such a decision. It’s also usually a good idea not to have profanity IN the title.

The Philadelphia Eagles enter this year’s playoffs as the first seed after finishing 13-3. The road to the Super Bowl has an exit off I-95 because at least one team has to come to Lincoln Financial Field — more than one if things go Philadelphia’s way.

Did you pick up the hint of pessimism in the previous sentence? Good, because that’s by design.

Don’t get me wrong. I truly want the Eagles to do well in this playoff run, and anyone that knows me knows that I’m a “half-glass-full” kinda guy. However, I just don’t see it.

With Carson Wentz, the Eagles were so good. They were insanely good and good enough to win the Super Bowl in February. Without Wentz, the Eagles are 2-1 but looking more like harmless canaries than vicious birds of prey.

My brother, Attiba, is a New Orleans Saints fan (more on them, later), and he talked to me yesterday about how the Saints are backing into the playoffs. This was met with much anger and fervor when I explained to him that if anyone is rear-ending their way into the playoffs, its Philadelphia. The offense (and defense) looked bad against the New York Giants. The offense looked bad against the Raiders on Christmas and again against the Cowboys in the season finale this past Sunday.

(Seriously, Teebs. The Saints are fine, and you’re being non-objectively silly about your team.)

That’s why when you look at the field this year, it’s hard to find those two teams the Eagles can/should beat to get to Minnesota on Feb. 4. Every team scares me in some way (or in some cases many ways).

Ok. Of all the teams in this year’s field, this is probably the team that scares me the least. That’s saying a lot considering the Falcons have serious weapons in Devonta Freeman, Julio Jones, Mohamed Sanu, etc. The Falcons certainly have the ability to put up massive amounts of points in a hurry. That being said, I do believe the Eagles can get stops every once in a while.

The Falcons played Minnesota on Dec. 3. In some order, the Vikings defense and the Eagles defense are 1-2 in terms of ranking in the NFC (with the Rams being a close third). Atlanta only scored nine points and had 275 total yards of offense. Granted, the Eagles don’t have nearly the kind of talent that Minnesota does in the secondary to hold Julio Jones to 24 yards off of two catches, but the Eagles’ pass rush is very similar to the Vikings.

Philadelphia — with Nick Foles — can score on the Falcons, but the key there is running the ball since Atlanta is 19th in the league in opponent’s rushing yards per carry (4.1 YPC).

Then, of course, there is the mental aspect. Let’s say the Falcons are up by 10+. You really think Eagles fans at the Linc won’t be chanting “28-3” every chance they get? If you don’t think so, you don’t know us very well.

It helps that the Eagles have beaten Carolina, already. Atlanta is the team I’d feel comfortable enough playing in the Divisional Round, but Carolina is the team that I’d really want to see, first. In an ideal scenario, the Panthers go into New Orleans on Saturday and dispatch the Saints setting up “Eagles/Panthers 2: Electric Boogaloo”.

The Eagles match up very well against Carolina. Without Carson Wentz, the two offenses are pretty similar. They both have a tendency to sputter and fizzle frequently. Philadelphia has way better talent at the skill positions.

Alshon Jeffery/Nelson Agholor/Zach Ertz/Jay Ajayi/LeGarrette Blount vs. Cam Newton/Devin Funchess/Christian McCaffrey is pretty lopsided. The Eagles have a better chance to put up points on the Panthers defense versus the other way around.

Carolina’s defense is good, but again, the Eagles have already seen it, so why wouldn’t they go back to the old formula of just running everything possible at MLB Luke Kuechly and force him to make plays. The Panthers defense is aggressive, so look for more traps, screens, and counters instead of more vertical plays.

Philadelphia/Carolina is absolutely the match I’d want in the Divisionals. 100%. No question.

Able to score quickly? Check.
Able to score on a sustained drive of nine plays or more? Check.
A defense capable of making stops? Check.
Probably the hottest team coming into the playoffs? Check. And. Mate.

Listen, Drew Brees by himself is scary enough. Drew Brees with a power running game (Mark Ingram), a quick-footed playmaker in the backfield (Alvin Kamara), and wide receivers like Michael Thomas, Ted Ginn, Jr., and my brother’s favorite, Willie Snead is just downright terrifying and unfair.

If someone is passing around a weaponized hallucinogen similar to the Batman villain known as the Scarecrow, I’m going to need you to stop so I can finish this column. There are simply no words to express how much I DO NOT want to see the New Orleans Saints come to Lincoln Financial Field for a playoff game.

Don’t want. Do not want.

This falls into that same category that the Panthers fall in to. It helps my psyche that the Eagles have beaten them once already. It helps even more that they beat the Rams in Los Angeles, and the Rams have to come to Philadelphia. If the Rams were hosting the Eagles again, there’s no way they lose.

The Rams are the young, “how the hell did they get here” team in this year’s field. (You could say the same about the Jacksonville Jaguars, but since they’ll be out of the playoffs altogether in two weeks, I’m not too concerned. What? You think Jacksonville is beating either Pittsburgh or New England on the road in a playoff game?)

Los Angeles has the MVP of the NFL on their offense. That’s right. I said it. Todd Gurley is the MVP this year. It’s not Carson Wentz — as much as I’d love it to be. It’s not Tom Brady. It’s just not, Boston folks. Bring all the noise you want. I’m not listening. The MVP is Gurley.

Gurley has nearly 2,100 yards from scrimmage: 1,305 rushing and 788 receiving to go along with 19 total touchdowns. He is a load and a half to deal with, and the Eagles didn’t do so well the first time: 96 yards rushing and two touchdowns and another 39 receiving yards. Even if the Eagles manage to at least hold Gurley from going “Hulkamania”, there’s still the matter of Jared Goff to deal with.

Goff wasn’t bad against the Eagles a few weeks ago (16/26 for 199 and two TDs). The former Cal Bear also isn’t the utter dumpster fire he was last year. He’s good, and the NFL better get used to Wentz vs. Goff for a few more seasons.

What hurts the Rams is explained in the beginning of the paragraph before the last: “they’re young”. The Rams are new to this. Hosting a playoff game against the Falcons is one thing. Going on the road to face a Philadelphia team with much emotion, this fan base, and the cold weather is something else entirely.

If it comes down to Minnesota vs. Philadelphia in the NFC Championship Game, I may not even watch because I know how it’s going to go. The Vikings will roll into town with the possibility of hosting a Super Bowl. That’s a lot to play for, and the Vikings will be very hype for it.

After throwing two interceptions against Carolina on Dec. 10, quarterback Case Keenum has gone back to his role as game manager and was interception-free in the last three weeks of the season. The Vikings are well coached and highly disciplined. Beating them is no easy task.

That being said, they can be beat, but the Eagles HAVE to score points. If the Vikings are down by 14 or more, the game is over. Minnesota is not the “come from behind” type. The Vikings bread and butter is getting a lead and then using the defense to lean on you until it’s over.