GAMEDAY 42: A Blizzard is No Place for a Hurricane 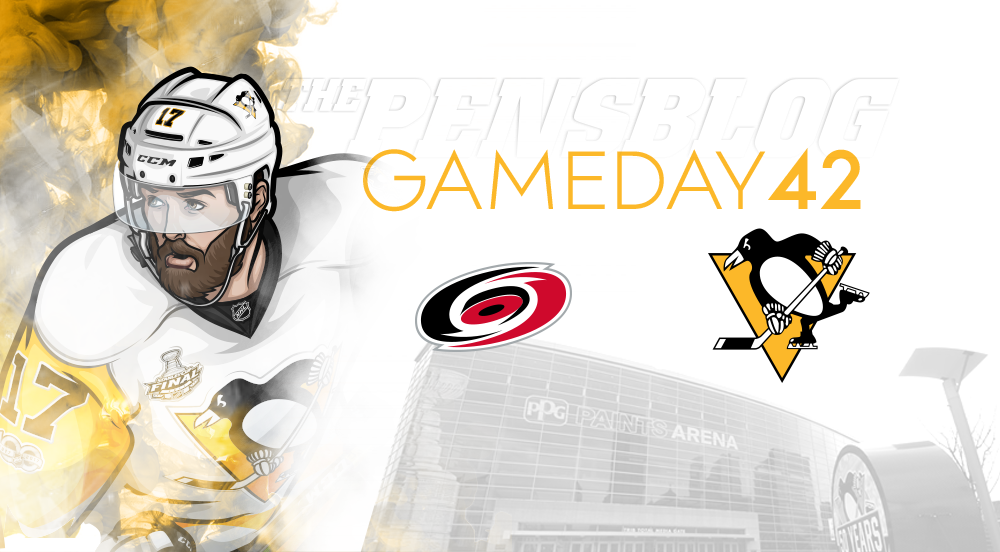 GAMEDAY 42: A Blizzard is No Place for a Hurricane

The Penguins carry the undefeated 2018 version of themselves back into The Paint Can tonight for an attempt at revenge over the Hurricanes. You may recall the game, the Penguins were coming off of a come from behind shootout victory over the Blue Jackets and we all thought momentum might finally be building. That momentum was left somewhere in Pittsburgh as the team traveled to Carolina and showed up for exactly 0 seconds of it. So now what are we to expect in this matchup against Carolina following a huge 5-1 victory over the lower half of Pennsylvania? In the previous game Mike Sullivan had to do a bit of line juggling thanks to an injury to Carter Rowney and it resulted in some extended shifts for the fourth line. During these shifts the fourth line kind of reminded everyone that they can in fact be productive when given 8-9 minutes a night. Obviously the player holding that line back from that time on ice average has been Ryan Reaves, but why? “Reaves doesn’t fit the Penguins mold,” no, he is not a speedy top line skater, but this looked a lot like a goal you would expect of the fourth line in the playoffs…

Please excuse us while we catch up on goal GIFs… Whew! That was something else. Can you beREAVE it? pic.twitter.com/xU85QMoSk6

Is it a coincidence that during both the Columbus game and the Philadelphia game Sullivan gave Reaves and the fourth line more minutes, and the team excelled in both games? It might have something to do with that line getting confidence as the staff has built their ice time up in baby steps, or it could be the extra 2 minutes rest the other players are getting per game, rest that probably isn’t a bad idea for a group trying to do something no expert thinks is possible. Reaves has a career TOI average of 7:53 and is currently getting just 6:40 this season (which seems high considering the amount of games we’ve seen him finish with less than 5). I don’t think giving Ryan Reaves 10 minutes a night is a great idea, but I do think the fourth line and Reaves have earned a bit of a raise and should get closer to his career average of 8 minutes per night.

The last time these two teams met, the Penguins forgot they were playing hockey. Now the Penguins are in the first of a back-to-back situation against two Metro teams ahead of them in the standings (at Islanders tomorrow night). The Islanders are also in action tonight against the Flyers, meaning Pittsburgh and Philadelphia regulation wins would result in the Penguins leap frogging both teams and finding themselves in the wildcard position granted the other teams have a few games in hand:

The division is so tight right now it really shows how important these two games are for the Penguins, if the Pens drop both games and the islanders beat Philly tonight, Pittsburgh has 43 points looking up to New York’s 48 and Carolina’s 46. The Penguins currently get some help in the tie-break as Carolina has padded their record with the shootout than other teams have. Obviously the team understands how crucial these division games are, so it will be interesting to see how much hop they have tonight following a big victory against Philly and now returning home briefly.

The Penguins didn’t give any updates yesterday on the injuries suffered during the Philly game so the status of Carter Rowney, Brian Dumoulin and Tristan Jarry remain unknown, so I just left them in the graphic. I don’t expect any drastic changes even if those guys can’t play, the team will put Hunwick in for Dumoulin, and call up Casey DeSmith. The organization decided to not take any chances with another goalie injury and scratched DeSmith last night while signing Sebastian Caron (yes, that one) to a PTO to play for Wilkes-Barre as a back-up. Of the three injuries Dumoulin’s holds the biggest impact as he has been the most consistent defender this season for the team, and hopefully his comes with the shortest duration of absence. Another thing to look for would be Simon playing as the fourth line center if Rowney is out, of course this could also mean the return of Gregory McKeggory. Riley Sheahan has been getting some hate from those that rely on the eye-test and some love from those that rely on fancy stats. We know from experience there is no middle ground between these two camps, so for that reason I want you to watch Sheahan tonight. Watch him, without comparing his production to HBK, a line that was as rare as they come in hockey. Sheahan isn’t putting up HBK numbers, and I hate to remind you of this, but HBK didn’t put up HBK numbers last season either. Sheahan has been statistically  better than Nick Bonino was as a Penguin as illustrated by Jesse Marshall on The Athletic yesterday. Argue what you want, but I have a feeling following his big game against Philly Sheahan and Sprong are hooking up for a few tonight.

Sebastian Aho is currently tied for the team lead with 30 points (11 goals, 19 assists) and has been a surprising bright spot for the Hurricanes the last two years. As a 19 year old rookie last season Aho played all 82 games cashing in for 24 goals and 25 assists and has picked up right where he left off this season. He has built a pretty good on ice relationship with co-team points leader Teuvo Teravainen and it is this first line that will prove to be a good test for Kris Letang as he gets back to work following injury.

It’s January and you hate to start saying that every game has major implications but when the difference between a regulation win and a loss is 4 points from the wild card spot that’s exactly what it is. Is all hope lost with a Penguins loss? Of course not. However with each loss the odds of making the playoffs shrink more and more. Following their loss to Carolina last week the Penguins dropped below a 50% chance of making the playoffs for the first time this season. A win tonight would get them back to that mark. The team started 2018 off right, they need to continue that trend and not the every other game trend we became familiar with during the final month of 2017.