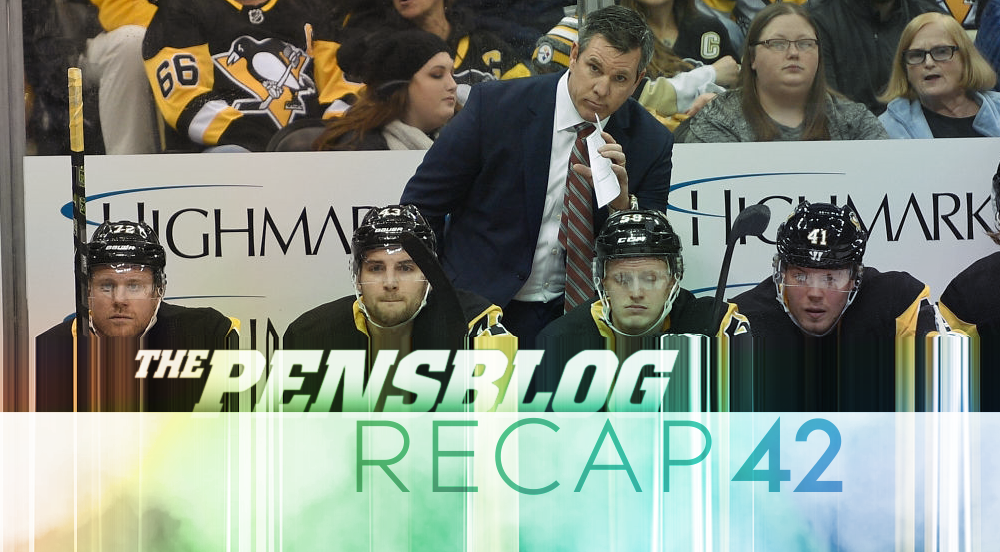 What’s up, cats? It was 70’s Night at the Civic Arena last night as the Penguins and Whalers faced off for a Thursday night National Hockey League game!!

Ok, we’re not doing that anymore. I will be calling them the Whalers the rest of this recap, however…

No matter how tough you think you are, you haven’t gone into public like this in the last 10 years unless it’s been Halloween.

Pens rolling with Jake Guentzel on the 3rd line and Matt Murray gets the nod.

I will call this game an abject failure, not for the outcome, but because Carolina did not wear Hartford jerseys. How far you willing to go for 70s Night?

Do you like low event, low shot hockey? Then this first period was for you!

Less than a minute into the game, Ian Cole had to make a heroic backcheck:

Throughout the first period, Bob Errey would continue to remind us that what Cole did should have been a penalty (maybe a penalty shot!) and wouldn’t let it go until it was time to appreciate Evgeni Malkin for everything Evgeni Malkin is.

If Geno scores there – the ceiling comes off.

As our friend Bob would keep reminding us, the refs would let them play until with just over 2:00 to go, Phil! would take a slashing penalty and Murray and the Pens would hold the fort.

We would exit the first period scoreless and no idea what was to come after a low-energy first.

Just under seven minutes into the second, Justin Skinner would turn Ian Cole into a lamp post and every Fleury apologist went full-Stan Marsh after finding some Internet while yelling, “But Murray’s glove!!!!”

All goalies have weaknesses, fight me.

Not great by Cole, definitely one Murray wants back, but he’s got to at least get that to the blue line or tackle Skinner.

Not a minute later – the league’s best power play would take the ice as Hartford’s hero would head off for the NHL’s dumbest penalty.

The best chance was from…….Jordan Staal. No dice.

The Whalers would control play the rest of the period and it would pay off as they went full Globetrotters:

Bad, bad period of hockey for the Penguins. No flow, not a lot of momentum or energy. Plus…

You know who doesn’t give up? Patric Hornqvist. Despite the Penguins listless attitude throughout the night, Hornqvist did what he does best – crash the damn net. Just a couple minutes in, he did what he could to provide a spark as he bumped Ward and it suddenly felt like Hartford had their focus rattled.

It may have – but the game at this point opened up.

Aho would make Justin Schultz like the former number four in Pittsburgh, you remember old Robert.

Great effort by Aho, but man…Schultz and G…need a little more, boys.

After the Aho goal – Bob Errey was stunned to learn Hartford was a good team. Several references to them being disciplined, fast and skilled. Lots of want to take it back to the actual 70s. “Give them a bop in the nose!” Sounding more 20s than 70s, but I digest.

As the game came back, Aho would show he attended Sidney Crosby’s School for Puck Tipping to make it 4-0.

Not much fight as Hartford would shut ‘er down and that would be that.

Get the entire hell out of here with this take. I’m sure it was in jest, Chris is usually a pretty good, level-headed mind, but his tweet was one of a few I saw with this thought.

Do you want to know what Dan Bylsma and Mike Johnston have in common? As stubborn as G-Off about Riley Sheahan.

Dan Bylsma teams avoid the middle of the ice and the front of the net like Washington and the conference final.

Our dearest friend Jesse Marshall, may he rest in peace, has several dissertations on how Mike Sullivan would change his game on the fly to make sure they were countering what other teams threw at Pittsburgh.

I don’t know if the Penguins are tired, suck or what – but I know this, it isn’t coaching. Hasn’t been for nearly two years.

What do you know? Another back-to-back. Pens @ Brooklyn tomorrow.