For Islanders, something has to give as team continues to struggle 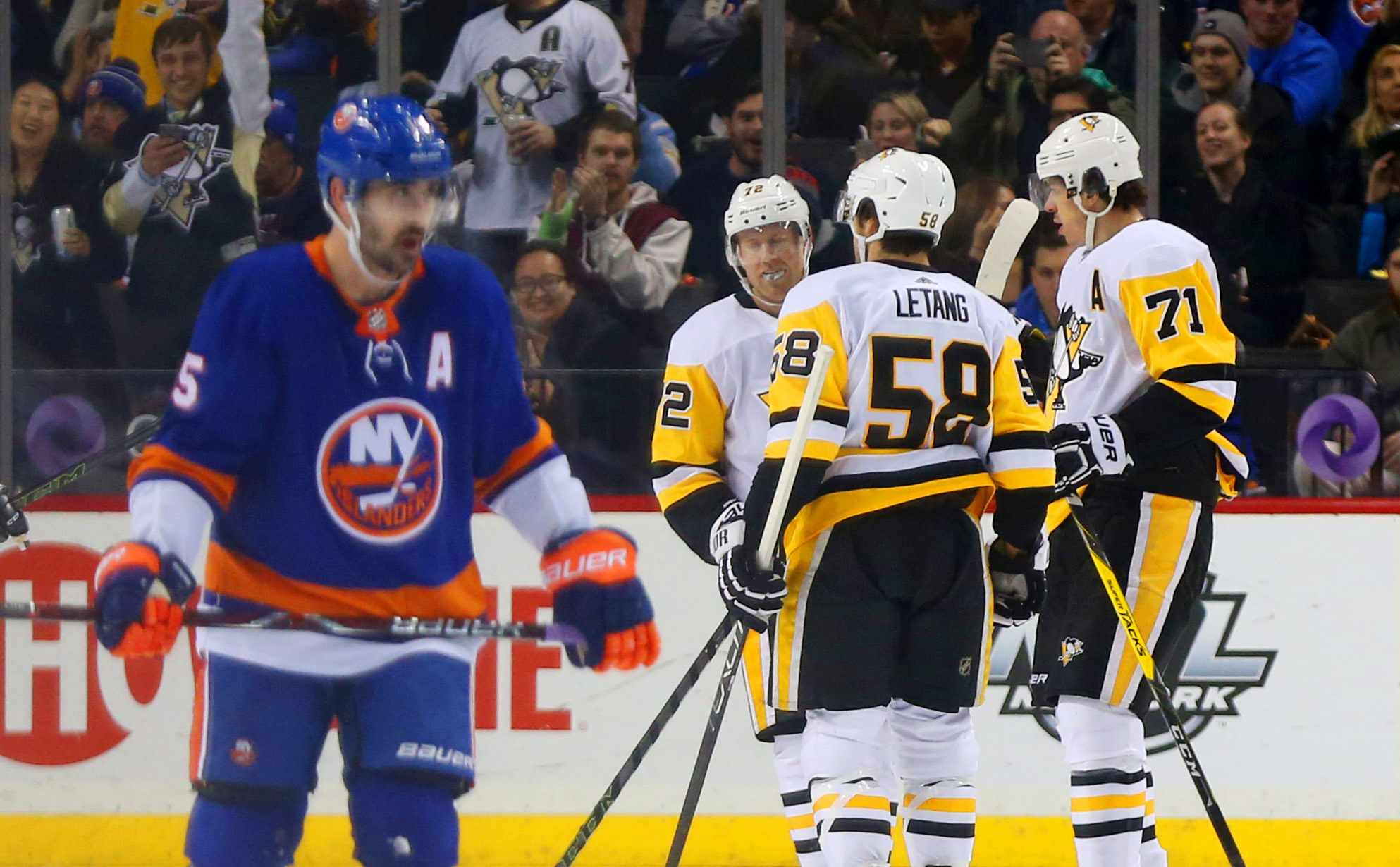 For Islanders, something has to give as team continues to struggle

NEW YORK — The Islanders locker room seemed dejected and frustrated as it has ever felt when reporters entered following the team’s latest disappointing loss, this one a 4-0 defeat to the Pittsburgh Penguins.

The group of reporters flocked to John Tavares — one of the few players who remained in the dressing room — looking for answers to what has become an all too familiar storyline with the Islanders lately. New York played a good first period, generated scoring chances, put pressure on Penguins’ goalie Tristan Jarry, but the game remained scoreless after 20 minutes.

However, like the game in Philadelphia the night before,  the Islanders allowed quick goals to open the second period and the wheels fell off the car. And from there it was over and the Islanders had fallen further back into the Metropolitan Division basement.

“We just didn’t execute as well as they did,” Tavares said matter of factly, “it’s plain and simple.”

It’s been a problem for the Islanders through their five-game losing streak which has seen the New York fall to the Winnipeg Jets, blown out against the Colorado Avalanche, look listless against the Boston Bruins and watch decent first period efforts erode into second period collapses against the Philadelphia Flyers and now the Pittsburgh Penguins.

READ: Things Go From Bad to Worse as Islanders Fall to Pittsburgh, 4-0

There were far more questions than answers following the latest loss on Friday night, when the Islanders were outshot 19-9, out-attempted 27-14 and surrendered three goals in the second period. It was nearly identical to the previous night when the Islanders saw a 1-1 game turn into a 5-2 deficit by the end of 40 minutes.

Islanders head coach Doug Weight couldn’t put his finger on what it was that has been ailing his squad in the second period of late.

“It’s not a good period for us,” Weight said. “What in the heck could be the reason for that? We come out of a 0-0 first period, chances were pretty even, they threw a lot of shots from the outside late in the period, but really it was an OK period. It was good. We were in a good place in our game and I don’t know.”

“I don’t know what it is about the second period,” a somber-sounding Weight added.

Part of it has been the Islanders constant struggle in their own end and miscues with the puck that have given their opponents ample opportunity to bust games wide open. The Islanders team defense has not bee strong this season, and neither has their goaltending, but that was masked by the fact that they have been one of the highest scoring offenses in the NHL this season.

But, in the Islanders five-game slump they have been outscored 25-8 and the problems that their league-worst 3.64 goals against per game have created have become even more painstakingly obvious.

“We’re just getting scored on because we’re making mistakes that good teams in the NHL just don’t make,” Cal Clutterbuck said with frustration in his voice. “Maybe they make them every once and a while, we’re making them often. You have to just not make those mistakes. I don’t really know what else to say.”

The defensive miscues and goaltending woes are nothing new when you look back at the Islanders’ season so far. It’s been an issue that’s plagued the Islanders all year, but as the scoring has dried up the issues have become more magnified.

It hasn’t helped that New York has lost Calvin de Haan and Johnny Boychuk to injury, and Josh Bailey, Andrew Ladd and Ryan Pulock all left Friday’s loss early. That hasn’t the Islanders one bit either, but things had become hairy before the injury bug started to go around.

And now the Islanders have found themselves on the outside looking in when it comes to a playoff spot, which seemed all but certain just before the calendar turned to December. The latest loss coupled with the Flyers win on Saturday pushed the Islanders into the Metropolitan Division basement and three points back of the final wild card spot in the Eastern Conference.

It has turned Sunday’s afternoon matchup with the New Jersey Devils — the Islanders final game before a week-long break — into a must-win game to stem the tide of the team’s recent misfortunes.

To do that the Islanders will need to figure it out internally. Whatever has been preventing them, whether it has been mental or structural, needs to be ironed out so that the team can return to its pre-December success. For the first two months of the season, the Islanders knew that as the season progressed their high rate of scoring would not be maintainable and they would need to win low scoring games.

“It’s January in the NHL and we’re playing a lot of divisional teams, and these games aren’t meant to be 5-4,” Clutterbuck said. “They’re meant to be 3-2, 2-1 games so if we want to win games that’s the way we’re going to have to win them.”

The pressure is on now to find a way to do just that. To shore up a defense that has seemed at times overwhelmed by opponents and goaltending that has looked fantastic one minute and lost the next.

For the time being, there doesn’t appear to be any outside help coming or changes to management on the horizon, so the Islanders must figure it out themselves. Whether they can manage to do that is anyone’s guess.