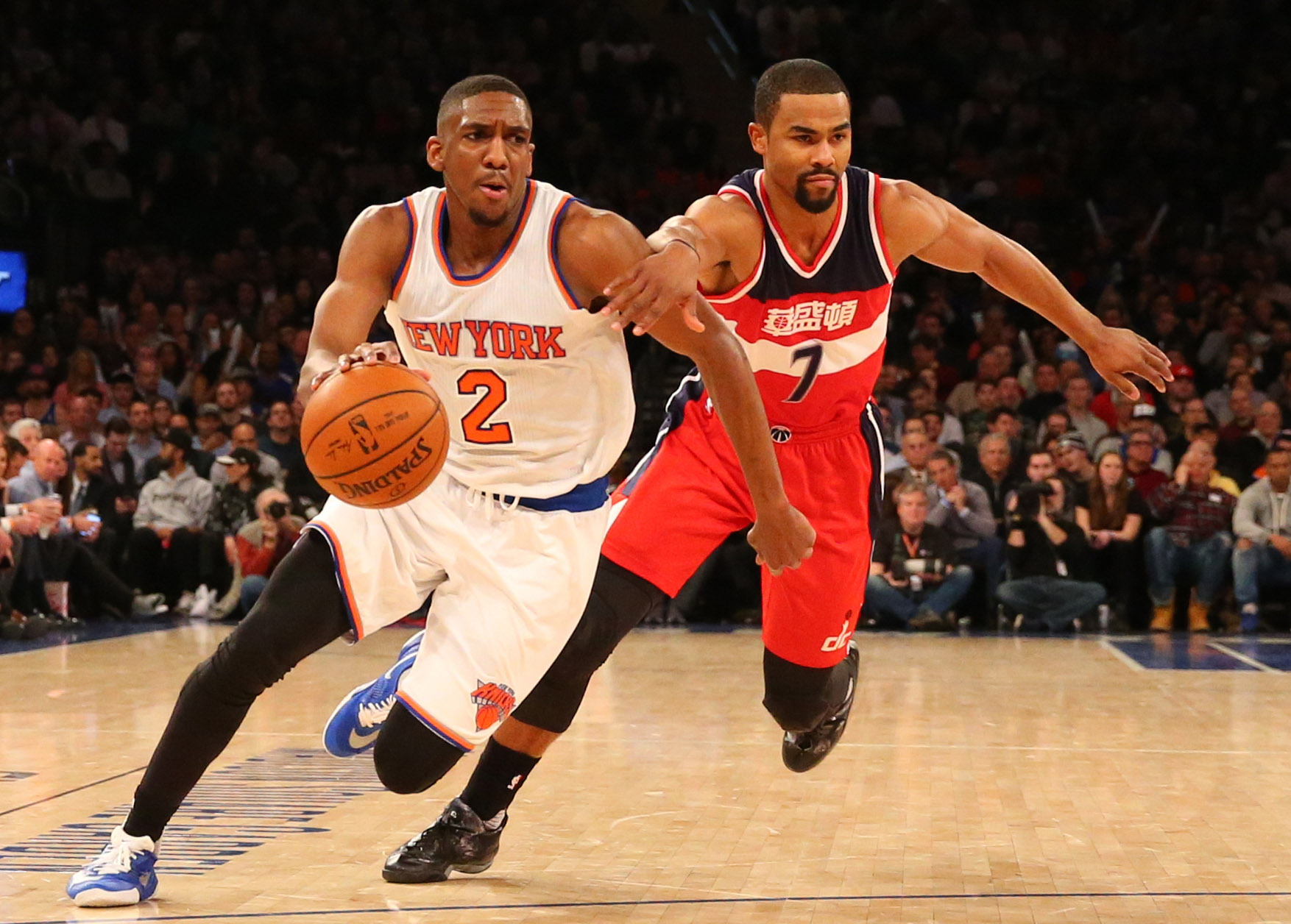 An undrafted rookie’s journey to the NBA may be one of the toughest tasks for a young player. The word “undrafted” is more than just nine simple letters. For some, it can be a motivational tool and a chip on their shoulder. But for Langston Galloway,  the phrase, “MR. UnDrafted,” is something that will always stick with him.

“That’s a really huge phrase to me, because I know there are a lot of teams that passed up on me, especially in the draft,” Westchester Knicks alumni and Detroit Pistons guard Langston Galloway told KnicksJournal.com  in an exclusive one-on-one interview. “I know that label will never leave me. I’ll always be an undrafted player and I have to go out there and work 10 times harder than the next guy. I’m always out there trying to prove myself and prove it to the next person that, ‘Hey I’m just as good or better than whoever is in front of me.'”

After impressing the New York Knicks during 2014 Summer League, Galloway spent the preseason with the team. After being waived by the Knicks on Oct. 25, the St. Joseph’s product had a decision to make: head overseas to France, Italy or Spain, or bet on himself in the NBA D-League (now G League).

Instead of taking a more lucrative offer from a team overseas, Langston Galloway joined the Westchester Knicks. The chance in the NBA’s minor league wasn’t about the money. It was about the main thing the league provides: an opportunity.

In recogition of the third-year anniversary of his NBA call-up, Galloway reflected more on his journey, speaking to Knicks Journal.

“I knew that my opportunity was pretty slim to make an NBA roster at the time,” Galloway said. “I knew that if I was given the opportunity just to try out with any team and go in there and compete against anybody, my competitive nature would bring me over the top. I think staying in the states instead of going overseas was the best decision I made in my life. Just to know that I’m going to bet on myself and go out there and compete and get a shot.”

An opportunity in the NBA’s minor league doesn’t have a price. It gives players a chance to show that they can compete against the top players in the world.  They have an opportunity to earn an immediate call-up, while staying under an NBA radar.

“Going into my rookie year, my expectations were middle of the road,” Galloway stated. “I knew that if I could just get an opportunity with any team, I think I could really make a difference and try to make the most of my opportunities.”

“I couldn’t care less about the money. My career was just starting. I really wanted to take the opportunity on myself and stick it out in the D-League and see what would happen,” Galloway continued.

His time in Westchester was valuable to him. Langston Galloway had the opportunity to continue growing as a player while developing and honing his skills against NBA caliber competition.

“It was really good, because they had a lot of talented guys in the D-League when I was there, [along] with a lot of guys that had either been ex-NBA players or guys that might have been a couple of years older than me,” Galloway said. “I had a lot of heated battles while I was in the D-League with Westchester and it really helped me with my progression in learning the point guard and shooting guard spot.”

Nearly two months after his debut in Westchester, Langston Galloway earned the call of a lifetime. On the other end of the phone was the General Manager of the Westchester Knicks, Allan Houston.

“I think that was one of the better moments I’ve had,” Galloway said. “I was just hanging out with my friends at the apartment we were staying at [with] my D-League teammates. We were actually just playing video games and I received the call from Allan and he was like, ‘Pack your stuff up and head down to D.C. You got called up.’ And I couldn’t believe it. I was just really excited for the opportunity.”

The former Westchester guard could have never predicted he would  earn a call-up in such a short period of time. Galloway suited up in 19 games for Westchester during the team’s inaugural season.

The same day that Galloway received the call from Houston, he made his NBA debut against the Washington Wizards. He recorded seven points, three assists, and two rebounds in 17 minutes off the bench. He went onto play in 45 games, while starting in 41 of those contests.

Despite the New York’s struggles during the 2014-15 season, the 6’2″ guard started to earn the respect of the organization through his hard work and commitment to proving he could compete against the top players in the world. As the season went on, Galloway received quality playing time.

“It was big because I was just going out there and competing,” the former Knicks guard stated. “There’s a lot of talented players and a lot of guys that work hard. I think I fit that mold. I just wanted to go out there every night and play against the best point guards. I just knew I had to go after them before they went after me.”

Galloway’s rookie season was a story in of itself. He went from the Westchester Knicks, to earning multiple 10-day contracts. After starting 41 games, he became the first undrafted Knicks player to make an NBA All-Rookie team, as he was named to the All-Rookie Second Team in 2015.

“There were a lot of ups and downs,” Galloway added. “I learned a lot and I never took anything for granted. I took every opportunity that the Knicks gave me, especially being in Westchester, too. I just tried to make the most of every opportunity and enjoyed the ride, so it was definitely a great experience and I wouldn’t change it for the world. I continue to make the most of wherever I can fit in and be the same person I was day one.”

It’s been three years since the Westchester Knicks saw their first player earn a call-up. Galloway will always be linked to the minor league affiliate. Three years after being the team’s first-ever call-up, is it the right time for Westchester to retire his number?

“That would be amazing,” he said. “Just an honor in itself just to know that’s where I started my career at. I worked hard and showcased what I could do. I tried to prove I belong. I would love to see that and hopefully it will happen.”

Galloway earned his call-up from Westchester and while he cherishes where he’s been and where he continues to go, the 26 year hasn’t looked back as his NBA career only continues to progress. The guard spent two seasons in New York, and this past summer, his hard work was once again rewarded in the form of a three-year, $21 million deal with the Pistons. He is currently averaging 6.6 points and shooting 37% from downtown this season.