Lightning defenseman Dan Girardi took one for the team during Sunday’s game against the Red Wings, and it looked painful.

Girardi, who is known for blocking shots, bravely stepped in front of a slap shot off the stick of Martin Frk in the second period of the matchup. The Lightning defenseman got down on one knee and was hit in the side of his head by the puck. Girardi immediately dropped to the ice and stayed down for a few minutes, before eventually being helped up so he could hit the dressing room.

Video of #Lightning Dan Girardi taking a puck to what looks to be the side of his head. Skated off the ice with help of teammates #GoBolts pic.twitter.com/FjYST4r2L7

Girardi did not return to the game, and the Lightning had the following to say about his condition.

#TBLightning defenseman Dan Girardi will not return to tonight’s game after getting hit by a shot in the second period, but initial reports indicate he is okay. #TBLvsDET

It’s good to hear Girardi is OK after that scary moment on the ice. 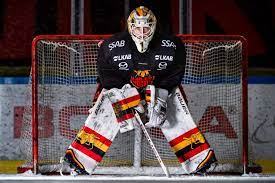