Your Morning Dump... Where It's a Nice View From the Top 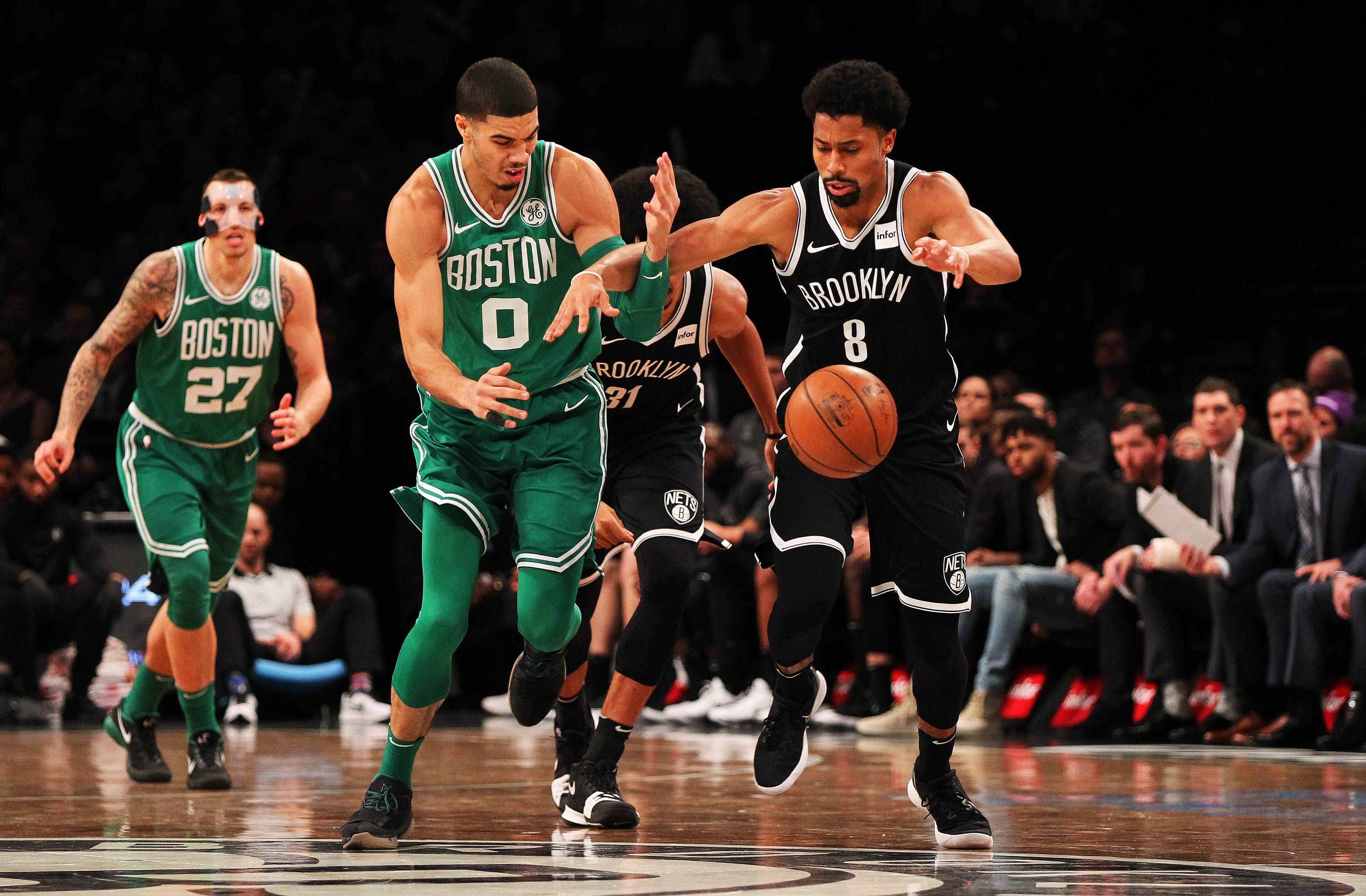 Your Morning Dump... Where It's a Nice View From the Top

The 25-year-old veteran quickly allowed after the latest triumph that he wasn’t surprised in the least that Tatum drained the winning 3-pointer from the left corner in the final minute. In fact, he expected it.

He knew well to whom he was passing the rock.

“We had a developing relationship before this, before he even got drafted, so he’s kind of been part of the family even before then,” said Irving of the 19-year-old wunderkind. “And that was even before I got traded. So it was already developing into a brother-brother relationship, and then I ended up coming here and getting traded here. And then from that point it’s just continued to develop.”

When discussing issues like this, Irving seems to take care to avoid speaking in a patronizing manner — such as a star from a previous stage of his basketball life may or may not have done. Instead, he always veers toward crediting the subject, particularly a younger one, for his own merits and accomplishments.

“I give him his space and he gives me mine,” said Irving of Tatum, “but whenever he needs an ear to lend or that extra push, I’m there — and I told him that from Day 1. I said, ‘No matter what’s going on out here, you can always look to me to do that confidence in you.’”

Through 43 games, Jayson Tatum has exceeded all preseason expectations, and quickly emerged as the top player from his draft class. Against Brooklyn on Saturday, he saw his first test as a clutch time shooter, and passed with flying colors. With under two minutes to play, he sliced through the lane for a ferocious dunk, then nailed a corner-three the next possession, securing the Celtics 33rd win.

It helps having a great mentor in fellow Duke-alum Kyrie Irving. Based on their playing styles, it makes sense that the two would gravitate towards one another. Like Kyrie, Tatum’s game receives endless praise from current and former NBA players.

Unlike other isolation scorers, Tatum plays within the flow of the offense, and doesn’t need the ball to make an impact. Before the draft, the “experts” weren’t certain he could thrive in an off-ball situation. But he’s impressed everyone with his cutting and spot-up shooting. He’s established a comfort within the offense and demonstrates an advanced feel for the game, and accordingly has flourished as the Celtics 4th/5th option.

If there’s any weakness to Tatum, it’s his passive nature. Of course, he’s a rookie, and will defer to his veteran teammates. But with his scoring prowess, it’s interesting how he doesn’t assert himself more on offense, considering he can create a good shot whenever he wants. In future years, with increased expectations, I’m fascinated to see how quickly Tatum develops the “alpha-dog” scoring mentality that so many great scorers posses.

Two takeaways from the Steve Bulpett article: first, I love how he takes a shot at the patronizing leadership style of LeBron James, that of course, led to his star point guard requesting a trade. Second, when Kyrie mentioned the “brother-brother” relationship with Tatum, it brought me back to this clip, when Kyrie was asked whether LeBron was a “father figure.”

Page 2: Where Horford is Aging Gracefully

“He’s better than ever,” said [Nets Coach] Kenny Atkinson. “That’s just how I see it.

“You know, it’s more than a coincidence that we were No. 1 defensively in Atlanta that year we won 60 games, No. 1 or No. 2, and he was a big reason why. I don’t think he gets enough credit for his quarterbacking a defense.

“To have a big like that who’s so mobile, so agile, so intelligent, it’s huge. They obviously have other really good defensive players, but I think he’s the quarterback.

“Then offensively Brad (Stevens has) done a fantastic job letting him quarterback on offense, too,” he said of Celtics’ coach. “Obviously Kyrie has the ball in his hands a lot, but it’s those two playing DHO (dribble hand-off) action, pick-and-roll. Al’s out there a lot handling it.”

“I was thinking about it today,” he said. “You think of the top power forwards in the league, he’s got to be 1, 2, 3. Draymond Green, him, Giannis (Antetokounmpo) — to me, they’re in the same bucket.

“And I’m not saying that because I know him. I really believe that. He’s a game-changer.”

As Kenny Atkinson mentioned in his effusive praise, Horford is the team’s quarterback, both on offense and defense. He spaces the floor, constantly finds cutters and shooters, handles the ball, sets effective screens, picks his shots efficiently, and that’s only the offensive side. Young teams usually struggle on defense, but Horford’s leadership has allowed the Celtics to maintain the league’s top defensive rating.

The media consistently overlooks his special passing abilities. Few centers can average over five assists a game, and Horford’s doing it for the second straight year. Joakim Noah most recently did it in 2014-2015. Bill Russell and Kareem Abdul-Jabbar had two seasons of 5+ assists, Vlade Divak had one, Demarcus Cousins is doing it this year, while Chris Webber and Kevin Garnett did it from the power forward spot (Side note: Wilt Chamberlin led the league in assists during a year he deliberately tried to win the assist title, the most blatant stat-chasing season of all time… I’m not counting that).

Horford doesn’t have the length of Rudy Gobert or the lateral quickness of Draymond Green, but his flawless positioning and impeccable court awareness make him an elite defensive player. He’s constantly barking orders to perimeter players, and whenever they miss an assignment, Horford is a step ahead, covering any mistakes.

I can think of several players who could replace Kyrie and provide similar production. The superstar guards, like Westbrook, Curry, and Harden would provide the same impact, while lower caliber guys, like Kemba Walker or Mike Conley (or even Isaiah Thomas, for that matter) could do 80 percent of what Kyrie’s doing.

How many guys in the league could legitimately replace Al Horford and seamlessly fit into the offense? Possibly Marc Gasol. Demarcus Cousins maybe from a talent perspective, but his personality would conflict with the team. Anthony Davis is a superior player, but from an IQ and passing standpoint, he’s not on Horford’s level. Towns and Embiid are still too young.

Additionally, with inexperienced guys like Tatum, Brown, Ojeleye, Theis, and Rozier, they follow the lead of veterans. It’s tough to emulate Kyrie’s dazzling offensive abilities. Horford always makes the right pass, always plays hard on defense, always puts the team ahead of himself. He’s an 11-year veteran and a four-time all-star, and in the ego-driven NBA environment, it’s rare to find a talented player whose such a selfless teammate. When a team has that kind of leader, its not surprising that the young players display an advanced level of maturity.

This is NOT a knock on Kyrie, but a recognition of Horford’s unique skillset and how it meshes with the team’s success.

For the second straight week, Atkinson went out of his way to praise Horford… and he didn’t even play. Guys who’ve been around Horford know his true value, how his impact extends beyond the stat sheet. It’s not surprising hearing these comments.

He’s an all-star lock, and if he continues this pace, he’ll earn 2nd team All-NBA. Are the sports radio guys still killing him about the contract? I’d imagine there are some glorious “freezing cold takes” from last year.

In case you forgot, Ainge traded the No. 1 overall pick in last year’s draft to Philadelphia for the No. 3 selection and another first-round pick. The additional pick would be one of two held by the 76ers, one acquired from the Lakers, the other via Sacramento. The Celtics would get the Los Angeles pick if it fell between No. 2 and 5 this season. If it didn’t then the C’s would take the Kings first-rounder in 2019.

All of a sudden, “#Lakerspick” is a Twitter must-follow.

The Lakers ended their 9-game losing streak last night against Atlanta. But never fear… it was only Atlanta. They needed to face the NBA’s worst team to end their losing streak. The Lakers are awful, much worse than the Nets, and Danny Ainge is once again looking like a genius.

Boston Globe: Kyrie Focused on Being a Leader