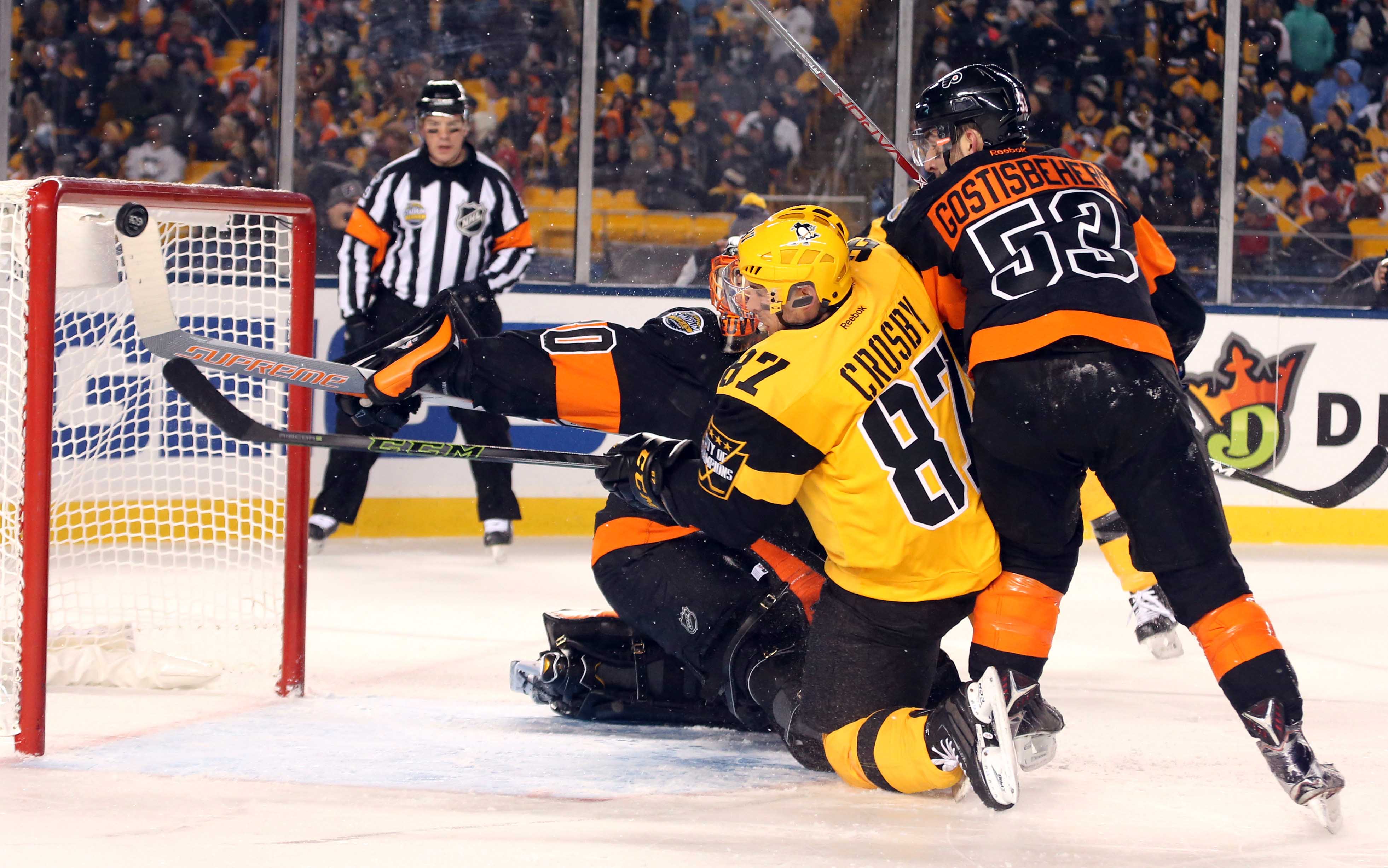 The Penguins earned a much-needed win Sunday night, 6-5 in overtime at home against Boston, resulting in their first two-game win streak in over a month. Evgeni Malkin dropped the anvil in OT after he and Kessel sliced through the Bruins zone like two runaway bandsaws.

Two other game-changing plays stood out:

Crosby’s vision: After scoring three straight goals in the first to take a two-goal lead, the Penguins gave it all back in the second when Boston scored four straight to take a 5-3 advantage. Late in the frame, Charlie McAvoy went to the box for jobbing Daniel Sprong and with time winding down in the period, Sidney Crosby mapped out exactly what he wanted to do on the power play in a matter of seconds, then made it happen in the way that only Crosby does.

It was suggested last night on Penguins Radio that Crosby may have seen Malkin’s reflection in the corner glass before making the no-look backhand pass.

I suggested Crosby and Malkin communicate by telepathy.

Pensblog alumnus and TheAthletic Pittsburgh analyst Jesse gave the real explanation, noting Crosby’s subtle head-turn before moving into the corner to get the puck.

Look at this clip. Seriously. Look at it.

Watch Crosby from the start. He identifies where Malkin is seconds before he's even involved in the puck battle so he can no-look this pass right to him. He's three steps ahead of everyone. https://t.co/U7Mdw96URh

Odd decision, by the way, for Boston to suddenly all congregate in the corner of the ice leaving Malkin wide open…

Murray’s resolve: With just over a minute left in regulation and the Pens and B’s tied at five, Zdeno Chara sprung Brad Marchand on a partial breakaway inside the Pittsburgh zone, splitting Jamie Oleksiak and Matt Hunwick. Oleksiak slashed Marchand resulting in a penalty shot.

Admit it. You and everyone inside PPG were clenching so hard.

He out-waited Marchand and swept his middle leg over just in time to trap the puck, for his sixth save on six shots in relief of Tristan Jarry.

Circle this game and these plays as a launching point if the Pens go on some unreal run.

Now the Penguins are in the midst of their bye week, with no games scheduled until Saturday afternoon. While Pittsburgh currently holds East Wild Card #2, they’ve played more games than all three teams below them in the division. As those squads catch up later this week, we’ll have a better idea as to where the Penguins stand heading into the final three months of the season.

The 10th Winter Classic occurred last Monday but did anyone outside of New York state notice? For the fourth straight year, TV ratings on NBC decreased. Only 2.48-million viewers tuned in to watch the Rangers beat Buffalo in overtime, down 3.1% from last year and down 55% from the most-watched New Year’s outdoor game, the 2011 Concussion Classic at Heinz Field. Some cited competition from college football bowl games or the uninspiring, meaningless venue – Citi Field – or the involvement of one of the worst teams, from one of the smallest markets, as reasons for low viewership.

However, bowl games predate the Winter Classic and Citi Field is as meaningless as 2015 host venue, Nationals Park. More simply, the novelty of outdoor NHL hockey has worn off after a decade of oversaturation: not only annual New Year’s Day games but the haphazardly scheduled “Coors Light NHL Stadium Series” and Canadian “Heritage” and “Centennial” Classics, with only a limited number of northern and northeastern teams participating. This serves to alienate fans from the other three-quarters of the continent. Chicago will play their sixth outdoor game at the 2019 Winter Classic, while the Penguins will play a fifth time outside in the 2019 Stadium Series.

Some think pitting Boston and Chicago at Notre Dame Stadium next year will, as a minimum, boost attendance and TV ratings. But if one of the NHL’s long-term goals is to popularize the game in new markets and expose new fans to hockey, then recycling and trotting out the Bruins and Blackhawks will do nothing of the sort.

The NHL continues to choose teams and locations that maximize TV ratings and attendance, i.e. advertising, ticketing and merchandising revenue. However, it is not so easy to quantify the future benefit of creating new fans (i.e. new purchasers of NHL content) that the league could reap from placing the Winter Classic in a seemingly unfit location.

What if the Coyotes, Golden Knights or Panthers laid some pipe outdoors to create ice under the sun? The technology to make ice in hot weather has existed for over a quarter century and has only improved with time. In fact, Las Vegas actually hosted the first outdoor NHL game in the 1991 preseason.

Sure, the climate obviously gives an irremovable giant middle finger to these Sunbelt cities as their teams work to build a hockey fanbase in competitive sports markets and true, there would be no monetary present-day value for the NHL to have medium-sized markets like Phoenix, Vegas or Miami as hosts of a Winter Classic.

But the potential benefit of attracting new customers to hockey should not be overlooked. Establishing a strong ticket-buying and hockey-watching TV/streaming audience in the two desert cities or South Florida would ultimately yield more local revenue than hockey-rabid Canadian cities like Winnipeg and Ottawa, simply based on the superior population size of most U.S. NHL markets.

Four years ago when the Stadium Series began, many watched with curiosity when Dodger Stadium in Los Angeles was converted to a hockey rink. Local ratings were strong and Southern California sports fans who would never have considered hockey before became Kings or Ducks fans that night.

The NHL can continue the boring revolving door of Hawks, Pens, Bruins and Rangers every year on New Year’s Day, to an ever-dwindling audience. Or they can be innovative and bring the Winter Classic to new teams and new cities, to create new fans and ever more revenue streams.