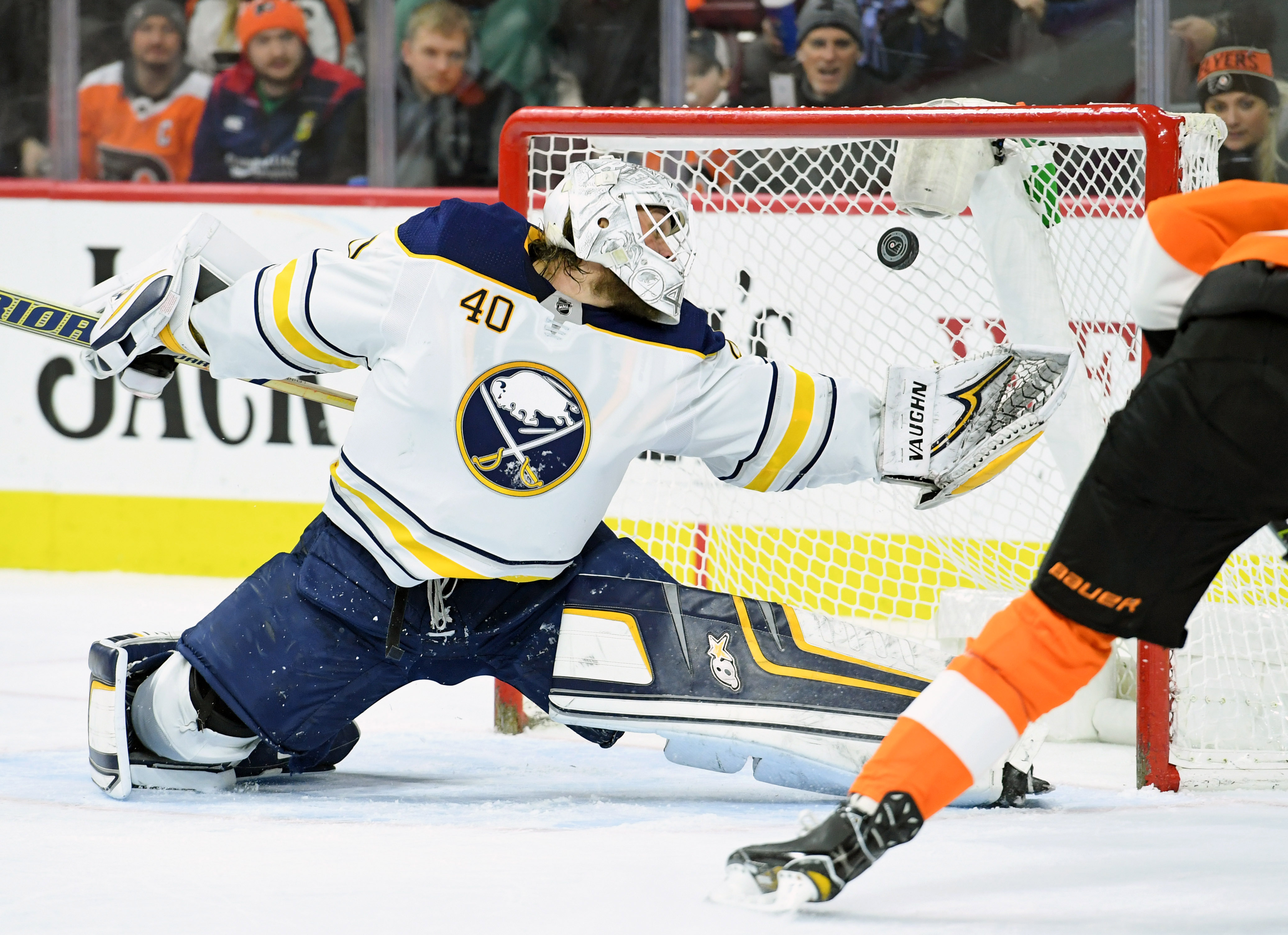 While we were all living and dying with the Bills wild card game, Buffalo’s other team, the Sabres, were also playing. Maybe you got a push notification in the mid-4th quarter about the game, which ended in a 4-1 loss to the Flyers. It was the team’s third straight loss, and at the halfway point of the season, the Sabres sit in 30th place (out of 31 teams), three points ahead of the woeful Arizona Coyotes.

How did it get so bad for the Sabres? My working theory is that when Sean McDermott and Phil Housley met for the first time, their handshake did a Freaky-Friday type switch of the two teams. The Sabres are in the tank, and the Bills are the team that finally put it together for a playoff run.

But in reality, the Sabres have been set up for this for a while. Tim Murray took the roster down to spare parts and then never bothered to really build it back up. He got Eichel, he got O’Reilly, he got Kane, but he didn’t do enough to fill out the rest of the roster with actual NHL talent. We can relitigate every trade and signing he made over in the most tedious corner of the Sabres internet, but I’d rather just chalk it up to a guy trying, and failing, to go from 0 to 100 in about two offseasons. It was enough to get them out of the basement, but not beyond, and now they’ve slipped back under new management.

Miss me with your objections to the title. It is hopeless. “Oh, but Casey Mittelstadt! Alexander Nylander! Brendan Guhle! The lottery!” If each of those players hit their ceilings and the Sabres actually won a lottery, then we’d be talking. But real life isn’t like that, and the Sabres don’t look like they’ll be good for a long time, barring multiple strokes of good fortune. The chances of that are slim, though, so we’ll go with hopeless.

The Sabres, as currently put together, are trash. They have, essentially, three top-six players – Eichel, Kane, and O’Reilly. Theoretically, Okposo and Reinhart should be top-sixers, but they haven’t played anything like it. Benoit Pouliot, Jason Pominville, and Zegmus Girgensons take their turns moonlighting as the sixth top sixer, and each has flashes but would be better suited to lower minutes against softer competition. (God bless you Pommers, but you’re not quite there anymore.) The rest of the bottom six is bleh. It’s just nothing. This is a league where the best teams run four lines that can skate and at least threaten on offense. The Sabres have one and a half good lines, and they’re probably going to trade Kane in a month.

Let’s say the Sabres are able to sign Mittelstadt out of college this season, which is something they should definitely try, as Mittelstadt was one of, if not the best, players at the recent World Junior tournament. (Like most of Buffalo, you may have missed it.) He has elite offensive IQ and controls the puck like a poor man’s Patrick Kane. Expecting him to step in and be an effective top six forward in his first season’s worth of games is asking a lot, though. Ideally, he’d be able to handle third line minute roles as a center, but without any other changes he wouldn’t have any good linemates; if you make him a winger on Eichel or O’Reilly’s line, you’re still lacking depth across four lines.

So enter Alex Nylander, the Sabres’ first round pick from two seasons ago, who also impressed – though to a lesser degree than Mittelstadt – at the World Juniors. Nylander has a laser shot and pulled the strings for the Swedish power play throughout the tournament. Over in the AHL, he’s put up 6 points in 15 games after starting the season with an injury, and he’s one of the younger players in the league. With all that being said, however: Alex Nylander does not look like he gives a shit, at all. Even playing for his home country, he floats around the ice, making lazy plays, and despite that he was able to put up points among his age group with his otherworldly skills. But he plays as lazily as dumb Sabres fans think Eichel does. That kind of thing won’t fly in the NHL, though, and it’s barely flying in the AHL.  Maybe he just needs some more time to recover from a pesky groin injury, but it looks like he also needs some sort of attitude change. Good thing the Sabres have been so good at developing prospects over the past couple of years! (Wait….)

I haven’t even mentioned the Sabres defense yet; they’re also very bad. Marco Scandella was a nice pickup, but he’s probably a 2/3 guy on a good team. Same goes for – and I’m gonna step on some toes here, but whatever – Rasmus Ristolainen. He’s a talented offensive defenseman, but barring some quantum leap, he is not, and is never going to be, a number one guy who dominates on both ends of the ice. Jake McCabe is a solid 3/4, and same goes for Nathan Beaulieu and Viktor Antipin, though the coaching staff seems to prefer dressing Josh Gorges or Justin Falk on a nightly basis rather than the two new guys. Zach Bogosian – it’s never gonna happen. And while Brendan Guhle would help, he’s probably another guy who projects out to be a second pairing defender on a good team. While the Pittsburgh Penguins are a model of a team that has been successful without a great defense corps – they won the cup without Kris Letang last season – they also had Sidney Crosby and Evgeni Malkin and a red-hot goalie. The year before, they basically rode Letang to a Stanley Cup with a less than stellar supporting cast. So the Sabres need to either keep adding solid defensemen to make a whole-is-better-than-the-parts corps, or they need to get a bona fide number one defenseman. Both are difficult paths, and they’re both going to take some time.

Oh yeah, they don’t have a long-term goalie, either. Chad Johnson has looked absolutely lost this season, and Robin Lehner… well, Robin Lehner is weird. He’s putting up a basically league average save percentage right now, and he regularly keeps the Sabres in games despite facing a barrage of shots… but I’ve never been less confident that a goalie will make a save than Robin Lehner. It’s profoundly dispiriting to go into an overtime or shootout almost certain you’re going to lose. I would put very little blame on Lehner this year – he plays behind a tire-fire of a team – but I also wouldn’t want to go long term with him.

Also, are we sure Phil Housley is a good coach? He’s ruined last year’s league best power play in the span of half a season. I know, I know, we ought to give him some time, but man, the team looks lost out there. Like, on a fundamental level, this team barely functions night to night.

I also have to question Jason Botterill a little bit, though it’s more a question of optics rather than procedure. If Botterill wanted to have his best NHL roster, he’d have guys like Guhle, Bailey, and Smith up from Rochester already. Instead, he’s tacitly admitting that the atmosphere of the Sabres sucks right now and keeping those guys on the more successful Amerks roster. So it certainly seems like Botterill knew that the Sabres wouldn’t be competing, though it wasn’t like he was going to come out and say that to the media. Letting prospects marinate is usually a luxury that good teams can take – the Red Wings did this for years – and while it’s admirable in theory, those kids have to make the jump sometime. I guess Botterill is pushing it all to next season.

So, the lottery is the best hope, and even that’s a percentage play. If we all sell our souls to the devil and the Sabres actually win the lottery – and we all know Edmonton is going to win anyway – they’d be in line to select Swedish defenseman Rasmus Dahlin, who looks truly special, and would be in line to solve the number one defenseman problem. If they won the second or third spot, they’d be in line to select Filip Zadina or Andrei Svechnikov, big European wingers who can really shoot, or a defenseman like Quinn Hughes. All those guys are solid, but likely wouldn’t be NHL ready by next season, helping the pipeline but not doing much for the big club. So tie your hopes to a lottery win, because that’s about all to look forward to in the immediate future.

The Sabres getting better, when (if?) it happens, is going to happen slowly. They have a franchise player in Jack Eichel, who has raised his game to become one of the best 5 on 5 producers in the league – exactly what you wanted to see from him on a personal level. You’ve got Ryan O’Reilly, a top 30 center in the league. But the rest needs to be filled out. It’s going to take a couple of prospects making the leap to solid NHL players in the coming months and seasons. Luckily, the Sabres have built some depth in their system, but it’s no guarantee. Mittelstadt looks like a sure thing; beyond that, we’re hoping on a couple of Nylander, Guhle, Justin Bailey, Nicholas Baptiste, CJ Smith, Rasmus Asplund, Hudson Fasching, Victor Olofsson, Cliff Pu, Marcus Davidsson, or Will Borgen to make it. Jason Botterill needs to make smart decisions in free agency and on the trade market – especially with the upcoming decision to trade or try to resign Evander Kane – to build up this roster, focusing on adding speed and quality across all levels. And, most frustratingly of all, they’ll need some breaks going their way before they’re average, let alone a contender, again.