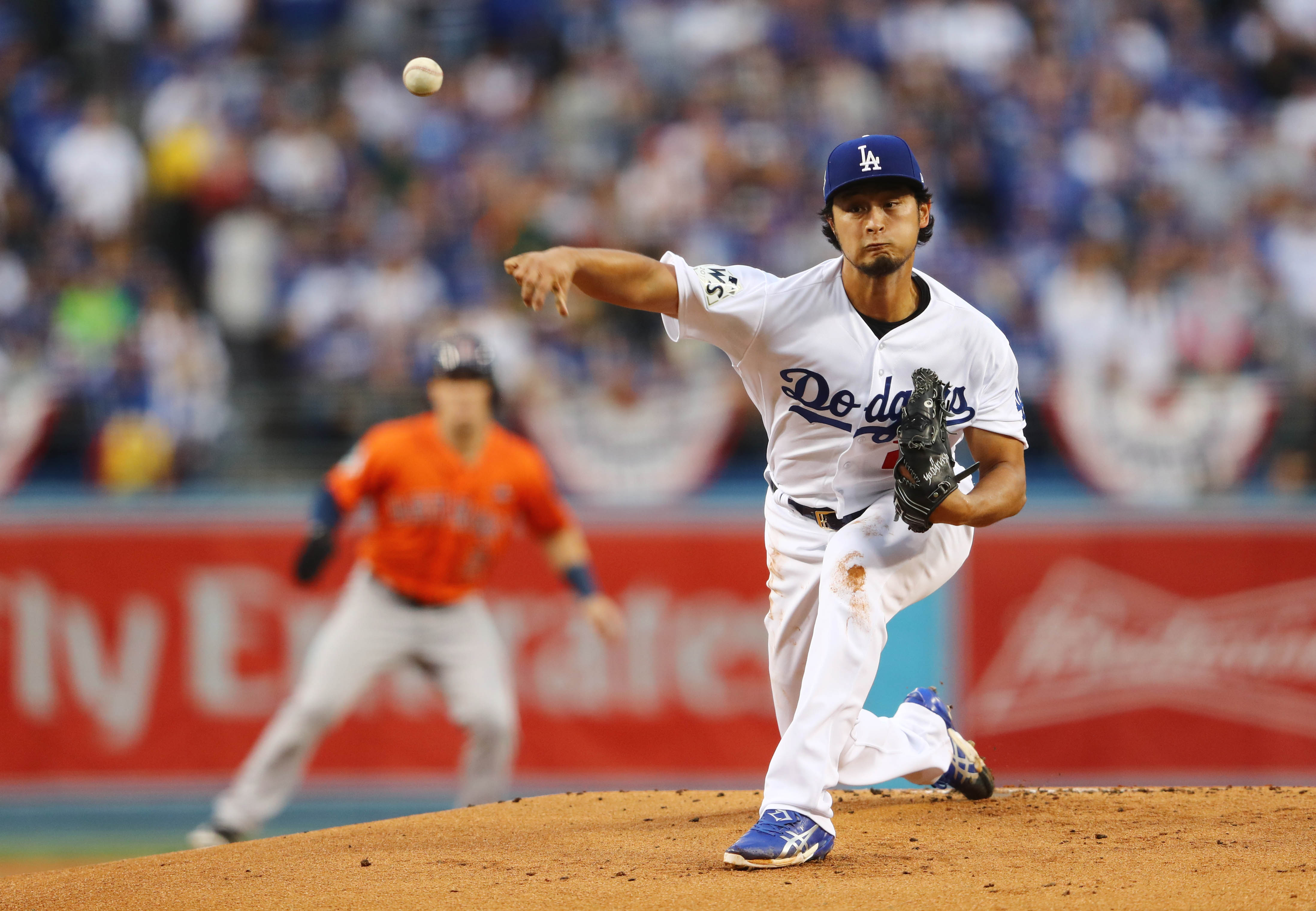 You wanna know how slow this offseason has been? It’s so slow that we don’t even wait for a player to sign to consider it newsworthy — just them narrowing down their list of potential suitors is enough.

There isn’t a team that wouldn’t want Darvish in their rotation, his rough World Series performance notwithstanding. He’s accumulated at least 3.5 fWAR in four of his five big league seasons, with the one outlier being a 2.7-fWAR performance in 100.1 innings during 2016, his first action after returning from Tommy John surgery. While he did struggle at times last year, he still managed a 3.86 ERA (off the strength of a 3.71 SIERA) with a strikeout rate (27.3%) and walk rate (7.6%) that were right in line with his career norms.

It wouldn’t be right if we didn’t have a mystery team, though. Darvish seemingly confirmed his interest of those five clubs on Twitter, but also stated that one more is still in the running. So now that we know who virtually all of the finalists are for his services, which ones appear to be the best fit?

The Astros are still basking in the glory of the franchise’s first World Series title, and based on their current roster, these guys aren’t going anywhere. Despite not having any glaring holes in the 2018 rotation, Houston is still on the hunt for a top-of-the-rotation starter, which came straight from team owner Jim Crane’s mouth.

Doing so would not only be beneficial for this upcoming season, but also beyond. Dallas Keuchel is due to become a free agent next winter, and who knows what that trip into free agency will bring for the Scott Boras client. Making some kind of splash now will protect Houston from potentially losing their left-hander a year from now.

Although it didn’t happen Wednesday, the Astros apparently would prefer to make a trade for Gerrit Cole instead of commit more money and years to Darvish, per Ken Rosenthal. While this is a very specific report with regard to the players involved, we can imagine that making a trade is their preferred option for an upgrade.

This is a pretty easy one, right? Darvish broke in with the Rangers and starred for the team from 2012 all the way up to the non-waiver trade deadline this past season, which led to him getting dealt to the Los Angeles Dodgers. He had a good experience with the organization and is familiar with the surrounding area, which are things players don’t always have the luxury of receiving in free agency.

Plus, the Rangers could really use some starting pitching help despite already making three lower-profile signings this winter. Doug Fister, Matt Moore and Mike Minor have been acquired by Texas to help revamp their rotation, but they all come with varying levels of concern. Let’s not overlook the fact that Cole Hamels is in decline and Martin Perez will at least miss the start of the year thanks to an offseason shoulder injury.

The Rangers are toward the bottom of this list because in that same report from Jeff Wilson, he casts doubt of a deal actually coming to fruition due to the front office’s unwillingness to spend at the top of the free-agent market. The two reasons cited include waiting for the farm system to mature while also opting for next winter’s crop of available players.

A reunion between these two could potentially happen if Darvish doesn’t find a deal to his liking and he’d rather take a one-year contract in a familiar place before trying again next offseason. However, that happening seems unlikely at the moment.

The Yankees don’t necessarily need another front-line starter, but the Evil Empire is back, y’all. After nabbing Giancarlo Stanton in a trade with the Miami Marlins, New York has been poking around the top of the trade and free-agent markets for another hurler. A lot of their attention has been on Cole and the Pirates, although it seems as if they’ve abandoned that plan for now.

If we combine that with news of them being included as one of Darvish’s finalists in the same day, maybe it’s a sign for general manager Brian Cashman to shift his focus.

Their projected Opening Day rotation (per Roster Resource) includes Masahiro Tanaka, Luis Severino, Sonny Gray, CC Sabathia, and Jordan Montgomery. With theoretical holes at both third base and second base due to trading away Chase Headley and Starlin Castro, there at least need to be insurance moves made in case Gleyber Torres and/or Miguel Andujar aren’t ready just yet.

There’s also the whole staying under the luxury tax threshold thing — Jon Heyman reported almost two weeks ago that the Yankees will seriously consider the right-hander if his asking price drops. New York could do what they do and pony up the dough anyways, but there are other teams that could be willing to offer more.

The Cubs have already made an addition to their rotation by signing Tyler Chatwood, and while Mike Montgomery could slide into the back end of the starting staff for 2018, that hasn’t stopped Chicago from looking for alternatives. They’ve been linked to Alex Cobb for most of the winter, but nothing has seemingly happened because his $20 million per year asking price is simply too high.

However, it’s not as if Theo Epstein and Jed Hoyer aren’t willing to spend some cash. Bob Nightengale of USA Today reported about a week ago that they could be willing to go as high as four years and $110 million to re-sign Jake Arrieta. So if that kind of money is there for him, we’d have to imagine it’d be available for Darvish, as well.

Although Montgomery brings some level of uncertainty in the fifth spot of their rotation, they’re not in a position where they need to panic and overpay. We just touched on how comfort level could play a role for Darvish if he doesn’t find the right deal, and that works the other way around, too.

If the Cubs wait out Arrieta enough and he doesn’t get the number of years he’s looking for, maybe he’ll end up going back to the Windy City. And if Cobb has to lower his asking price, maybe he’ll prefer to be reunited with his old manager in Joe Maddon and pitching coach in Jim Hickey.

The Twins went from being a 100-loss squad to a playoff team in the span of a year, but their rotation could really use some help. Ervin Santana and Jose Berrios led the way, but they were also the only hurlers with at least 15 starts last year to post an fWAR above 1.1 while owning an ERA below 4.00.

Minnesota’s 7.7 cumulative fWAR as a rotation was only better than eight other units in 2017, with the next-closest playoff team being the Colorado Rockies (11.7).

Comfort level has been noted here multiple times already, but Darvish does have a Rangers connection in the Twins front office with Thad Levine. Minnesota is reportedly willing to pay market price for his services, and it also helps that the organization has a ton of future payroll flexibility, including no guaranteed contracts currently on the books for 2020.

Despite being in a unique position to spend at the top of this winter’s free-agent market, it’s not something we’re used to seeing the Twins do. The allure of heading to a team with a better chance of going deep into October — i.e. the Cubs and Yankees — could also sway Darvish in another direction, so Minnesota may have to pay up if they really do want him. It’s also cold in Minneapolis.

Honestly, though, this fit appears to make the most sense among those we know who are still in the running. The mystery team could change everything, so we’ll just have to wait and see what happens.