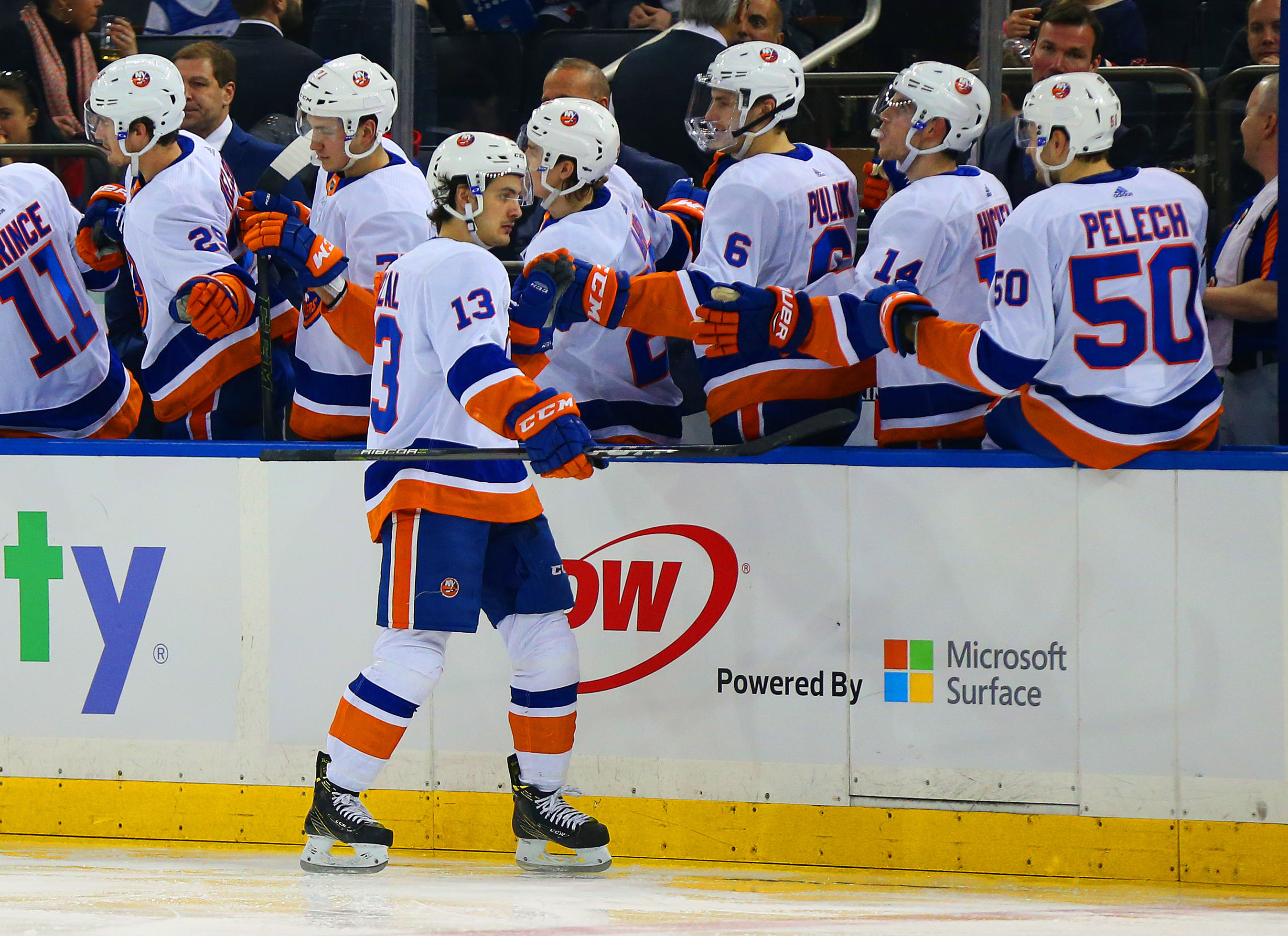 NEW YORK — Mathew Barzal had a five-point night, Jordan Eberle had a four-point night, Anthony Beauvillier had two goals and the Islanders downed the New York Rangers 7-2 in their first game since they ended a week-long break.

Beauvillier scored the game’s opening goal 6:06 into the first period to put the Islanders in front 1-0. The goal was his second in as many games.

The Rangers evened the score at one off a power-play goal from Kevin Hayes at 14:25, but the Islanders regained the lead after Shane Prince scored on a breakaway two minutes later. Mathew Barzal gave the Islanders a 3-1 lead when he scored 37 seconds into the second period.

Barzal scored his second of the game before the five-minute mark to put the Islanders ahead by four goals. Beauvillier followed that up with his second goal of the game at 6:51.

Mika Zibanejad scored the Rangers only other goal at the 9:05 mark of the third period, but Thomas Hickey and Cal Clutterbuck wrapped things up with goals late in the third period.

1. Coming out of a week-long break, Saturday afternoon’s game could have been ugly. The Islanders had gone into the break on a positive note, but that could have easily been undone with so much downtime. Instead, a beat up Islanders group blitzed the Rangers with five different players scoring, two of whom had multi-goal games and five players had multi-point games. It was about as good of a start as the Islanders could have asked for against their Manhattan rival.

“Well it’s big just because of the situation we’re in in the season,” Shane Prince said. “We have to start winning games and stringing them together in clumps. We knew that we wanted to come out of the break on a good note and we did.”

2. There were several outstanding performances on Saturday and it would a shame not to start with the play of Mathew Barzal. The Islanders’ rookie has been phenomenal and displayed every ounce of the skill that he had against the New York Rangers. The five-point effort was Barzals’ second of the season and just the ninth to occur this year in the entire NHL.

His two five-point games also put Barzal in some pretty historic company, becoming just the second Islander rookie to accomplish the feat. The other player is Islanders’ legend, Bryan Trottier.

“It was a great team effort honestly,” Barzal said about the afternoon. “Beau comes in, works hard, wins all his battles and Ebs you know, making skill plays. A little water bug up there so, just one of those nights where everything kind of finds its way into the back of the net.”

3. The Islanders second line was unstoppable, finishing the afternoon with a combined 11 points vs. the Rangers. Beauvillier, who had four points, recorded his first multi-point game since October 28 against Nashville and had his first multi-goal game of his career. The four assists for Jordan Eberle were a career-high as well.

4. Whatever happened in the AHL has really helped Anthony Beauvilier to regain his confidence on the ice. Beauvillier has looked like an entirely different player out there and it has shown on the scorecard. The rookie has scored in consecutive games for the first time since last season when he scored on March 9 against Vancouver and then again on March 11 in St. Louis.

“He’s just looked like a different person,” Islanders head coach Doug Weight said. “In his eyes. Just in his meetings and we know what kind of character he is. That’s why he made the team at 18-years-old.  We trusted that he’s just got compete, he’s got speed and a real willingness and leadership type of thing in him at a young age.

“We have to keep working with him, but obviously he was one of the better players on the ice today. He was in command of his game and very confident.”

5. “It’s always fun to play the Rangers, especially here, and it’s been a good game for us. Coming back from the break and just build off that last game against New Jersey. We played a great game.” — Beauvillier on Saturday’s win

6. Another player who deserves a lot of credit for the win; Jaroslav Halak. The Islanders netminder stopped 37 shots and only allowed the Rangers to score twice. This all occurred despite the fact the Islanders’ defense struggled again during the second and parts of the third period. Halak stepped up to make a number of crucial saves, including during a four-minute span in the second period when the Islanders could not get out of their own zone.

Halak hasn’t seen less than 35 shots against since December 13 and saw 46 shots in the Islanders win over New Jersey. The Rangers put 39 shots on goal on Saturday. The Islanders have needed Halak to step up in big moments, especially with a depleted defensive group that was already struggling before they lost Johnny Boychuk and Calvin de Haan to injury.

“He just came up with big save after big save in a four, five-minute span there,” Weight said. “Kind of defeated them a little bit. Those are the flurries, those are the saves. He was absolutely in charge of his game… Having him back there and playing the way he did it’s exciting and we have to keep going.”

7. The only downside of the Islanders win was that the injury bug struck again. The Islanders lost Casey Cizikas to an upper-body injury. The Islanders are already down two forwards in Josh Bailey and Andrew Ladd and from Weight’s comments after the game, it sounds like Cizikas could miss some extended time from the injury.