Quarterback Alex Smith #11 of the Kansas City Chiefs runs up field during the second half of the game against the Tennessee Titans at Arrowhead Stadium on January 6, 2018 in Kansas City, Missouri. (Photo by Peter G. Aiken/Getty Images)

The Kansas City Chiefs lost to the Tennessee Titans in the Wild Card round of the playoffs in heartbreaking fashion, after they held an 18 point lead. Their quarterback, Alex Smith, has only one year left on his contract (due $17 million) and the Chiefs traded up in the 2017 NFL Draft to select Patrick Mahomes with the tenth overall pick. Even though the Chiefs loss wasn’t Smith’s fault (it was the coaching staff’s) it is entirely possible that Smith is not on the Chiefs roster at the beginning of the 2018 season.

Try to determine where a quarterback like Alex Smith might end up can seem completely random and unpredictable.  But just like any good gambler knows, there’s a way to make good bets with safe odds.  Having a resource like Slots Adviser to act as your online slots casino guide is an invaluable tool.   And on that note, we’ll be sorting through the randomness ourselves.  Here are some potential landing spots, in no particular order, for Smith.

The Cleveland Browns just finished the 2017 season with an 0-16 record (only the second team in NFL history to do so) and they have been looking for a quarterback for forever. It doesn’t appear that any signal caller currently on their roster (including DeShone Kizer) is the answer.

John Dorsey, the Browns general manager, traded for Smith when Dorsey was with the Chiefs, in a deal he made with the San Francisco 49ers in 2013, so Dorsey obviously thinks highly of Smith. The Browns have a trove of picks in 2018, including three in the second round so they could certainly package something and make an offer to the Chiefs. Of course the Browns would need to surround Smith with more talent at the skill positions, particularly wide receiver, than they currently have, but under Dorsey’s watch, that could actually happen. Plus, the Chiefs and Browns play in different divisions.

Carson Palmer announced his retirement and the Arizona Cardinals now need a quarterback that can put their offensive weapons (especially David Johnson) to good use. Drew Stanton is not that guy. The Cardinals must acquire a new quarterback, either via trade, free agency or the draft. If they feel that the quarterbacks who are/will be available in the draft or free agency don’t work for them, or a rookie quarterback won’t be ready to start in 2018, it is entire possible that the Cardinals pick up the phone and try to make a deal with the Chiefs for Smith.

Smith is 34, but he could play in Arizona for a few years, and help the Cardinals make the playoffs and possibly a run in the postseason, while the team tries to figure out their future at quarterback. If the Cardinals want to compete in the NFC West they need a signal caller who can help the team match the output of Jared Goff, Russell Wilson and Jimmy Garoppolo. Also, for trade purposes it helps that the Chiefs and Cardinals aren’t even in the same conference. The Chiefs would have zero issue in sending Smith to the Cardinals.

Tyrod Taylor was inexplicably benched this season in favor of Nathan Peterman, but Peterman threw five picks and got hurt and Taylor once again took over the starting job. Taylor did help end the playoff drought in Buffalo, but he’s clearly not in the Bills future plans. Taylor is due a $6 million roster bonus once free agency starts in March and his cap hit in 2018 is $18 million. The Bills will most likely move on from Taylor this off-season.

The Bills could obviously trade up and draft a quarterback, but then they would have to hope their rookie quarterback would be ready to start the season or they’d have to pick up another salary cap friendly quarterback as a bridge (Peterman isn’t the answer) until the quarterback they drafted is ready. That’s too much uncertainty when the Bills have some talent and could possibly make the playoffs again next season in the weak AFC if they have an answer under center.

Trading for Alex Smith makes more sense than trading up in the draft. Smith and Taylor are due roughly the same in salary next season and Smith would be an upgrade from Taylor. And Smith’s style and athleticism that he has displayed in this time in Kansas City would actually work in Buffalo.

Blake Bortles simply isn’t good enough to take the Jacksonville Jaguars to the Super Bowl. Somehow, in spite of Bortles, the Jags have made it to the Divisional Round, where they will take on the Pittsburgh Steelers. The Jaguars have one of the best rosters in the league, except at quarterback. Jacksonville went 10-6 this season even though Bortles is one of the worst quarterbacks in the league. The Jags are going to lose to the Steelers on Sunday and it will because of Bortles’ play.

If Jacksonville had someone of Smith’s caliber under center they would be the favorite in the AFC this postseason The Titans have no shot at representing the AFC in the Super Bowl and outside of the position of quarterback the Jags are better than both the New England Patriots and Steelers. The rest of the teams in the AFC should hope that Smith doesn’t end up in Jacksonville this off-season, but he could, especially with the Jags playing in the AFC South and the Chiefs residing in the AFC West. 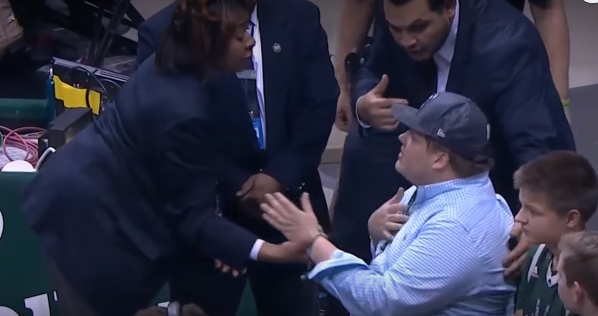 Fan ejected from game for shouting profanities at Klay Thompson

A little bit of heckling from fans is to be expected during games, but one particular man appeared to cross the line during Friday’s Warriors-Bucks...