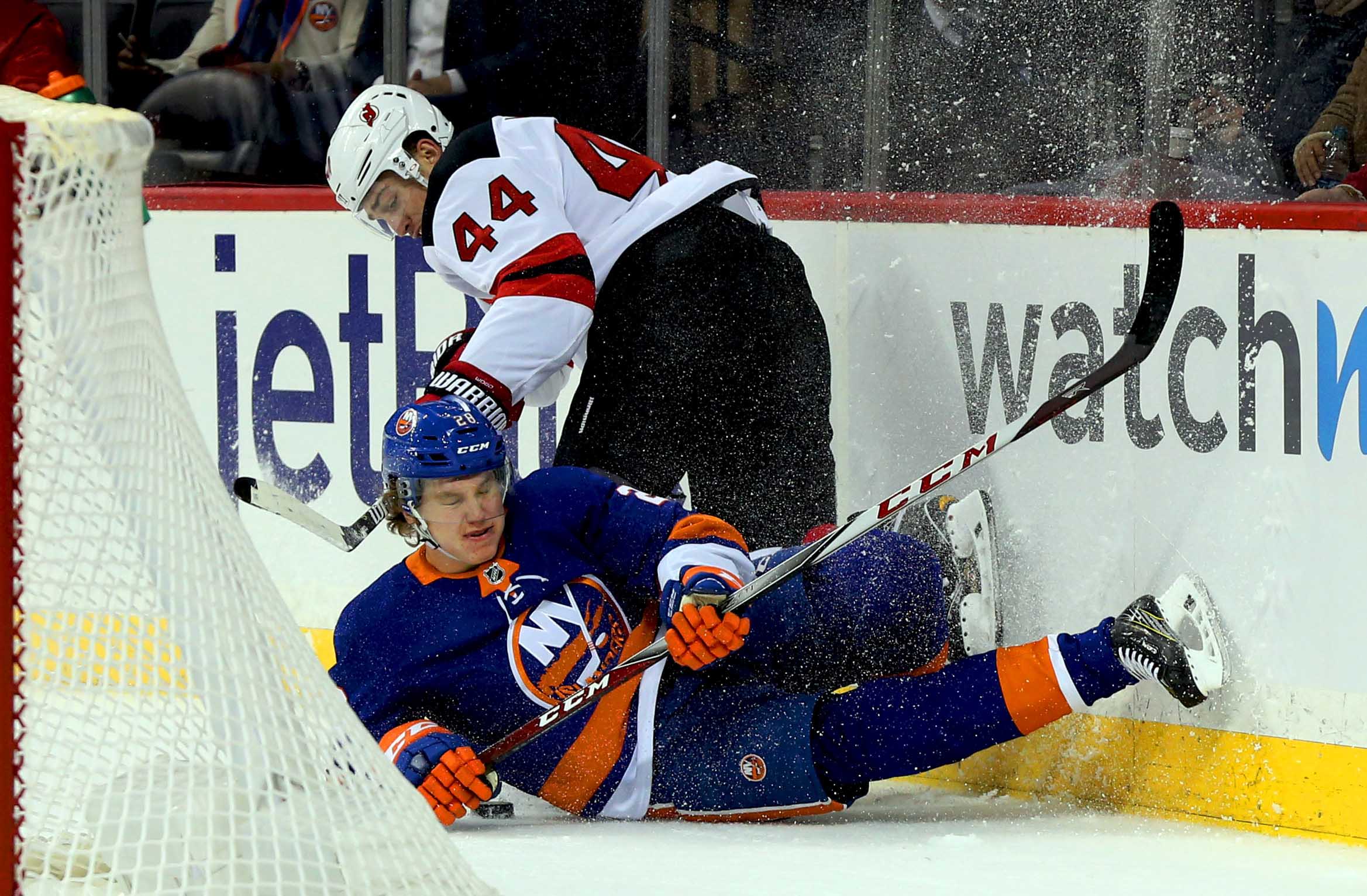 NEW YORK — The Islanders good fortunes came to an end on Tuesday.

A day after the Islanders stole two points in an overtime win over the Montreal Canadiens, New York saw a three-game winning streak snapped in a 4-1 loss to the New Jersey Devils at Barclays Center. It was the second time in the last 10 days that the two teams played one another.

Unlike the last time, however, the Islanders couldn’t dig themselves out of a hole on Tuesday and allowed three goals in the third period to turn a 1-1 tie into a 4-1 deficit. It was the second straight game that the Islanders surrendered 30 or more shots through the first two periods.

“It was a tough draw,” Islanders coach Doug Weight said. “I think we were pretty mentally tired early. That was pretty evident with some of our decisions. First shift I think we had shown three or four things that we were going to be diligent on. One was the forecheck and I think we did an OK job with not too many odd-man rushes and having a third man in tracking pucks… I think Matty just ran out of position right off the bat and we ended spending four or five minutes chasing around.

“Leaving the zone quick, so we didn’t do a great job of managing the game early.”

It was another frustrating night for the Islanders as the Devils controlled the pace of play for most of the game and put 42 shots on net by the final buzzer. While that was down from the 56 shots the Islanders gave up the night before, it was the second time in Jaroslav Halak’s last three starts that he has faced 40 or more shots.

Halak finished the game with 38 saves.

“It’s going tough to win games and sustain that kind of attack that we’ve had the last two nights,” said Anders Lee, the Islanders only goal scorer on Tuesday. “All those shots, tough on our goalies and tough on our defense. Just two nights in a row we’re getting swarmed. We escaped one last night and tonight just wasn’t in the cards to be able to pull something off like that again.”

It was a low scoring night for the Islanders’ offense, which was held to one goal for the first time since their five-game losing streak was snapped. The Islanders had scored 17 goals in their last three games combined entering Tuesday.

The Islanders had managed to hold off the Devils until 12:58 mark of the second period when Damon Severson scored his first of two goals against the Islanders. Stefan Noesen knocked Nick Leddy off the puck in the corner and sent a pass to Brian Gibbons, who had his shot from the slot stopped by Halak.

The rebound went to Severson and the Devils’ forward fired the puck into the net.

Severson found the back of the net again less than two minutes later after Alan Quine failed to clear the puck from the Islanders zone and the Devils took advantage. Taylor Hall deflected the Quine clearing attempt to hold the puck in the zone and after several passes made its way to Severson, who beat Halak again.

Another miscue with the puck, this time by John Tavares, led to a turnover that allowed Hall and Nico Hischier to break out into a two-on-one rush. Hall’s shot trickled through Halak and went in to put New Jersey up by three.

“I think when you’re trying to do too much at times it gets us away from our identity of our team and what breeds success,” Tavares said. “Obviously these last couple of games we’ve gotten away from it a little bit… Mistakes are going to happen, I mean I make more mistakes than anybody. It’s just going out there and finding a way to build off our momentum.”

The loss, coupled with the New York Rangers 5-1 win over Philadelphia, dropped the Islanders back out of a wild-card spot. They sit one point behind the Rangers and Pittsburgh Penguins.

The Islanders also took another hit to their already depleted lineup. Shane Prince left Tuesday’s game with an upper body injury, but there was no update on him after the game.

“I did not see it. I imagine maybe it was from the hit that he laid on Gibbons,” Weight said. ” I don’t know. I just turned around and he was off the bench.”

For the fourth straight game, the Islanders scored the opening goal against an opponent. Lee scored 1:39 into the game to put the Islanders ahead 1-0, but Kyle Palmieri tied the game at one with his goal at the 15:20 mark.