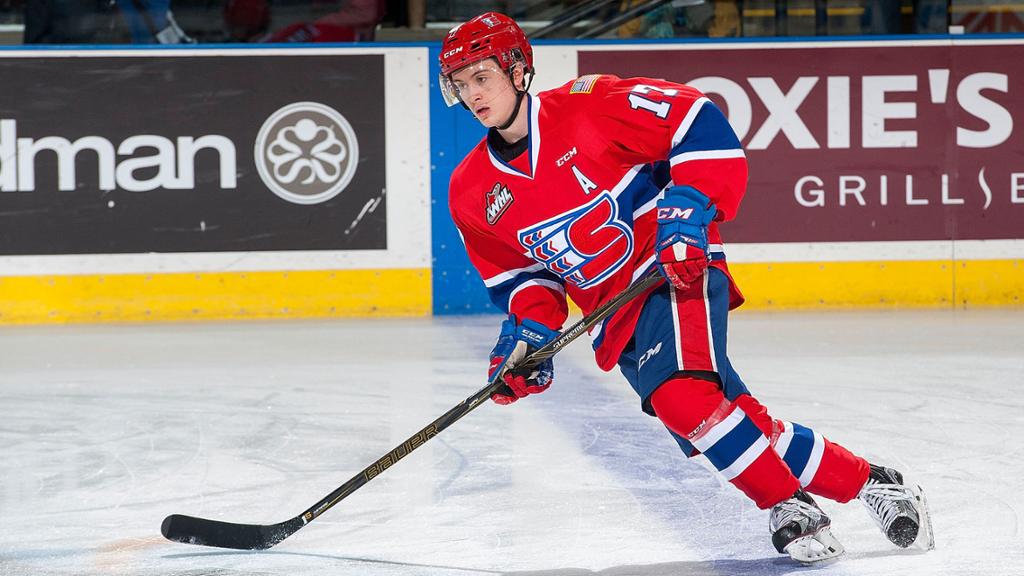 No Oilers hockey until Saturday night, so we’ll need to get our fix elsewhere this week my friends. The good news? This will give us a chance to check up on the prospects in the minor league system and in junior hockey.

So, without further ado, let’s take a look down on the farm and in the pipeline, shall we?

A lot of talk about the lack of forward prospects in Bakersfield, and I will admit it is quite disturbing. Only Patrick Russell, Kyle Platzer and Joey LaLeggia would count as prospects in my books, and none of those three are high quality prospects.

Things will get better with Tyler Benson and Cameron Hebig coming into the fold next season, but Edmonton absolutely has some work to do here. As for the here and now….

Ty Rattie is leading the way with 16-12-28 in 37 contests and will be Bakersfield’s lone rep in the AHL All-Star Classic in Utica later this month. Rattie scored a nice overtime goal on Saturday night against Rockford, and for my money he is the best forward on the Condors’ roster by a wide margin. I think he’s positioned for a call-up in the season’s second half.

Russell has 7-7-14 on the season, while LaLeggia is second on the team in points with 7-17-23 in 37 games. Not bad for a player playing in just his second season as a pro forward after playing defense in college and his early pro days.

Defensively, Caleb Jones paces the group points wise with 1-12-13 in 37 games, while Ethan Bear has 2-8-10 in 21 contests. Bear is healthy and back in the lineup, so that’s a great sign moving forward. Both he and Jones, by all accounts, have had their ups and downs this season but are playing better hockey now than in October. That’s the goal for these two, growth in their first pro season. I’d wager these two are the biggest story in Bakersfield and will be worth watching the rest of the way and into next season.

Ryan Mantha (3-6-9, +3, 35 GP) is also developing quite nicely in his rookie pro season and could be a defensive dark horse on the right-side moving forward.

Laurent Brossoit has been good since returning, going 2-1-1 with a .923 SV% and 2.37 GAA. He’ll need to be strong down the stretch if he wants to get qualified by the Oil this summer. Nick Ellis has had an okay run this season, going 8-7-2 with a .907 SV%. You’d like to see that save percentage a little higher in his second season.

Edmonton doesn’t have much in terms of prospects at the ECHL level, but there are some interesting names at forward. Rookie camp invite and former Oil King Lane Bauer has 8-19-27 in 34 games and could be a candidate for an AHL contract next season. Bauer has seemingly been on Edmonton’s radar for a few years and has looked good in the ECHL this season.

AHL contracts Evan Polei (8-8-16, 31 GP) and Chad Butcher (4-10-14, 24 GP) haven’t adapted as quickly as Bauer and likely haven’t produced to the hopes of the Oil. Butcher was awesome in Penticton back in September, while Polei was a strong scorer in the WHL. They’ll both need strong second half pushes to be back in the AHL fold for next season.

As for the lone real Edmonton prospect, Shane Starrett has done quite well as a rookie pro. He’s gone 12-4-3 with a .921 SV% and 2.69 GAA. Starrett also was the Thunder’s lone rep at the ECHL All-Star game yesterday, helping the Mountain Division win the event in Indianapolis.

Tyler Benson has had a very strong season in the WHL, and maybe more importantly a healthy one to this point. Benson has registered 17-24-41 in 32 games and has arguably been WHL Vancouver’s best player this season. He’ll turn pro next fall and, if he can stay healthy, will instantly become Edmonton’s best prospect at the AHL level. He’s had a good season and has quietly begun to prove why the Oil took him so high in 2016.

Kailer Yamamoto hasn’t torn up Spokane like many expected, but he’s still got solid numbers for the Chiefs. He has 3-13-16 in 15 games since heading back from his nine game NHL stint (0-3-3, 9 GP) and helped Team USA (2-2-4, 7 GP) win bronze at the World Juniors. I suspect we’ll see a big second half from Kailer in the WHL, and then likely a turn pro next fall into Edmonton’s lineup.

Kirill Maksimov (25-18-43, 36 GP) might be the best Oiler prospect no one is talking about. Edmonton’s 5th round pick in June, Maksimov has built off his strong second half a year ago with OHL Niagara and has emerged as one of the most dangerous goal scorers in the world’s best junior league this season. He’s got another year of junior to go, but there are some good arrows here.

As a right-shot right winger, Maksimov is an appealing option for the club moving forward as a goal scorer. In fact, he may actually be the best goal scorer in the system right now.

Ostap Safin (14-19-33, 34 GP) has had a nice start to his QMJHL career. He’s slowed down a bit, but the 6’4” power-forward has potential and some good arrows. Cameron Hebig (31-28-59, 42 GP) was recently traded to Regina of the WHL and will play in the Memorial Cup this spring. Hebig turns pro next season and will be an interesting player to watch. I’ve liked what I’ve seen since he was signed to an entry-level contract.

The Rest Of The World:

Aapeli Rasanen had a really impressive World Junior (4-0-4, 5 GP) for Team Finland and has played a good role at Boston College this season. Rasanen has 3-7-10 in 18 games for the Hockey East’s best team in his freshman season. Don’t be alarmed that the numbers aren’t eye popping, freshman don’t play a ton in the NCAA. Rasanen’s season has actually been quite good.

Speaking of BC, Graham McPhee has played a much bigger role in his sophomore year and it is showing. The 2016 5th rounder has already passed his point total of last season (ten) in 16 less games. He’s 8-7-15 in 23 contests and playing more offensive minutes. Across town at Harvard, John Marino has six assists in 17 games for the Crimson but isn’t getting much powerplay time due to the presence of Adam Fox on the blueline.

Elsewhere, Philip Kemp has 1-3-4 as a freshman at Yale and nearly made Team USA’s entry at the World Juniors. He’s pretty far off, but it has been a nice start for him as a prospect.