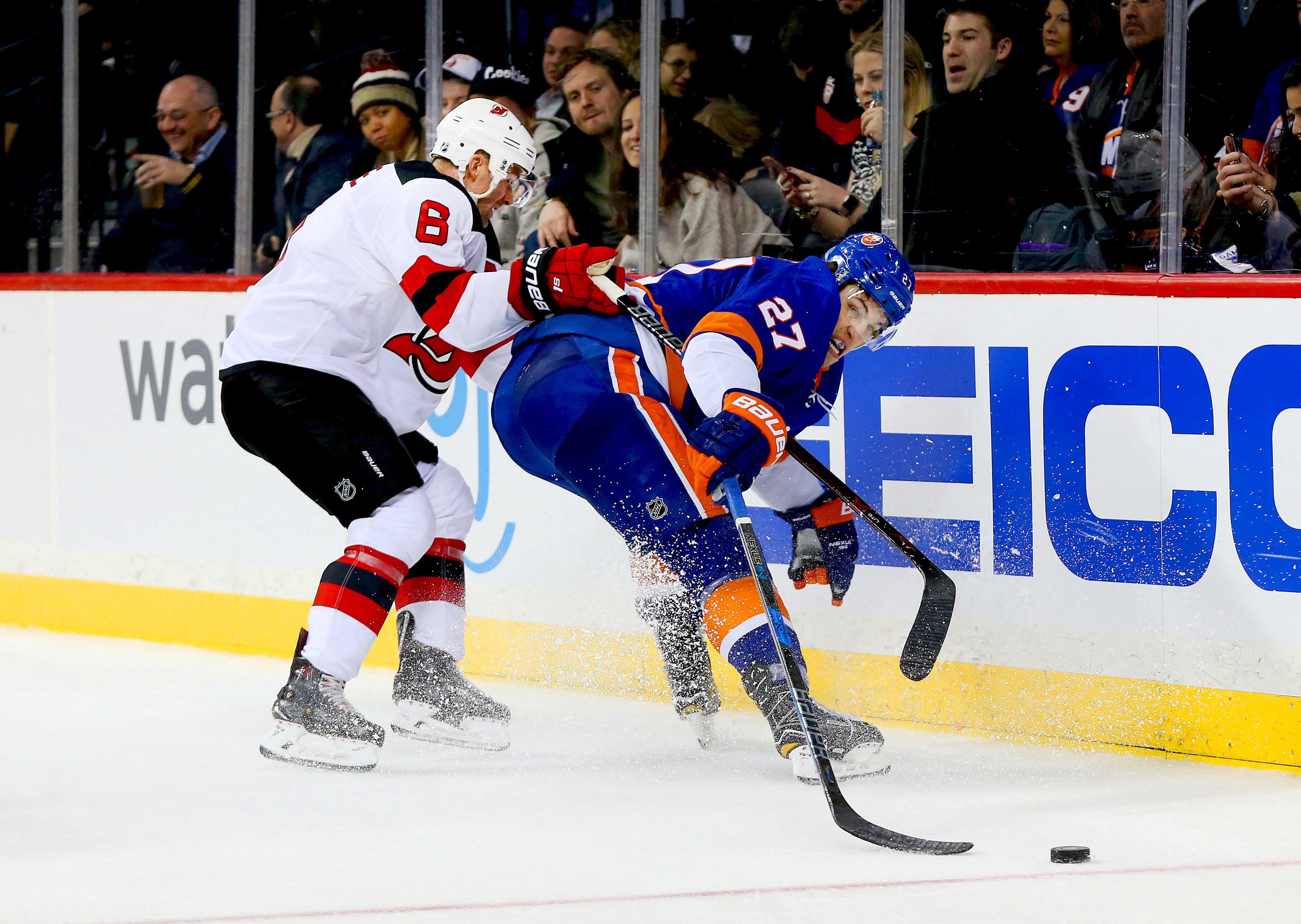 NEW YORK — The New Jersey Devils scored three times in the second period to blow open a 1-1 game and come away with a 4-1 win over the Islanders. The Loss snapped a three-game winning streak snapped and dropped them back out of a playoff spot. There’s still time to bet on the Islanders to make the playoffs.  If you use a foxy casino promo code to make your bet, then you’ll get a chance to win even more cash if the Islanders win their next game.

Damon Severson broke the ties at the 12:28 mark of the second period with his first of two goals to put New Jersey up 2-1. He scored again moments later give the Devils a two-goal lead and Taylor Hall scored in the final five minutes of the period to make it 4-1.

Kyle Palmieri also scored for the Devils, while Anders Lee scored the Islanders only goal of the night.

1. For the second game in a row, the Islanders were outplayed for the better part of a 60-minute contest. The Islanders were able to squeak out a win over the Montreal Canadiens, but the ragtag roster was unable to overcome a rush from the Devils in the second period that led to the loss. It was hard to throw starter Jaroslav Halak under the bus considering that the Islanders allowed 30 shots or more for the second consecutive game he faced 40-plus shots for the second time in three starts.

2. Halak finished the night with 38 saves and had been playing well against a Devils team that was besieging the Islanders in the second period and parts of the first. Halak appeared to be turning a corner by the way he was playing prior to Tuesday’s game and that still appears to ring true despite the loss to New Jersey, but it’s hard to get a win when the players in front of you aren’t giving you much help.

3. What doesn’t help the Islanders cause was the fact that an already iffy defensive team was missing a number of players due to injury. The Islanders remained without Josh Bailey, Andrew Ladd, Casey Cizikas and Johnny Boychuk, and they saw Shane Prince exit the game in the second period with an upper-body injury. No one was using that as an excuse after the game, but it certainly hasn’t helped.

“A little decimated right now, but every team goes through situations like this throughout the year,” Anders Lee said. “We’re no different and the guys have come up and stepped up and filled a lot of those shoes. Just wasn’t our best game by far and obviously on a back-to-back we need to be more clean with the puck.”

4. The last part of that statement could not be truer as the Islanders struggled to do much with the puck for most of the night. They gave away the puck 11 times and several turnovers led directly to a goal. The most egregious was a brutal turnover by Alan Quine that allowed the Devils to hold the zone and led to Damon Severson’s second goal of the night that put New Jersey ahead by two less than two minutes after they took the lead. Quine has not been a fan favorite lately and that isn’t going to change after his performance on Tuesday.

5. Islander fans haven’t been happy with the way the team has played in its own end, and rightfully so. Even before the injury bug bit the team it was an issue that was masked by the fact the offense had been lighting up the scoreboard. Thomas Hickey, who played the third period as a winger after Prince left, certainly understands the fans frustration, but is said the team is working on it.

“It’s a work in progress. I think the coaches can tell you it’s been stressed and it’s difficult when there’s not a ton of practice time,” Hickey said. “I know if I were a fan I understand that the results haven’t been there and it looks like it’s not happening. But it’s a work in progress and we’re trying to get better in our own end. The shots we’re giving up is not a good indicator. We’re working on things and it’s getting better.”

6. Still, a lot of the same mistakes continue to plague the Islanders, even when they win. And Halak has some rather telling comments he made to Newsday about the team’s consistent problems. He told the paper, “If we can’t learn from our mistakes, how can we get better? Teams are just going to be patient and wait for us to turn the puck over and then they get an odd-man rush. It’s too many.” I’m sure there are quite a few fans who would agree with this.

7. “You have to be better. You can’t have three good games and just put aside everything that you’ve done well, and begin to cheat because you get down 1-0 or you’re a little tired… We have to do things on a consistent basis and because of the league that we play in we have to be consistent on those things. We haven’t been and shame on us.” — Doug Weight on team’s struggles

8. On the bright side, Josh Bailey is inching closer to a return. So, that would be one healthy body back in the lineup.