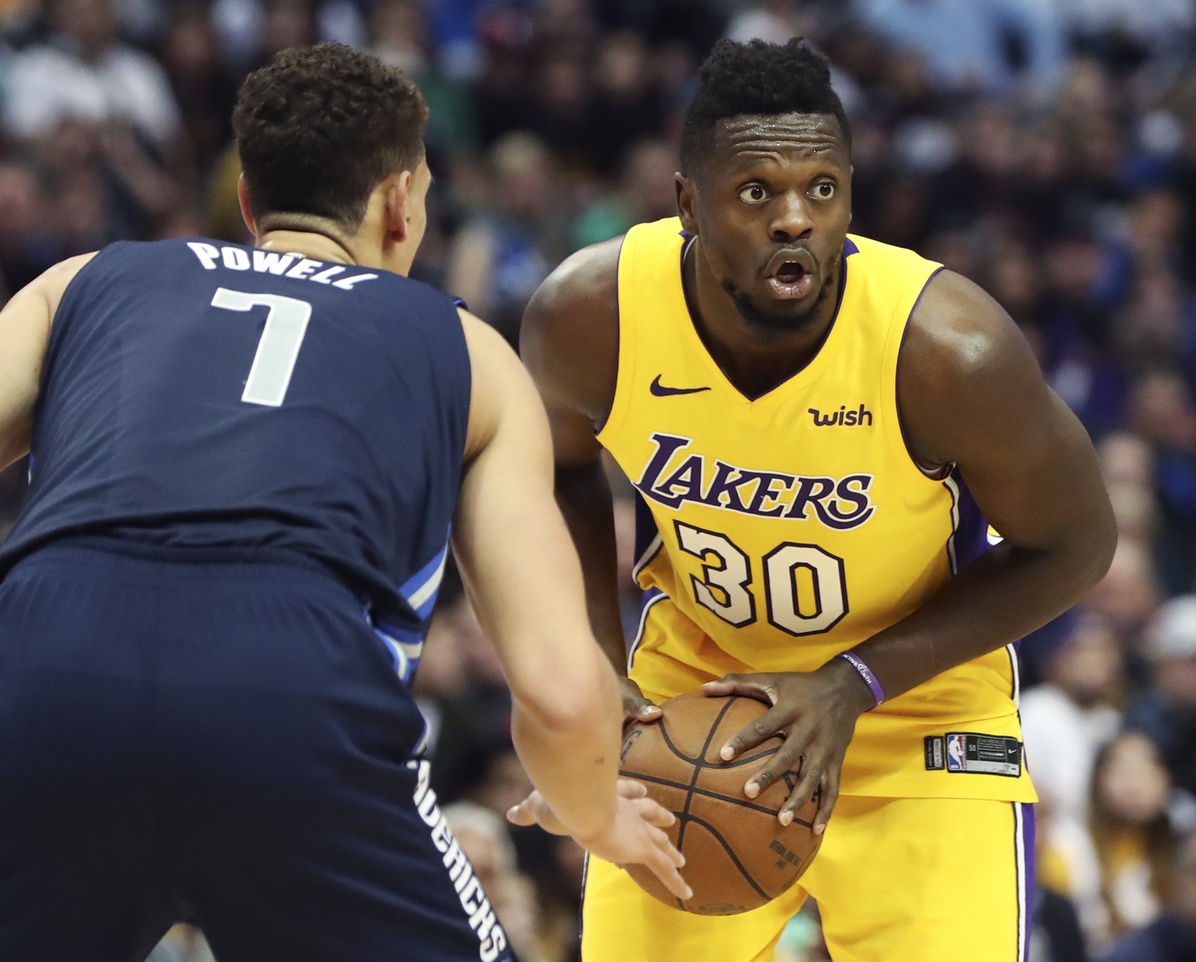 The NBA Trade Deadline (Feb. 8) is rapidly approaching. Three weeks from tomorrow the buzzer will sound, and then there will be no more deals until the summer. Below are five trade scenarios, each of which involves at least one team that’s projected to finish outside of the playoff picture. If you clicked this article hoping for hot takes, you might be in luck. However, don’t expect to see superstars changing squads in this trip to the trade machine.

Detroit (22-20) is holding steady in the eighth spot, and with J.J. Redick expected to miss the next couple weeks, Philadelphia’s playoff odds just took a serious hit. Missing out on the playoffs wouldn’t be bad for the Sixers. Another lottery pick in the pocket. But the Colangelo family might be itching to make a move in hopes of reaching the postseason. Timothe Luwawu-Cabarrot still possesses the potential that made him worthy of a first-round selection back in 2016. However, his progress has been very slow. Kent Bazemore, who turns 29 in July and is on the books for $18.1 million in 2018-19 with a player option for $19.3 million in 2019-20, isn’t as good as Redick from beyond the arc, but the difference isn’t as steep as one might think. Redick is draining 2.7 threes per game on 40.5 percent in 2017-18. Meanwhile, Bazmore is netting 1.6 per night on 39.1 percent, both career-bests.

The truth of the matter is that what Redick brings to the table is tougher for Philly to replace than what star rookie Ben Simmons offers. Neither Jerryd Bayless nor Luwawu is likely to be able to fill J.J.’s shoes, but T.J. McConnell can be relied on to provide playmaking when Simmons sits, as evidenced by his MLK Day masterpiece against the Toronto Raptors. Perhaps I’m being overly dramatic here, but without a trade the Sixers (20-20) can probably kiss their 2018 playoffs hopes goodbye.

But back to Baze: he’s making less money than Redick (who turns 34 this summer and will be a free agent), and provides better defense and secondary playmaking. Kent could prove to be a fine fit, further improving upon his efficiency thanks to the spacing afforded by Simmons and Joel Embiid. It’s not farfetched to suggest that Bazemore is actually a better player than Redick based on his two-way abilities. Embiid, Simmons, Robert Covington and Bazemore would be a terrifying defensive four-some.

The rebuilding Hawks would almost certainly accept such a compelling offer, as they don’t have much use for Bazemore. He doesn’t fit their timeline, but the price for 3-and-D wings should always be steep. A mid-first round pick and a young wing with potential is plenty. Justin Anderson would be the cherry on top, while Booker will be off the books this summer.

As it stands, Stan Van Gundy likely feels less pressure to make a move following Redick’s injury. Nevertheless, should the Sixers add a player of Bazemore’s ilk, that would strike some fear into SVG. Ish Smith is holding his own in place of the injured Reggie Jackson, but George Hill would be an upgrade on both ends. Stan Van hasn’t done well in recent drafts, so shipping a pick for a proven player needing a change of scenery makes sense here. Hill can create for others and boasts a versatile 3-and-D skillset.

Sacramento gladly capitalizes on an opportunity to trade a disgruntled veteran for a first round pick. Boban Marjanovic would only be on the books for 2018-19. Jon Leuer’s contract (about $10 million per through 2019-20) isn’t ideal, but at least he can shoot the three and be a short-term fit at the 4 who provides Willie Cauley-Stein with some room to operate.

Mirotic gets his wish, as Chicago’s front office grants his trade request hoping it helps halt their own team’s winning ways (14-7 since Dec. 8). John Hollinger’s trade analysis subtracts seven wins from the Bulls (17-27), which would supply them with a lot more ping-pong balls in May’s NBA Draft Lottery. Portland aims to solve their problems at the power forward position with a stretch-4 who can open up the half-court offense for Damian Lillard, C.J. McCollum and Jusuf Nurkic. A starting five of those four plus Al-Farouq Aminu (or Mo Harkless) is more intriguing than anything they’ve rolled out thus far this season.

DeMarre Carroll for Omer Asik, Alexis Ajinca and a pair of picks (2018 first round, 2020 second round)

Brooklyn already netted themselves a pair of picks from Toronto (2018 first and second rounders) for simply taking DeMarre Carroll off their hands. Rest assured, if there is a first-round pick to be had, Carroll will be on the table. However, with Carroll turning 32 this summer and only on the books for one additional season, he might not demand the same return as fellow former Atlanta Hawk breakout wing Kent Bazemore. Would the Nets be willing to take on Omer Asik, who assuming he picks up a player option in 2019-20, will collect $23 million over the next two seasons? Ajinca, on the other hand, will be off the books in the summer of 2019. Can the Nets stomach the idea of adding those two centers? Having backed up the Brink’s truck for crab cakes (Allen Crabbe) and football (that’s what Maryland does), Brooklyn might be smart to hoard cap space over the next couple years anyways. Furthermore, this is the last time they’ll be forced to fork over their own first-rounder. Paying the Pelicans’ tab for Asik might be a worthy cause. Brooklyn would be swimming in picks this summer, with two first-rounders and two seconds.

New Orleans (23-20) is not quite as desperate for wings as we (the royal we) make them out to be. Two of their starting “guards” (Jrue Holiday, E’Twaun Moore) sport the length of wings. Darius Miller has developed into a decent role player off the bench. Solomon Hill is supposed to be back at some point this season. And Tony Allen (currently injured) and Dante Cunningham bring grit. However, the chance to add a 3-and-D wing with Hill’s bulk (and better three-point shooting), coupled with a golden opportunity to pass Asik off, is tempting enough for New Orleans to say adios to at least a couple draft picks. Based on the recent signing of DeAndre Liggins, it’s clear that NOLA is still searching for help at wing. Carroll could immediately slide into the starting small forward spot, thus pushing Rajon Rondo to the bench. Or DeMarre could bolster the second unit. Either way, the Pelicans are definitely in win-now mode, so a deal of this nature is far more likely than one involving DeMarcus Cousins.

In their quest to clear cap space for the upcoming free agent class, the Lakers send Clarkson (and restricted free agent-to-be Randle) to Memphis. McLemore is the only non-expiring deal, so L.A. saves a nice chunk of change. I know what you’re thinking, and the answer is yes: Kobe Bryant finally replies to McLemore’s #MambaChallenge request. But no more spoilers on that front.

The Grizzlies (14-28) jump on the opportunity to add a potential fit at the 4 in Randle without giving up JaMychael Green or Deyonta Davis. As a left-handed power forward, Julius was compared to Zach Randolph coming out of college. Or was that just me? Anyways, Randle would have the rest of 2017-18 to show he’s a good fit next to Marc Gasol. Clarkson’s contract isn’t cheap, especially for a guard not known for sinking treys. But he turns 26 this summer, and would have a shot to maximize his talents in Memphis. For Grizzlies fans worried that this would spoil your team’s draft pick, Hollinger projects a decrease in wins (by five).

For Washington (25-19), Evans would anchor the second unit. The Wizards need someone to take playmaking pressure off John Wall and Bradley Beal, and Tyreke would be a terrific option for that job. Even if Evans struggled to adapt to what would figure to be a reduced role, he would be an upgrade over Tim Frazier — and injury insurance so that Wall could take time to rest and recover from minor ailments rather than play through stuff down the stretch of the regular season. If the Wizards are going to shake things up in the Eastern Conference playoffs, they need Wall (and Beal) to be at full strength, not burnt out from fighting tooth and nail for home-court advantage. Essentially swapping their first round pick with Memphis’s early-to-mid second round selection seems pretty reasonable in exchange for Evans, who looks like one of the best short-term rentals on the market.