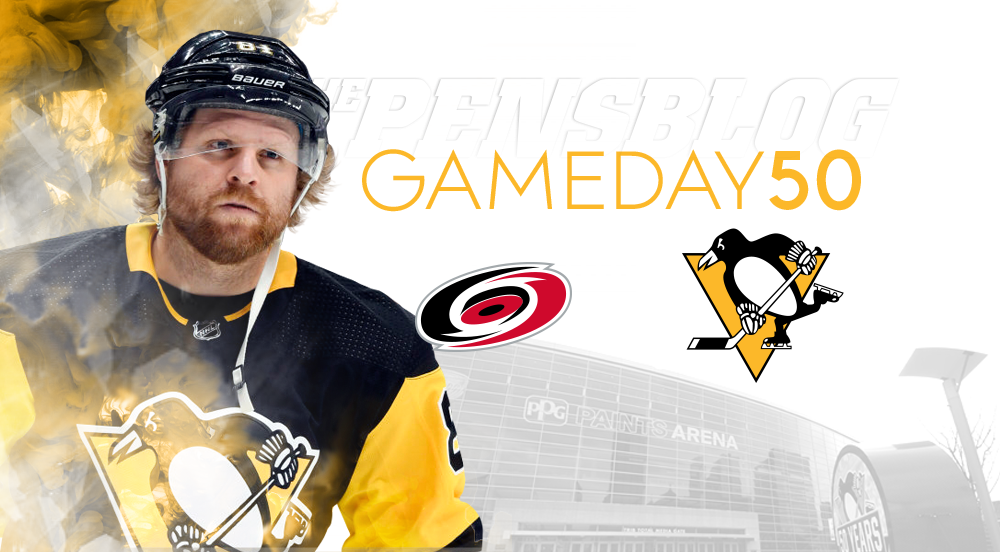 The Penguins are back in Pittsburgh after their annual west coast swing through California. Life wasn’t all swimsuits and beaches for the Pens in Cali as they dropped two of three games in regulation, fell out of love with Daniel Sprong, and once again find themselves staring up at the bar that demarcates who is still playing come April 10th. There is a lot to digest with the Penguins at the moment so lets start with some of the background issues before diving into tonight.

One way to get a few much needed points would be by handling the Hurricanes in Pittsburgh tonight. If you recall the Hurricanes were ahead of the Penguins going into the Christmas break and everyone was freaking out. Oddly enough the ‘Canes slowly returned injured players to their lineup and now find themselves dropping games and playing their worst hockey of the year. One thing Pittsburgh teams have never been good at is kicking a team when they are down, every time a black and gold team plays an inferior opponent it becomes a nail biter instead of a stomping. Tonight would be a damn good time to break that trend.

There is a chance that either Rust or Murray (or both) return to the lineup tonight. In the case of a Rust return it will be interesting to see who Sullivan sits out since he can only bench Cole once per game. The return of Justin Williams to the Hurricanes roster has moved Jeff Skinner to the third line which is an interesting decision, though I’m not so sure their second line is truly a second line. Also note that Mckeown was reassigned to the AHL yesterday so he will not be the third pairing defender for Carolina tonight, whatever.

FOR PITTSBURGH:     Evgeni and Sidney

Going into this game Evgeni Malkin sits with 349 career goals and Crosby has 399. Tonight, at home, in game 50 of the season as the two leaders try to will this team to the playoffs just seems like the perfect timing for goals 350 and 400 respectively. If Malkin scores in the first period then Sid will get his in the second, and I will go buy a lottery ticket.

FOR CAROLINA:     The Third Pairing

Carolina currently has Klas Dahlbeck and someone else on their third pairing and it is a match up made in heave for Sullivan’s last change at home. It wouldn’t be too surprising to see the Malkin line start the game as Sullivan tries to get Sid’s line out early against this third defensive pairing. If the Hurricanes are lucky they will draw the 3rd line all night, which still features Guentzel and Kessel so I don’t know if that is considered being lucky. If Sullivan gets that matchup he wants he will exploit this mismatch all night long. All night. All night. All night long.

The Hurricanes played two nights ago and lost 5-1 to Vegas, the Pens will have their home fans behind them for the first time in 3 games. It is somehow the 50th game of the season tonight which blows my freaking mind, but it also reminds us of how important these points are. Columbus, New Jersey, Philadelphia, Carolina, Pittsburgh, and the Rangers are all in action tonight and are all separated by 6 points. It is absolutely insane and should make for some really good hockey tonight.