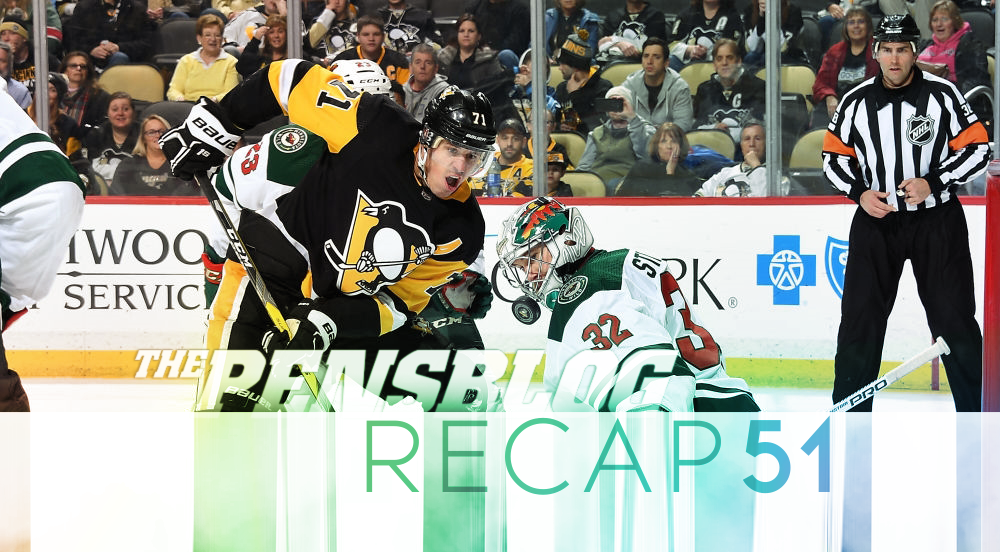 Hold onto your butts, folks, because the Penguins may be back.

That means the Pens moved to 3rd in the Metro after playing 51 games, level on points (57) with the Blue Jackets.  Of course, they’ve played 1-2 more games still than everyone around them, but that 1-2 point buffer is still everything.  This team was always a good run of form away from really taking off and building some cushion and it might appear that we’ve gotten there now, just as they always seem to do as February approaches.

If nothing else, last night’s performance was that good form in a nutshell.  It was as if the Wild put their game behind a paywall and lost all of its cultish subscribers and faded away into nothingness prior the puck drop.  In short, they got fucking hammered, which is what you’d expect from a team where careers go to die.

Consider this: The Penguins at one point had a 6-0 lead.  Most teams usually will sit back and relax a bit after 4-0 and you’ll see the game flow sway in favor of the losing team.  Not the Peng (all stats and Gameflow via Natural Stat Trick).

People that fire their employees over text message don’t even exhibit the sort of dominance the Penguins put on display last night.  At even strength, the Pens attempted 21 more shots than the Wild (55-34) while literally doubling up on scoring chances (34-17 Pens).  Despite that, the Pens still did have two players with under 50% possession numbers (Sheahan – 47.06% and Dea – 33.33 repeating of course percent), but also kept the Wild to having just 3 players at or above that 50% level (Prosser, Ennis, Eriksson Ek).

Perhaps more importantly is that we are barely halfway through Parise and Suter’s matching 13 year, $98M contracts and boy, are the 33 year olds looking like 33 year olds.  Parise, in his 11:13 of even strength ice time, was on the ice for 4 (!!!!!) shot attempts for and 23 (!!!!!!!!!!!!!!) against as well as 3 of the Pens 4 even strength goals against.  Suter was slightly better at 11 for, 17 against, and was out for just 1 of the Pens 4 even strength goals.  But then he also had both Malkin powerplay goals go in off of him, giving him 6 more goals on the season than Parise.

That is exactly the kind of stat line the State of Hockey deserves.

Cowabunga! Who's ready for hockey? pic.twitter.com/LYgPxJl3RG

No real changes to the forward group as Reeve’s was a healthy scratch for the second straight game.  Coleksiak got united and performed well (more on that later) as Hunwick was a late scratch.

Right off the hop, the Pens were buzzing.  As would be the case all night, the Pens forecheck just decimated the Wild before they ever had a chance to settle into the game.  To open the scoring, Simon-Crosby-Sheary went to work putting Minnesota through the spin cycle.  And even when it seemed they composed themselves and had a chance to exit the zone after Sheary coughed up the puck along the wall, Cole made an unreal pinch to catch Staal in possession and turn it over to 87 to walk in and put it on a platter for Simon.

Just like that, they were off and running.  At the 8:37 mark of the opening period, Zucker got himself thrown in the sin bin for tripping up Letang to give the Penguanos their first of 2 powerplays of the night.  Just over 30 seconds into it, the NHL’s best powerplay would punish the Wild after the puck cleared the zone.  Gene dropped all the way back to gather it and get a head of steam through the neutral zone to push the Wild back as they changed forwards.  He and Crosby combined for a give and go as Malkin drove straight into the heart of the Wild PK, danced behind the net, and threw the puck off Suter and in behind Dubnyk to double the lead

The Pens, despite owning the puck and mushroom stamping the entire state of Minnesota, would not make it 3-0 for another 20 minutes and change following Malkin’s tally.  New Year, New Hags would get himself in the goal column for the first time since January 14th when he was in the midst of his 5 game point streak.  Though he went 2 straight without a point coming into this one, he was in all of the right places last night, including registering 5 shots in 17:58 of ice time.

Once more, it was the Pens forecheck that started the whole thing.  Guentzel, at the end of his shift, forced Brodin to send the puck back behind the net to Dumba before going for a change.  Phil chased it down and put Dumba under pressure, forcing him to just throw the puck up the wall in the direction of Eriksson Ek.  Cole again made a great pinch to force yet another turnover for Phil to drop off to Gene.  Hags knew where to go as he jumped off the bench unchecked to finish off the Malkin feed.

But Hagelin wasn’t done yet.  About 90 seconds later, he’d combine with Crosby to tame the Wild.  Minnesota had one of their few chances go by the wayside as DeSmith kicked a shot out to Crosby on the right side of the zone.  Sid, Sheary, and Hags exploded on a 3v2 the other way with Dumo recognizing he could release and jump in behind them.  Sheary took his man to the net to open up the lane for 87 to hit 62.  Hot Carl got it back to Sid with Spurgeon the Sturgeon going down to block the shot.  Dubnyk was scrambling and Crosby hit Dumo with a quick touch pass for Dumoulin to net his 3 of the year.  Sexy, sexy sequence.  Just shows how quickly and dangerously the Pens can slaughter teams on the break.

About 4 minutes later, though, with the game already wrapped up, Minnesota thought they had pulled one back with Hornqvist in the box for closing his hand on the puck.  Koivu, in trying to get to the front of the net and screen DeSmith, ended up interfering with DeSmith’s stick as Brodin’s point shot came in.  HCMS challenged and won, negating the goal and giving his team a 4-0 lead heading into the second intermission.

It would provide his squad a chance to preserve DeSmith’s shutout bid and extend their death grip on the game.  Just 1:28 into the final frame, Dumba found himself locked up in a cage for slashing Hagelin to give the Pens just their 2nd and final PP of the game.  That is both a dumb and stupid thing to do.  With Phil! holding in an attempted clear, he worked it up high to Jultz at the point before he dished it over toe 71 on the half wall.  Crosby was lurking in front and that’s where Malkin went with it, trying to get him his 400th career goal.  Ryan Suter had other visions…again.

Under a minute later, Simon and the Pens would strike again.  Even up 5 goals, Crosby wasn’t coasting around letting the Wild just exit their own zone with ease.  He’d chase some guy named Rau down from behind, steal the puck like he was Pavel Datsyuk, and get it to Sheary at the blueline to get it into the zone.  Crosby kept churning and forced Staal to just fling it up the boards where Simon was crashing in.  He’d knock the puck down, walk into the slot, and wire a shot past Stalock’s ear to cap the Pens scoring.

What a goddamn release from Top Six Winger Dominik Simon, who is definitely not Dominik Uher.

With the game having been wrapped up with a nice little bow on top for quite awhile, you’d be hard pressed to find a reason to blame the Pens if they gave up a goal or 3.  DeSmith’s shutout bid was still on the table, but midway through the period, Minnesota would capitalize on a D-zone turnover following a decent forecheck of their own.  Foligno gathered the puck as the Pens were reeling, finding Prosser for the point shot through traffic.  Up 6-0, Crosby was still out there blocking shots because #leadership, but on this occasion his blocked shot ended up on the stick of Eric Staal to turn and fire one behind DeSmith.  Tough break.

About a minute and a half later, JS Dea found himself in the box for slashing Ennis to give the Wild their 5th and final PP of the game.  A little over 30 seconds into that man advantage, they’d catch the Pens chasing the puck in their own zone like someone chases girls to bang their wife while they watch in the corner.  DeSmith would eventually stop Suter’s shot from the point, but Granlund was left all alone in front to collect the rebound and deposit it home.

Under a minute later, Brodin would get his disallowed goal back to cut the Pens lead in half in what would prove to be the last goal of the game.  Once again, the Wild had their forecheck going as they chased down a blocked down Staal slot shot.  Unlimited traffic in front as Foligno got it to Brodin for the wrister from the point.

Crosby and Letang head out to Tampa for All Star weekend this weekend while the rest of the team gets another little break in the schedule before playing host to the Shorks on Tuesday night.  LGP.